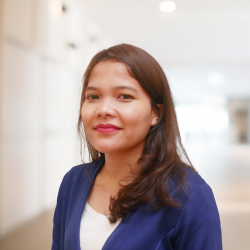 Research is the core of our work; in IESR, we believe in evidence-based advocacy. As a leader of this team, her work revolves around the generation, transmission, and storage technology assessments, power system and grid modeling, and grid integration study that would help prepare the state-owned utility in Indonesia (PLN) for integrating more renewables into the national grid.

Pamela is an experienced professional in the energy sector. She started her career as an engineer in a multinational oil and gas engineering company for more than two years before deciding to leave the industry as she learned about climate change. She also has experience in conducting a study of State Energy Plans in the United States. Her current interests include increasing the deployment of renewable energy and public awareness of climate change in Indonesia.

She holds a Bachelor of Science in Electrical Engineering from Bandung Institute of Technology and a Master of Engineering in Energy, Environmental & Chemical Engineering from Washington University, where she learned about renewable energy technologies such as solar PV and wind turbines. In her spare time, she loves to read books and get involved in volunteering activities.