Since signing the Paris Agreement in 2015, Indonesia has begun to prepare a Nationally Determined Contribution (NDC) document as an official statement for its emission reduction commitments. Indonesia’s first NDC was submitted to the UNFCCC in 2016. Along the way, many parties considered that the NDC owned by Indonesia had not been able to answer the challenges of the climate crisis and efforts to reduce emissions.

In 2021, with input from various parties, Indonesia will update its NDC document. In terms of emission reduction targets, nothing has changed, but the most noticeable difference is that various adjustments have been made to the 2020-2024 RPJMN and Indonesia’s Vision 2045. In addition, the Ministry of Environment and Forestry (KLHK) has also issued a Long Term Strategy document to complement this latest NDC. Other things added to the latest Indonesian NDC can be seen in the following comparison table.

In the latest document, the Government of Indonesia describes 3 climate change risk mitigation scenarios, namely CPOS (Current Policy Scenario), TRNS (Transition Scenario), and LCCP (Low Carbon scenario Compatible with Paris Agreement). In addition to emission reduction targets, these three scenarios have a direct impact on per capita income and investment costs that must be paid by the government.

Indonesia’s steps to improve its NDC have drawn appreciation and criticism. Appreciation is given for efforts to clarify points that have not been included in the NDC document, such as aspects of gender equality and decent work, adding a Long Term strategy (LTS) document, and including Indonesia’s commitment to the International Convention on adaptation.

On the other hand, criticism comes because the ambition to reduce emissions has not increased from the previous document. The emission reduction target in Indonesia’s NDC does not reflect the sense of urgency to respond to the current climate crisis. In fact, the IPCC AR6 report launched in August 2021 states that the time to prevent the earth’s temperature from rising below 2 degrees Celsius is less than a decade away. As one of the top 10 largest emitting countries in the world, Indonesia should be even more ambitious in reducing its emissions.

In addition, in the energy sector in the electricity sub-sector, coal-fired power plants that produce high emissions will still be chosen as a source of power generation even until 2050. However, the reasons for choosing CCS/CCUS technology implementation, both technically and economically, are not explained in detail. It also does not explain the differences in assumptions used between CPOS, TRNS, and LCCP scenarios. The lack of transparency regarding the assumptions used in this document makes it difficult for academics, policy makers, or the general public to study this LTS – LCCR document

IESR considers that the importance of increasing climate ambition is not only to fulfill international agreement commitments but also to realize national economic resilience and mitigate the risk of large costs incurred to fix climate problems in the future. In response to this, IESR compiled a recommendation for the President of the Republic of Indonesia regarding the updating of Indonesia’s Nationally Determined Contribution (NDC) 2021 which can be downloaded as follows IESR Recommendation to President Joko Widodo on Updating NDC – IESR

Jakarta, September 29, 2021 – Indonesia has set its target on achieving a carbon neutral target by 2060 or sooner. One strategy is to use renewable energy. Encouraging the optimization of renewable energy development in Indonesia and providing a clear legal basis. The House of Representatives of the Republic of Indonesia has the initiative to draft the New and Renewable Energy Bill (EBT Bill). However, along the way, the EBT Bill still contains elements of fossil energy which has drawn protests from the Youth Coalition for Renewable Energy.

“Initially, the EBT Bill raised our hopes about the development of renewable energy as a mitigation measure for the climate crisis, but our hopes have faded because the current EBT Bill includes unclean energy sources. Here, Indonesia’s commitment to the energy transition and reducing its emissions is questionable,” explained Satrio Swandiko Prillianto, representative of the Youth Coalition Concerned for Renewable Energy at the webinar ‘Youth Aspirations for a Fair EBT Bill’, which was supported by the Institute for Essential Services Reform (IESR).

Not only that, through Satrio, this Coalition that consisting of students from various universities in Indonesia, also summarized their 3 points of objection to the EBT Bill as follows: 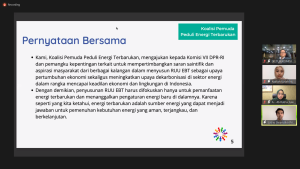 Sugeng Suparwoto, Chairman of Commission VII DPR RI on the same occasion stated that the long process of making the New Renewable Energy Law has now reached the synchronization stage in the legislative body of the DPR RI. It is planned that this law will be completed by the end of 2021. He explained that this bill is important to deal with energy problems in Indonesia.

“Our fossil energy reserves are low, besides that it is also polluting because it produces high carbon emissions, so we need to switch to renewable energy and need a strong legal basis for the development of the ecosystem,” explained Sugeng.

Although the EBT Bill is not yet perfect, Ratna Juwita Sari, a member of Commission VII DPR RI believes that this EBT Bill will ensure that the energy system in Indonesia to be strong, independent, sufficient, affordable, fair and sustainable, and clean.

“We are aware that some articles still raise pros and cons, such as the chapter on nuclear, but the impact of this bill socially, economically and environmentally will be large and good,” explained Ratna.

The government has facilitated a clause to reduce parallel capacity costs for industrial customers from 40 hours to five hours per month. In the future, the economy will grow in a greener direction, supported by a green industry. Fabby Tumiwa said the industrial and commercial sectors must have an energy transition roadmap to achieve decarbonization and climate control

The IESR market survey shows that there is a potential of 9.8 percent or 16 thousand businesses in Central Java to utilize rooftop solar power. The total installed PLST capacity in Central Java until August 2021 reaches 8.8 Mega Watt peak (MWp). In realizing decarbonization, it is important for industry and commercial to have an energy transition roadmap

The Indonesian Mining & Energy Forum (IMEF) assesses that the moratorium on the construction of the New PLTU has no impact on coal miners, where the demand for coal from the PLTU until 2030 is still quite high at around 157 million tons per year. However, considering that the coal mining industry is still supported by export demand, it is important to look at the decarbonization policies of coal importing countries as an illustration of the future of Indonesia’s coal.