Executive Director of the Institute for Essential Service Reform (IESR) Fabby Tumiwa said that the use of EBT will also produce green products. Besides being able to reduce the use of fossil energy in the industry, NRE is believed to be able to absorb and create new jobs. Meanwhile, International Renewable Energy or IRENA noted that the renewable energy sector last year created 11.5 million jobs globally of which 3.8 million jobs came from solar energy.

The Institute for Essential Services Reform (IESR) provides an illustration that a trip using a gasoline or diesel-fueled car as far as 1 km will produce as much as 200 grams of CO2 emissions. These data indicate that a reduction in mobility can have a significant positive impact on reducing carbon emissions from the transportation sector.

Jakarta, 21 October 2021 – In the 26th Conference of Parties to be held in Glasgow on 31 October – 10 November 2021, the Government of Indonesia carries four main agendas, namely NDC Implementation, Fulfillment/Completion of the Paris Rule Book, Long Term Strategy 2050, and Net-Zero Emission goal.

On this occasion, Indonesia will highlight the reduced rate of deforestation in the last 5 years and efforts to restore peatlands. In addition, efforts to reduce emissions in the energy sector will also be discussed, such as providing a larger portion of renewable energy in the Electricity Supply Business Plan (RUPTL).

Hari Prabowo, Director of Development, Economy and Environment, Ministry of Foreign Affairs, in the webinar entitled “The Road to COP26 A Climate Superpower Indonesia; Collaborative Efforts to Tackle Climate Crisis” organized by Katadata and Landscape Indonesia, explained that Indonesia will bring a positive and openness to take part in efforts to control climate change.

“Basically, Indonesia is ready to be part of the solution and will be leading by example. We have good achievements in the forestry sector and continue to strive to reduce emissions in various fields,” he explained.

Hari Prabowo emphasized that in overcoming the climate crisis it is time for us to avoid naming and shaming, i.e feeling that our country is better at dealing with climate change than other countries.

“We must show the initiative to play a role in tackling climate change without blaming which party should be more responsible. This climate change requires the collaboration of all parties to ensure that our big goals are achieved,” he concluded.

On the other hand, on the same occasion, the Executive Director of the Institute for Essential Services Reform (IESR), Fabby Tumiwa stated that Indonesia should be more ambitious in setting targets for climate control and emission reduction.

“If we look at the latest NDC document that was submitted to the UNFCCC, Indonesia’s main target for the energy sector is still not ambitious. To suppress the increase in the earth’s temperature to only 1.5 degrees, in 2030 IESR calculates that 70% of the power generation mix must be from renewable energy, if we look at the NDC or other plans such as the RUPTL, it seems that this target has not been achieved, “said Fabby.

Fabby agreed that the forestry and land use change (AFOLU) sector as the largest emitter (60%) in Indonesia is a priority sector to reduce emissions. However, other sectors such as energy are predicted to produce greater emissions than the AFOLU after 2024-2025, and by 2030 will become the dominant emission source in Indonesia, thus it requires special attention and strategies for reducing emissions in the energy sector.

Fabby also mentioned that the financial need for climate management is huge. In the energy sector alone, it takes USD 30-40 billion per year until 2030. The next period, 2030-2050 investment needs will increase to USD 50-60 billion per year. Indonesia must pursue the commitment of developed countries to provide financial assistance for the climate crisis to developing countries.

Dharsono Hartono, President Director of Rimba Makmur Utama, added that Indonesia has a strategic role in climate crisis control diplomacy. According to him, as a country that has a large tropical rain forest and the largest peatland area, Indonesia’s responsibility in maintaining the increase in the earth’s temperature is very crucial.

“Without Indonesia contributing to global efforts to tackle climate change, the target of the Paris Agreement will not be achieved,” said Dharsono.

Jakarta, 19 October 2021 – Two weeks before the Conference of the Parties (COP) 26 in Glasgow, climate issues are widely discussed in Indonesia, one of which is to raise public voices and provide input to the Indonesian government, which is planned to be attended by President Joko Widodo to increase Indonesia’s climate ambitions.

Indonesia has renewed its climate commitments through the Nationally Determined Contributions (NDC) document which is complemented by the LTS-LCCR (Long Term Strategy – Low Carbon Climate Resilience) document. In terms of numbers, Indonesia did not raise its ambition any further, namely to stay at 29% with its own efforts and 41% with international assistance. Indonesia is also committed to becoming net-zero emissions by 2060 or sooner. Unfortunately, this effort is not enough to bring Indonesia to keep the earth’s average temperature increase of no more than 1.5 degrees Celsius.

In a webinar entitled “Towards COP26: Climate change and the role of the public in preserving the earth”, Fabby Tumiwa, Executive Director of the Institute of Essential Services Reform (IESR) explained that since the 1880s Indonesia has always been included in the top 10 largest emitting countries (Carbon Brief).

“We should see this responsibility to reduce emissions not as a burden but also as an opportunity to carry out a low-carbon economic transformation. The results of the IESR study show that decarbonization in 2050 will actually bring greater economic benefits, because in addition to creating new industrial opportunities and greater employment, Indonesia’s energy prices will be more affordable as well as social and economic benefits that can be felt such as cleaner air and reduce the threat of hydrometeorological disasters due to climate change,” explained Fabby.

Muhamad Ali Yusuf, Chairman of the Nahdlatul Ulama (NU) Disaster Management and Climate Change Institute, explained that in terms of religious-based community organizations communicating the issue of climate change is challenging because the public in general will care about the problems that are in front of their eyes, so we need down to earths and contextual way to talk about climate change in the community.

“On the other hand, our religious discourse is still far from ecological issues such as climate change. Even if it already exists, it has not become a priority issue. So actually literacy on climate change is also necessary for religious leaders,” he explained. 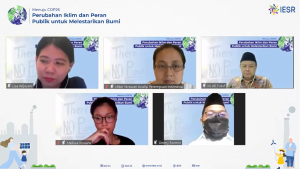 Executive Secretary for Witness and Integrity of Creation, Communion of Indonesian Churches (PGI), Pastor Jimmy Sormin added that religious leaders and figures have a strategic role to influence the views and behavior of the people and have a significant impact on influencing people’s mindsets and perspectives.

“So you must be creative to convey climate change,” explained Pastor Jimmy.

Information on climate change must be disseminated to the wider community without exception, because when the impacts of climate change such as hydrometeorological disasters appear, all residents will be affected.

Mike Verawati, Secretary General, Indonesian Women’s Coalition, explained that women are the ones most affected by climate change because our policies and systems are not inclusive. Citizens’ needs are seen as neutral needs.

“Climate, infrastructure, and nature issues are usually considered as big narratives or masculine issues, so in the end this issue is considered not a women’s issue even though they know the details and are actively advocating, even though sometimes they can’t explain it scientifically,” explained Mike.

Not only women but young people also need to be involved in policy-making efforts to tackle climate change. As the generation that will live in the future, it is these young people who will bear the impact of the climate crisis that is not taken seriously in the future.

Melissa also highlighted the lack of literacy about climate change for the wider community. This makes people seem silent or passive because they do not understand the context.