Jakarta, March 4, 2022- The House of Representatives of the Republic of Indonesia (DPR RI) has submitted the Draft  Bill on New and Renewable Energy (RUU NRE) to the Legislation Agency (Baleg) for harmonization. However, the aspirations and needs of the community such as women’s groups (and also communities in the 3T area-Frontier, Outermost, Disadvantaged) as well as the gender approach have not been reflected in the existing draft of the NRE Bill. Therefore, the Indonesian Women’s Coalition (KPI) in collaboration with the Institute for Essential Services Reform (IESR) held a webinar entitled “The NRE Bill: A Further Look at Gender Perspectives Accommodated in Energy Policy”.

Energy plays an essential part in women’s lives, which are closely related to household activities. The use of this type of energy will affect the productivity and lives of women. The type of energy that is full of emissions and pollution will harm women’s health and the environment, especially in 3T areas in Indonesia. Besides, women have only been positioned as energy consumers, even though there should be opportunities for the general public, including at home, to produce energy and use it themselves.

Addressing women’s need for energy, KPI encourages the DPR RI and the government to see women as energy producers. Moreover, in terms of energy policy, KPI urges to develop clean affordable renewable energy that can be found locally instead of relying on fossil and nuclear energy. 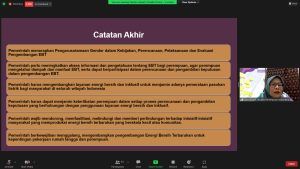 Dian Aryani, National Presidium of the Indonesian Women’s Coalition of  Farmer Families speaks on her concern that women are often not involved and trained in NRE energy development. She also views the NRE terminology as inappropriate. She said instead of developing new energy, it is better to focus on utilizing clean energy that does not contain pollutants and renewable energy. The existence of an article that regulates the protection of community initiatives in building, developing, and utilizing renewable clean energy is crucial, especially for the household scale and non-commercial community scale.

“Furthermore, the government needs to implement gender mainstreaming in policies, planning, implementation,  and evaluation of NRE development,” she added.

Maftuh Muhtadi, Ministry of Women’s Empowerment and Child Protection (KPPPA) in his presentation acknowledged that women are still seen as the main consumers of electrical energy.

“So far, energy management has always been attached to women’s responsibilities regarding their domestic roles. Energy consumption tends to be inefficient and the role of women is important to improve the efficiency of energy use and management,” he explained.

Highlighting that there is still a portion of fossil energy in the NRE Bill in the form of coal downstream, Maftuh cannot one hundred percent refuse fossil energy. He stated that the most important thing is to ensure that the production, distribution, and consumption of energy have few negative effects.

On the other hand, Mohamad Yadi Sofyan Noor, Head of the Mainstay Farmers and Fishermen Contact (KTNA) views that including nuclear energy in the NRE Bill is not a wise action. His party objects to the construction of nuclear power plants because it has the potential to harm the economy of farmers and fishermen.

Rinaldy Dalimi, the Expert Council of the Indonesian Renewable Energy Society (METI) said that the presence of nuclear energy in the NRE Bill would complicate the development and exploitation of renewable energy.

“The NRE Bill, if studied in more depth, will not be passed soon because at least the central government should consider building 5 new institutions, and must provide various incentives and radioactive waste disposal sites,” he added.

Rinaldy believes that in the future there will be a time when everyone can produce their energy, it won’t be a concern to the government.  Energy will become a household matter. Thus, the role of women will be crucial in managing the energy sector.

Sugeng Suparwoto, Chairman of Commission VII DPR RI on the same event informed that the NRE Bill in the next 3 months can already be ratified. He also stated the development of renewable energy is a must. However, he admitted some challenges in developing NRE, such as the big political power still leaning towards fossil energy.

Sugeng explained that in the process of drafting the NRE Bill, the participation of all stakeholders, including the involvement of women, had been carried out. Responding to the nuclear issue in the NRE Bill, although he stated that he was open to any suggestions and input, he repeatedly explained that nuclear is one of the technology options with minimal emissions.