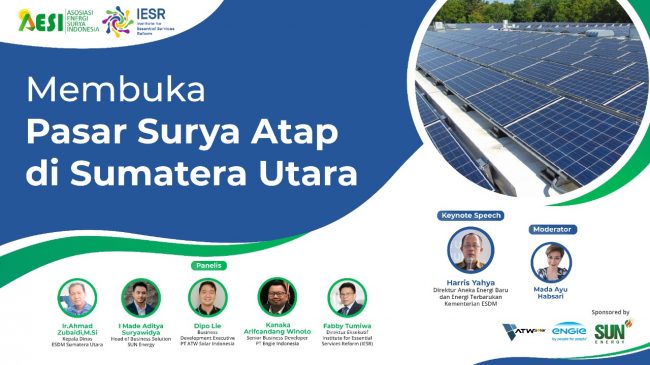 The International Renewable Energy Agency (IRENA) reports that renewable energy (RE) has made up the majority of capacity additions for the last eight years. Its progress is in line with the development of innovation and competition in RE technology, which makes the price of RE cheaper than fossil energy in 85% of countries in the world. Moreover, in the UN Climate Action Pathway for Energy, IRENA maps that in 2025 all coal mining in the world will experience a drastic decline because it is no longer economical compared to RE.

The massive movement of the transition of fossil energy to RE or known as this energy transition was also recognized by Harris Yahya, Director of Various New and Renewable Energy. He explained the development of RE, especially solar energy, in the online event Opening the Solar Roof Market in North Sumatra. This event was organized by the Institute for Essential Services Reform (IESR) in collaboration with the Indonesian Solar Energy Association (Asosiasi Energi Surya Indonesia-AESI) and the Indonesian Employers’ Association (Asosiasi Pengusaha Indonesia-APINDO) North Sumatra in continuing the campaign for the National Movement of One Million Roofs (Gerakan Nasional Sejuta Surya Atap – GNSSA) which turned three years in last September. Following Central Java, which has committed itself as a solar province, AESI is now encouraging North Sumatra to utilize the potential of RE to meet its energy needs.

Harris explained that Indonesia is working on achieving the 23% RE mix target by 2025, while the accomplishment has been only 10.9%.

“One possible way to reach up with the RE energy mix is ​​by implementing solar power plants. Thus, the domestic industry can sustain with the RE industry, especially solar power, and it can open up green job opportunities and reduce CO2 emissions, “he said.

Harris believes that after the president signed the draft of the Presidential Decree regarding RE, the solar power plant will expand extensively. The provision of solar power plants is not only for PLN as a utility-scale but also for replacing diesel generators.

“We plan to use RE to substitute diesel power plants of up to 2,600 MW, either with solar or biomass energy,” Harris explained.

Irwansyah Putra, General Manager of the North Sumatra Regional Main Unit PLN, who was also in the discussion, said that his party fully supports government policies that encourage the development of solar power plants in North Sumatra.

On the same occasion, Fabby Tumiwa, Executive Director of IESR, underlined the immense potential of solar energy in Indonesia based on the results of the IESR study.

“Looking at the existing land capacity, the potential for installing solar power plants by utilizing ground mounting (open land) could reach 9,000 GWp with the potential to generate up to 13,000 TWh/year. With this huge potential, Indonesia can meet 100% of its energy needs from solar energy. The potential for rooftop solar in house buildings alone reaches 655 GWp, “he said.

The North Sumatra Energy and Mineral Resources (ESDM) Office, represented by Karlo Purba, Head of the Electricity Sector, explained that his party has begun to implement a strategy for using rooftop solar as stated in the draft RUED-P (Provincial Regional Energy General Plan) by setting the regulation to utilize solar cells at a minimum of 30% of government buildings, and 25% for luxury housing complexes, and apartments. He hopes to increase the interest of the public and commercial and industrial groups as well.

“The most favorite payment method is the performance-based rating scheme. Customers do not need to spend money on the initial investment in rooftop solar. The rooftop solar system will become fully owned by the customer after the contract ends, ”explained I Made Aditya Suryawidya, SUN Energy’s Head of Business Solutions.