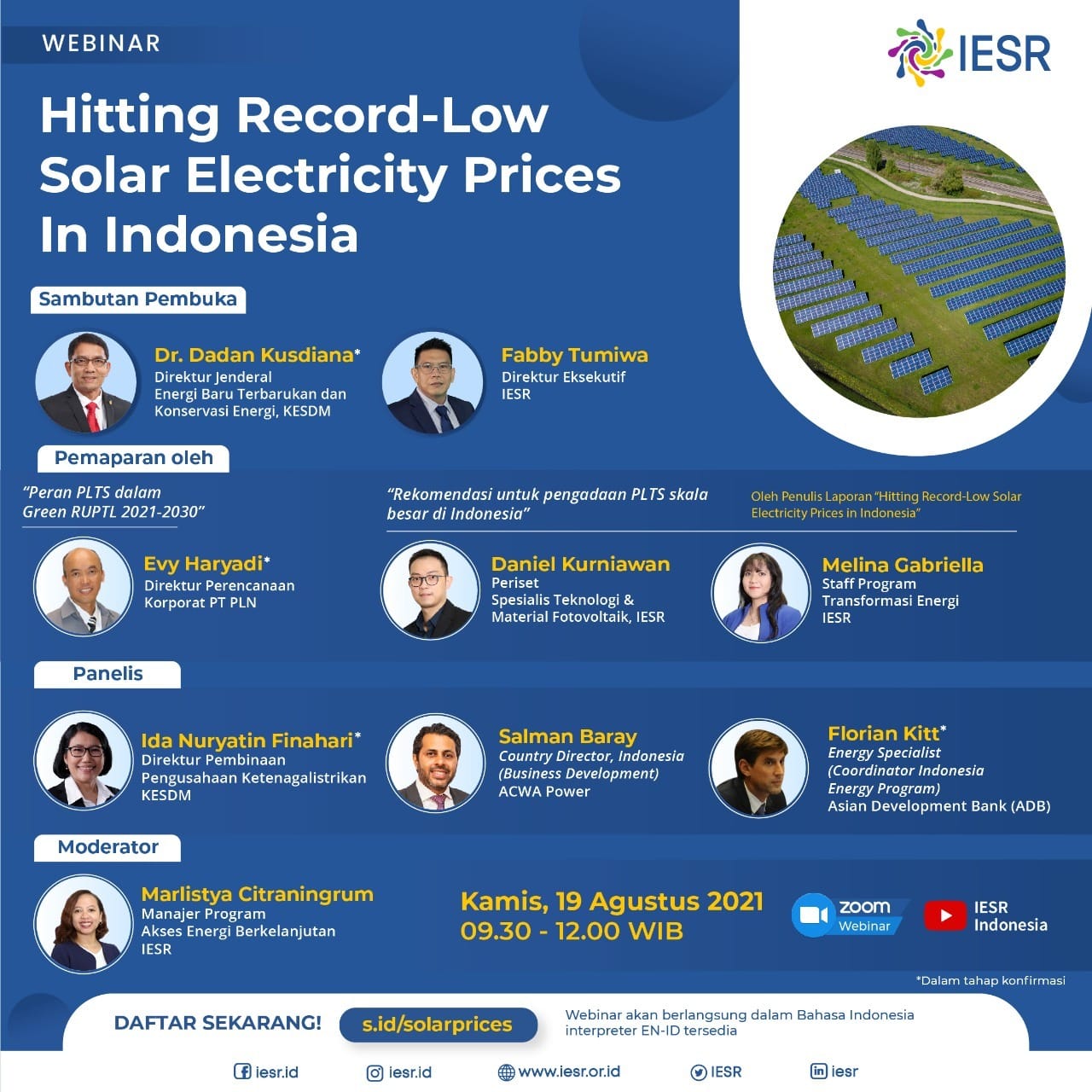 Indonesia has ratified the Paris Agreement through Law no 16/2016. As a result, Indonesia is legally binding to contribute to the global struggle of climate change through ambitious efforts and action in mitigating Greenhouse Gas (GHG) emissions and limiting the increase of the global temperature below 1.5 0C. In one of the IPCC climate model results for limiting the rise of the global temperature below 1.5 0C, the total Greenhouse Gas (GHG) emission must decrease by 45% in 2030 compared to 2010 and reach net zero emission by 2050. As of now, Indonesia is amongst the top 10 greenhouse gas (GHG) emitters and is still projected to increase its emissions with the energy sector as the highest GHG contributor by 2030.

Indonesia’s power sector emission holds the key to increase the country’s climate ambition in reducing the GHG emission. However, the power sector outlook is uncertain as the stakeholders are still waiting for the power sector plan (Rencana Usaha Penyediaan Tenaga Listrik/RUPTL) 2021-2030 to become official. On the other hand, the Ministry of Energy and Mineral Resources (MEMR) has stated in May that the government intends on transforming the long-awaited RUPTL into “green RUPTL”, claiming the increase of renewable energy portion from 30% in RUPTL 2019-2028 into 48% in the latest draft[1]. It is also revealed that there is about 6 GW of solar power out of 41 GW being planned (1.4 GW is final, 4.6 GW is still under discussion) in the so-called green RUPTL[2].

International Energy Agency (IEA), on its annual flagship World Energy Outlook (WEO), has proclaimed that solar is the new king of electricity. In the same report, IEA forecasted that, under the Sustainable Development Scenario, the Levelized cost of electricity (LCOE) of the solar power plant would decrease into between 15-30 USD/MWh by 2040[3]. An electricity system comprised of solar power plants would provide the most competitive price in the future.

Indonesia could also benefit from a higher portion of solar energy in their power sector planning. However, the utility-scale solar in Indonesia is currently procured using a standalone, one-off auction by means of a traditional request for proposal (RFP) by the state-owned utility PLN that is often lacking in size and regularity. With the upcoming green RUPTL that has put large-scale solar in the development plan, it has become more important to improve the procurement process. To drive the cost of solar electricity down following the global trend, PLN and the regulator would need to set up a large-scale and transparent procurement process. A combination of large-scale and transparent targets with a well-designed auction process has been proven to encourage competitive biddings and eventually lead to a decline in price.

It is critical that Indonesia could take advantage of the rapidly declining cost of renewable energy, especially solar. Solar energy could be key in achieving a more affordable electricity price which would then help foster a more sustainable economic growth and serve quality energy access for the public. This webinar will discuss what is the current expectation on the role of solar energy in the power sector, and how would Indonesia able to procure electricity from solar in the most competitive price.