Indonesia has ratified the Paris Agreement through Law no 16/2016 which means that Indonesia has committed itself to addressing climate change challenges by supporting global efforts to limit the increase in average temperature by 1.5 0C below the pre-industrial average temperature level. In one of the IPCC models, to limit the increase in temperature below 1.5 0C, GHG emissions must be reduced by 45% in 2030 compared to GHG emission levels in 2010, and reach net zero in 2050. In this commitment, the Indonesian government has expressed its aspiration to achieve net zero in 2060 or earlier.

On the other hand, most of Indonesia’s CFPPs are just under 10 years old. In fact, around 13.8 GW has just started operating in the decade leading to 2030 (PLN RUPTL 2021-2030). Retiring all CFPPs in the next decade will require high costs and can also threaten the stability of the electricity system, especially if renewable energy plants are not yet ready to be massively developed to replace the PLTU.

Based on the reasons above, IESR conducted a study related to the implementation of the flexible operation of CFPP in Indonesia. It is important to ensure that the adoption of flexible operations is solely to improve the renewable energy mix in the energy transition process while ensuring the reduction of greenhouse gas emissions to comply with the Paris Agreement. The study entitled “An Analysis on Operating Coal-Fired Power Plants Flexibly to Further Integrate Renewables into Indonesia’s Power System” was prepared to take a deeper look at the greenhouse gas mitigation aspects and the role of PLTU operations, especially if made more flexible as a (temporary) strategy. to integrate renewable energy. 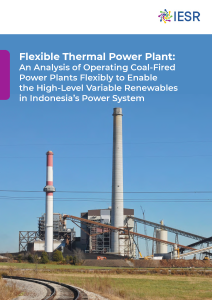