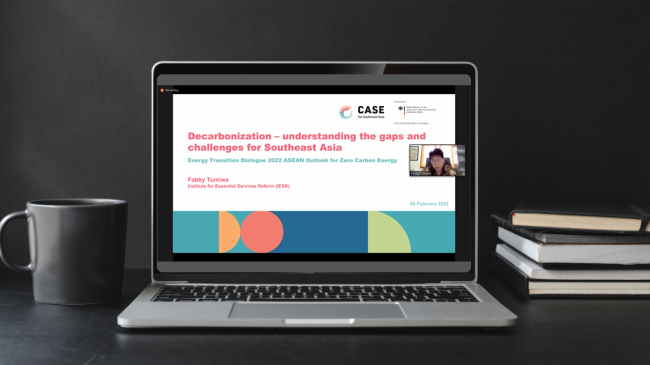 Jakarta, 9 February 2022 – ASEAN is one of the most populated regions in which the economy is growing and energy demand grows rapidly. Economic growth emerged at time when there was a global effort to reduce greenhouse gas emissions. To maintain economic development and energy demand growth, a cleaner energy system should be developed by the government. The current situation shows that Southeast Asia’s energy system still relies on fossil fuels i.e coal.

To identify the challenges and opportunities, representatives of Indonesia, the Philippines, and Vietnam present in Energy Transition Dialogue hosted by Australia National University in Collaboration with CASE (Clean, Affordable, and Secure Energy) for the Southeast Asia project on Wednesday, 9 February 2022.

Sirpa Jarvenpaa from the Energy Transition Partnership highlighted that if the policies continue as they are (business as usual) the economy and energy growth in Southeast Asia will at the same time pollute the region as well as the world. She also emphasized the importance of knowledge for policy makers in order to establish strong commitment.

“Ambitious climate projects founded in knowledge so we need to encourage the business sector to make those investments in energy transition, and for the government to create conducive investment environments, as well as streamlining regulatory and legal framework,” she said.

Sirpa added that Southeast Asia needs to ramp up investment in renewable energy and energy efficiency to ensure a clean and healthy future for the region and the world.

Though 8 of 10 countries in the region have already announced their net-zero target, the earliest 2050 and latest 2065 – coal-fired power plant generation is still expanding in Southeast Asia, especially in Indonesia, the Philippines, and Vietnam according to the International Energy Agency (IEA). It means that greenhouse gas emissions for the Southeast Asia region are yet to peak. 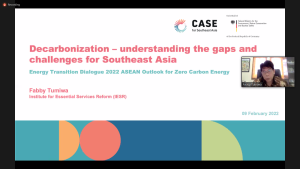 Fabby Tumiwa, Executive Director of Institute for Essential Services Reform (IESR), explained that there are a set of challenges for reaching net-zero emissions in the region such as policy, grid, and regional market integration, as well as non-technical issues related to perception and knowledge sharing. Long-term energy planning still relies on fossils even though policy says to reduce fossil usage.

“Fossil fuels are still considered as the main components of energy security, and renewables continue to be perceived as unreliable and expensive,” Fabby explained.

Fabby also stressed out the ‘just transition’ aspect as a thing to be kept in mind especially to regions heavily reliant on the coal industry.  East Kalimantan, for instance, is one of the biggest coal producers provinces in Indonesia. When the global coal price declines to below USD 40/ton, its GDP growth halts and it affects other sectors.

“We need to identify a way in order a province’s economy will not crash once there is a massive transformation and coal is no longer needed,” he said.

Frank Jotzo from Australia National University added that the development of clean energy technology results in the declining cost of renewables installation such as solar and wind, making the transformation feasible.

“Yet, there are also challenges like how to mobilize large energy systems investments, ensuring the transition is technically successful, and how to maximize economic opportunities, and minimize social disruption,” Frank reminded.