Jakarta, August 3, 2022– CFPP early retirement needs to be done to achieve emission-free by 2050 according to the Paris Agreement commitments. A study by the Institute for Essential Services Reform (IESR) with the Center for Global Sustainability (CGS), University of Maryland and supported by Bloomberg Philanthropies found that Indonesia could accelerate the termination of Center operations in 2045 to reap wider social, economic and environmental benefits. Some of the benefits described in the study entitled “Financing Indonesia’s coal phase-out: A just and accelerated retirement pathway to net-zero” include: increasing the proportion of renewable energy in the energy mix, improving environmental and economic quality, reducing pollution, improving air quality, and lower health costs. 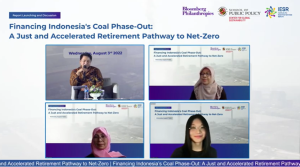 Ailun Yang, Head of International Program of  Climate and Environment, Bloomberg Philanthropies, stated that removing coal is not an easy task for every country. Ailun stated that a consistent framework and the most effective strategy were needed to stop coal use.

“That’s why this study is important to see the right scenario to be applied in Indonesia,” said Ailun.

Fabby Tumiwa, Executive Director of IESR informed that this study is the first investigation in Indonesia on coal retirement plans and their financing programs. In addition, Fabby conveyed information that last year, IESR and BNEF produced a report showing that by 2027, Solar PV battery storage capacity will produce electricity costs that are 25% cheaper than new coal plants. By 2032, the cost of generating coal plants can be exceeded by Solar PV combined with 100% battery storage.

“The gradual acceleration of the CFPP retirement will eventually give PLN the opportunity to quickly convert its brown assets into clean and renewable assets, increase productivity, and reduce the risk of abandoned assets,” said Fabby.

Fabby hopes that this study can help the Government of Indonesia and PLN to prepare for the energy transition program, especially in the formation of the Just Energy Transition Partnership (JETP).

Nathan Hultman, Director of the Global Sustainability Center, University of Maryland. Nathan explained that each country has a different strategy, but there is a possibility to switch to cleaner energy more quickly.

“By staying away from non-renewable energy, we will get more benefits in the fields of health, economy and development,” he explained.

Adding, Ryna Yiyun Cui, Assistant Research Professor, Center for Global Sustainability, University of Maryland said that to be compatible with net zero emissions and the global target of 1.5 C, Indonesia must reduce CFPP by 11% by 2030, by 90% by 2040, and completely phase it out in 2045. Furthermore, she stated that the cost of retiring the CFPP was around USD 4.6 billion until 2030. and USD 27.5 billion until 2050. “Cancelling the power purchase agreement (PPA) or the construction of a steam power plant can save up to USD 18.7 billion which can be invested alternatively in renewable energy,” she explained.

Andriah Feby Misna, Director of Aneka New and Renewable Energy, informed that early retirement of PLTU has become the government’s concern towards Net Zero Emission in 2060. She explained that an in-depth study is still needed for the timing of its implementation. She added that according to modeling , the PLTU will still operate until 2056 and if you want to encourage coal retirement in 2045, more in-depth considerations are needed.

“The government is designing a roadmap for early retirement for coal-fired power plants. The hope is that if there is international assistance, it is hoped that it will happen more quickly,” Andriah added.

On the other hand, Sinthya Roesly, Director of Finance and Risk Management, PT PLN Persero said that from a financial perspective, it is necessary to see how far the Indonesian State Budget can absorb the required costs. She added that it is necessary to prepare the market and consider the extent to which private investors will invest.

“(The cost of early retirement for PLTU-ed) is perhaps what we should calculate and look at carefully in the midst of the current oversupply . So now we first handle the over-supply and take or pay and (find) a solution so that the addition of EBT does not add to the cost,” said Sinthya.