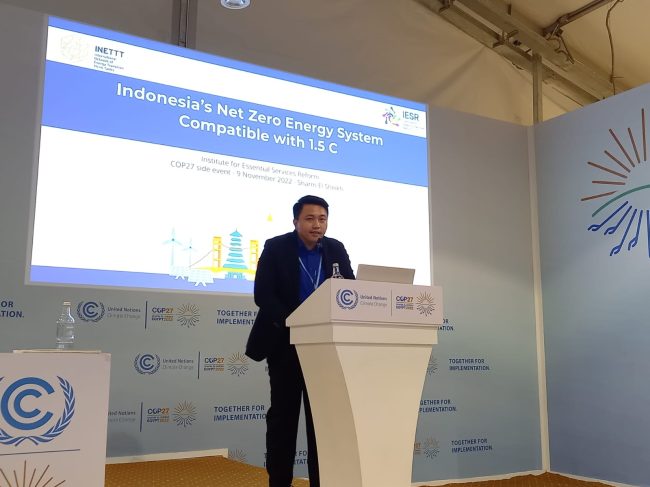 Egypt, November 9, 2022 – The ambition of countries’ climate commitments to achieve their net zero is crucial by the middle of this century. The earth’s temperature has risen significantly to 1.1 degrees Celsius after pre-industrial levels. Measuring the policies and strategies of countries to achieve zero emissions needs to be done to encourage climate mitigation in line with the Paris Agreement.

Energy Transformation Program Manager of the Institute for Essential Services Reform (IESR) , Deon Arinaldo, at the COP27 side event in Sharm El-Sheik, Egypt, with the theme “Net-0 scenarios and How to Get Them Right” organized by the International Network of Energy Transition Think Tanks (INETTT) explained, Indonesia has realized the urgency of the energy transition. It can be seen from the existence of a low-carbon development strategy from the Ministry of National Development Planning of the Republic of Indonesia. The plan will show significant benefits when Indonesia achieves its conditional Nationally Determined Contribution (NDC) target by 2030. It starts with higher economic growth, job creation, and improving the quality of health.

“The Indonesian government’s policy of providing subsidies to shield the public will burden the state budget, especially with rising commodity prices in 2022. Energy subsidies are an “obstacle” to energy transformation, reformulation of energy subsidies is a priority agenda for the government,” said Deon.

This needs to be done by considering the best policy scenario for reducing emissions in the energy system, based on the IESR study entitled “Deep Decarbonization of Indonesia’s Energy System.” Deon recommends three stages of the best policy scenario: bending the greenhouse gas emissions curve and peaking emissions by 2030. Then,  removing a significant share of emissions through energy system transformation by 2045, achieving zero emissions through an increase in green synthetic fuel production, and decarbonize industry sector by 2050.

“With this strategy, achieving zero emissions by 2050 is technically and economically feasible. It opens up opportunities to improve climate policy. Decarbonization efforts have to simultaneously ramp up the overall energy system. This decade (2020-2030) is the critical period,” explained Deon.

Nhien Ngo To, Vietnam Initiative for Energy Transition, said Vietnam had implemented a strategy of reducing emissions to net zero emissions by 2050. The plan sets the overall goal of adapting proactively and effectively. Then, minimize the vulnerability and damage caused by climate change.

“Unfortunately, there are still some challenges to face. Such as inefficient use of energy, high energy intensity, lack of financing, lack of skilled workforce for energy transition, and gaps in the coordination of key stakeholders,” said Nhien Ngo To.

Energy Programme Manager and Climate Finance Lead at GreenCape, Jack Radmore, said South Africa has a reasonably mature policy sector and plans related to a green economy and decarbonization. It could be seen in the national climate change response strategy since 2004, which has been improved and adapted over the years.

“Decarbonization is important for Turkey. Several concrete steps to realize decarbonization, such as Turkey has ratified the Paris Agreement in October 2021 and announced its ambition to achieve carbon neutrality by 2053. Turkey also has a green action plan to build its ports more environmentally friendly and expand forests and protected areas. Turkey is one of the countries that take the lead in fighting desertification and erosion,” said Al Kumba.