ISEO 2023 Launch: Encourage The Use of Solar Energy in Indonesia 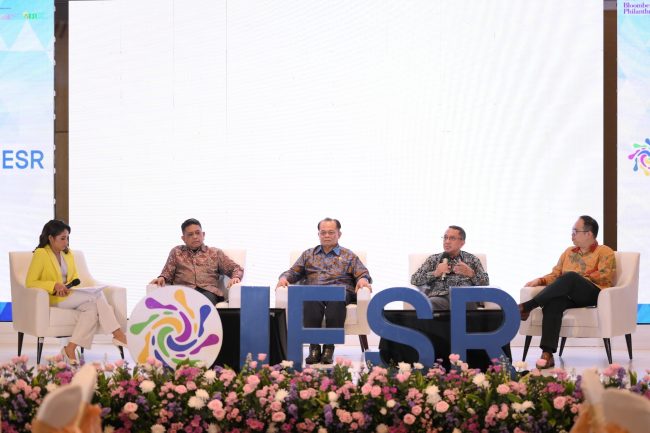 Jakarta, October 27, 2022 – The use of solar energy in Indonesia needs to be accelerated. Clear rules, support for the solar PV component production industry, and capacity building in response to human resources needs in the solar energy sector also need to be prepared.

According to data from Indonesia Solar Energy Outlook (ISEO) 2023, the installed capacity of Solar PV has increased from 43.9 MWp in 2021 to 63.5 MWp in September 2022. This number is relatively small compared to other ASEAN countries, especially Vietnam, which already belongs to the Gigawatt order.

Senda Hurmuzan Kanam, Chair of Electrical Survey and Testing Center, MEMR, measures that the installed capacity of PLTS in Indonesia is still in its early stages, around 200 MW-400 MW. He stated that Indonesia needs a closer look at Vietnam, which can install about 10 – 20 GW of solar panels annually.

“Compared to Vietnam, Indonesia is far behind. We need to look for demand opportunities for renewable energy, especially solar PV. Currently, we have an incentive program for rooftop solar systems under a Sustainable Energy Fund (SEF) grant to attract more electricity consumers to use rooftop PV mini-grid,” Senda said at the Advancing G20 Solar Leadership event and the launch of the ISEO 2023 report organized by the Institute for Essential Services Reform (IESR) with support from Bloomberg Philanthropies, and in collaboration with the International Solar Alliance, and the Indonesian Solar Energy Association.

Similarly, a member of the National Energy Council (DEN), Herman Darnel Ibrahim, mentioned that solar energy development in Indonesia is still running slowly and relatively stagnant. He argues that Indonesia needed a more transparent plan to achieve the target of 23% of the renewable energy mix by 2025 by utilizing solar power.

“At least the Electricity Supply Business Plan (RUPTL) needs to show the solar energy program, all renewable energy clearly, and mention its potential locations. Currently, the existing RUPTL only discusses all renewable energy nationally and does not mention its possible areas in detail. Moreover, the government can calculate the new economy by location and network costs. So it’s better to build a resource inventory first,” Herman stated.

Although there are several challenges to accelerating solar energy, Andhika Prastawa, Chairman of the Indonesian Solar Energy Association (AESI), said solar panel production continues to grow under certain conditions. For example, Indonesia provides a clear incentive for consumers to use domestic solar panels rather than abroad. In addition, Andhika stated that there are two ecosystems to accelerate solar energy: the utilization ecosystem and the industrial ecosystem.

“Ecosystem utilization, namely solar power, can be used in large or isolated systems. So we can extend access to electricity to all rural communities in the country. Then, the growth of this industrial ecosystem is closely related to its utilization ecosystem. To grow the industrial ecosystem, a market that can absorb solar modules is needed,” Andhika explained.

Meanwhile, Anthony Utomo, Deputy Chairperson of the Indonesian Solar Energy Association (AESI), explained that solar PV is necessary because of the decarbonization movement and the net zero emissions (NZE) approach. However, there are several challenges to intensifying solar energy.

“There are two challenges facing Indonesia. The user’s (customers) readiness to use solar PV, so we need consistent and massive education. It aligns with the National Energy Master Plan (RUEN) 2017, which became a shared consensus. It mandates a reduction in energy intensity, containing 30% of government buildings being encouraged to use solar PV, 25% luxury homes, and industrial downstream. Second, the competencies of solar PVinstallation personnel to develop the electrical system installation of the solar power plant. There is a need to provide solar preneurs or green MSMEs so that they can welcome the phenomenon of using rooftop solar PV in all regions, ” Anthony said.

The Institute for Essential Services Reform has consistently noted the progress and challenges of developing solar energy in the energy transition framework in the Indonesia Energy Transition Outlook (IETO). However, in 2023, IESR launched a progress report on solar power in Indonesia separately in the Indonesia Solar Energy Outlook (ISEO) 2023.