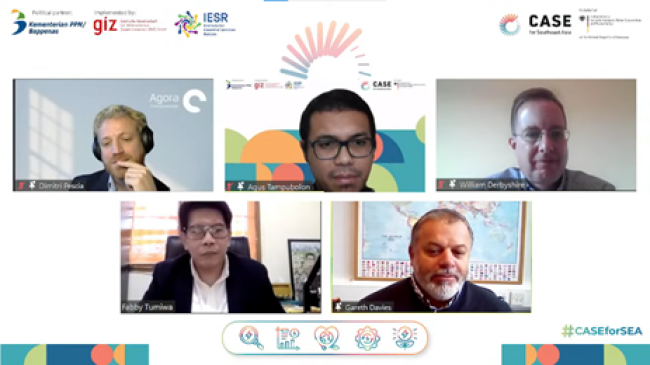 Jakarta, October 11, 2021 – In recent months, many media have reported on the energy crisis in Europe. In the UK, for example, many electric and gas utility companies went bankrupt and were forced to close. People are also seen queuing at gas stations to buy fuel. This phenomenon shows us that even countries with strong economies are still quite vulnerable to energy security issues.

CASE for Southeast Asia Project held a discussion entitled “Energy Crisis in UK and Europe: Lessons Learned for Indonesia’s Energy Transition” which invited speakers from the UK and Europe (11/10/2021). In this discussion, the public in Indonesia is involved in the discussion to find out various important facts and findings related to the issue of the energy crisis that is currently happening in the UK and Europe.

In the UK the, industrial and household sectors are quite dependent on natural gas. With the winter season is approaching, the demand for gas is increasing as the need to warm homes also increases. This condition, when a country relies heavily on energy sources that are vulnerable to global markets, does raise a question: is this really an energy crisis, or is it a fossil energy crisis?

William Derbyshire, Director of Economic Consulting Associates (ECA), UK, on this occasion gave an explanation regarding the fact that the primary energy mix in the UK relies on natural gas as much as 42%. Furthermore, William also showed data that illustrates that since 2017, the price of natural gas has gradually increased until 2021, which has resulted in an increase in the selling price of electricity.

“If high fossil fuel prices are the problem, then the answer is reducing dependence on coal and gas, not adding more fossil fuels,” William said.

Based on this conclusion, renewable energy is a good solution to reduce dependence on fossil energy. But not without challenges, the UK, which has 16% of wind power plants in its power generation mix, has several important points to note. For example, Gareth Davies, Managing Director of Aquatera explained that wind farms in the UK have a fairly high variability scale.

Responding to this challenge, Gareth conveyed the need to conduct spatial analysis and planning related to areas that have sufficient wind gust potential, also taking into account the historical climate data.

In line with William’s statement regarding the importance of making an immediate energy transition, Dimitri Pescia, Program Manager Southeast Asia of Agora Energiewende explained the fact, for example, in Germany, the investment cost to build renewable energy power plants is much cheaper than to build fossil power plants. In this context, Dimitri explained that investment in renewable energy can be considered as a hedging strategy to minimize the risk of using fossil energy in the energy transition period over the next few years.

From this discussion, the public is being helped to understand the real situation and the lessons that can be drawn for the energy transition process in Indonesia. Fabby Tumiwa, Executive Director of IESR said that Indonesia needs to quickly adopt the use of renewable energy to minimize the risk of an energy crisis due to dependency on fossil energy. Fabby added that the development of these abundant potentials of renewable energy in Indonesia needs to be accompanied by energy efficiency, development of energy storage technology, as well as inter-island interconnectivity.

Closing this discussion, Fabby expresses the urgency for the public to know this issue contextually so that there would be no panic in the community. “Indonesia itself does not need to worry about energy crises that occur in Europe, China, Britain, India, because Indonesia has the advantage of a better energy transition planning towards decarbonization way earlier,” concluded Fabby.