Jakarta, 14 September 2020 – The Ideathon 2020 Energy Transition organized by the Institute for Essential Services Reform (IESR) concluded the first season on Saturday, 12 September 2020, with the 2020 Ideathon Awarding Ceremony attended by Finalists and the Judges which was broadcast live via zoom. The series of Energy Transition Ideathon activities carried the big theme of Indonesia Freedom from the ‘dirty energy’ (fossil fuels). The competition was held from 10 August 2020 to 11 September 2020.

The opportunities and threats of a global energy transition wave need to be properly anticipated and addressed by key stakeholders in the energy and electricity sector with better knowledge and understanding of current trends and their consequences. The role of the Indonesian people, especially the younger generation, plays an important role in supporting and accelerating this energy transition agenda, including in building public opinion on the importance of people’s awareness of the use of Renewable Energy technology and / or clean energy sources at the local level.

This year the Republic of Indonesia is celebrating its 75th day of independence. Independent (free) from colonialism, but not yet free from providing energy sourced from dirty energy (gas, oil, and coal). Meanwhile, at the same time, other countries, including developing countries in Southeast Asia, have responded and participated in the wave of the renewable energy transition to energy systems and low carbon economies. In commemoration of Indonesia’s 75th independence day, the Energy Transition Ideathon 2020 was held, to participate in providing ideas and thoughts for how Indonesia can transition to a low-carbon energy system, free from dirty energy. The delivery of these events, ideas and thoughts is packaged in a competition for innovative creative journalism, photography, and innovative video. With the theme of  ” Indonesia Free from Dirty Energy (fossil), IESR calls on the best works of the nation’s citizens to be able to contribute to voicing the urgency of transitioning from dirty energy.

This competition aims to provide a forum for journalists, photo and video content creator, and the Indonesian people, in general, to be able to voice their opinions and aspirations regarding the importance of the energy transition in Indonesia in the context of the 75th Independence Day of the Republic of Indonesia. Apart from that, the series of activities carried out also served as a momentum to listen to the perspectives and aspirations of the community towards energy supply and access in Indonesia.

IESR as the organizer also strives to provide a creative forum for the public (especially the younger generation) in conveying their perspectives and ideas on the status of global energy transition development and its urgency for Indonesia; get information, views, and input from the general public regarding the challenges of reporting on the topic of energy / clean energy transition as well as; increasing the participation and role of the younger generation in encouraging the discourse of an energy transition in the country so that it can be free from dirty energy, are some of the main things we want to achieve.

The competition closes on August 31, 2020, the organizing committee received more than 100 participants with photos, videos, and creative journalism that were followed by participants from the west to the east of Indonesia. All submitted works are then selected into several participants who are then announced as the Finalists in the Video and Photo Story competition

IESR also invited numbers professional jury who are experts in their respective fields who have experience and qualified technical backgrounds in each category, and the panel of adjudicators are:

The adjudication process begins with an administrative selection, specifically for the Creative Journalism category, competition is intended for the Indonesian press.

Assessment criteria
Broadly speaking, some of the criteria used as references in assessing Photostory work include Thematic, Content, and Technical.

1. Suitability of the theme (Thematic)
Namely, including the extent to which the works are related and in accordance with the themes given by the committee. In this case that is the theme of (clean) energy around us: technology, humanities, and the environment. It is hoped that at least the theme will be reflected in the photo stories sent to participate in the competition.

2. Originality
Originality in this case includes the extent to which the ideas, exploration, and visual approaches are used in the photo story.

“Creating a photo story is like creating a movie, where the audience is presented with a plot from the beginning to the end with a series of narratives that has emotions and messages, not a single photo that stands alone and differs, it’s just a photo. The story only plays on the power of the visuals, there is no motion and there is no audio, ”said Okky Ardya, one of the Adjudicators in front of the finalists at the award ceremony.

Okky Ardya, also appreciated all the works of the finalists who succeeded in presenting a strong narrative according to the theme in this competition.

The suitability of the theme, the depth/completeness of the facts and data, the logic of written, reasoning and grammar are the elements that are assessed in the judging process in this category by the panel of judges

“I salute the participants, the majority of whom are contributed by the local journalists (beyond java island) to participate in and support the campaign for the energy transition process in Indonesia, and in general these participants already understand very well the topic of renewable energy and have answered why we We must immediately transition from fossil energy to renewable energy, ”said Aris Prasetyo, a Senior Journalist from Kompas who is also one of the juries in this category.

1. Theme relevance
The relationship between a big theme and its context for viewers
Choosing a creative perspective on a specific theme and successfully making the story relevant to the audience

2. Ideas
Have a clear message and goal-oriented
The idea is able to answer/describe the challenge – and how to handle it

3. Quality research
Data collection and presentation of ideas based on studies conducted by IESR
The level of understanding of the research and being able to communicate the data to viewers

5. Impact on emotions
Provide an emotional impact on viewers
Being able to create a longer-term impression and able to invite viewers to interact or act

6. Storytelling
The ability to arrange a topic becomes a universal and inclusive problem
Stories and narratives can evoke unexpected elements, so that how a message in the story is finally revealed

The elements above are a big picture of how the jury should look at objectively assessing the overall work in the judging process.

Joining online, Amanda Valani’s innovation video jury added that all finalists managed to convey their works in a narrative, non-patronizing and educational manner, Amanda was also very impressed with the variety of video formats that were collected, ranging from motion graphics, explainers, or vlogs. , right down to the features.

“We are trained to think simply in the context of making creative videos, for example reducing research results (IESR.red) which in my opinion are at the divine level and lowering them to the community level so that people want to change. That is an emotional impact which is an element that very important in making creative videos ”

After going through a long process and being reviewed by the jury, including the public’s choice as the favorite work chosen through the official IESR social media channels, being selected as the winner in the Energy Ideathon 2020 Transition as follows:

The entire organizing committee and members of the jury congratulate all winners and also appreciate all participants for their enthusiasm to participate in the Ideathon Energy Transition – Indonesia Free from the Dirty Energy. We hope that your works can inspire all of us to help Indonesia so that it can soon be Free from Dirty Energy and switch to renewable energy!

Keep creating and see you at the next Energy Ideathon Transition. 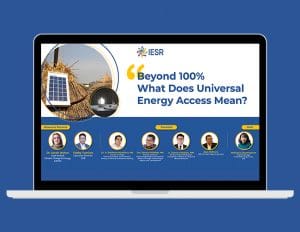