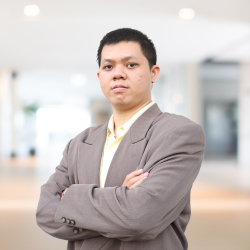 Faris Adnan Padhilah joined IESR in February 2022 as a junior researcher in power systems and distributed energy resources (DERs). Faris was also a researcher during his master’s degree at Seoul National University of Science and Technology (Seoultech) as a research student. As a result of his research, Faris has published several journals and papers. In addition, Faris has worked as a contract employee for a certain time (PKWT) under the Directorate General of Renewable Energy and Energy Conservation (DG EBTKE) of the Ministry of Energy and Mineral Resources (MEMR). During that time, along with his colleagues helped to prepare the Feasibility Study (FS) and Detailed Engineering Design (DED) for the construction of rooftop solar power plants at the outermost posts of the Navy and Army with a total of about 250 posts being observed.

Faris holds a bachelor degree in engineering (S.T.) from the University of Indonesia in Electrical Engineering with a concentration in control engineering and a master’s degree in science (M.S.) from Seoultech. His research interests include renewable energy, microgrid system, power electronics, and control theory.