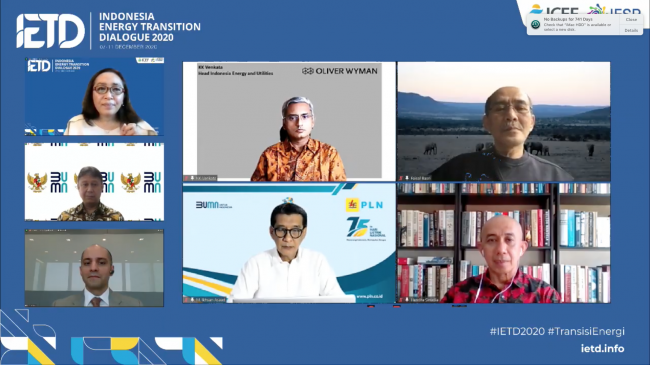 Jakarta, December 9, 2020 – Energy transition is taking place all around the world. According to BloombergNEF, there are 10 million electric buses in the world and they keep increasing. Head of Research for APAC BloombergNEF, Dr Ali Izadi, said that the data is directly proportional to the increasing trend of renewable energy in the future.

The increasing trend of worldwide interest in renewable energy affected coal demand in Indonesia. Executive Director of the Indonesian Coal Mining Association (Asosiasi Pertambangan Batubara Indonesia), Hendra Sinadia, said that currently, the demand for Indonesian coal exports to Southeast Asia and East Asia is still promising. But in 2019, the demand had reached its peak.

“Eighteen percent of our coal exports go to China and India. Another 30% is exported to Taiwan, Thailand and Japan. We will still sign an export cooperation agreement with China to maintain good relations with them. However, in 2019, the demand for coal has reached its climax, there will be a slow decline in the future, there must be a transition to renewable energy,” said Hendra.

Director of the PLN Mega Project, M. Ikhsan Asaad, said that to support the first phase, PLN would not only carry out decarbonization but also digitalization. “Smart grid, smart meter, smart home. Then we also carried out distributed storage. Pertamina, PLN, Antam also collaborated to develop the battery industry in Indonesia,” said Ikhsan.

Deputy Minister of BUMN, Budi Gunadi Sadikin, stated that presently Indonesia has 3500 MW energy surplus of which people use 1000 MW. “From that, 60% is still coal and 15% is natural gas,” said Budi.

On the other hand, Indonesia still exports cheap coal and subsidized LPG consumption by 40 trillion rupiahs. According to Budi, 10 trillion rupiahs from the government budget could have been used to fund renewable energy research and development.

However, in its implementation, Indonesia cannot completely imitate the renewable energy transition strategy undertaken by other countries. “We can’t just do it since our country is an archipelago. Not only we have to think about how the energy can be distributed, but also connected from one island to another,” said Budi.

In this case, Faisal assessed that the government is still not in line with BUMN such as Pertamina. Faisal said that amid the pandemic, the government improved the facilities for fossil-based energy. Especially in the Job Creation Draft Bill (RUU Cipta Lapangan Kerja), many articles rather benefit the price mechanism in the coal industry.

Executive Director of Institute Essential Services Reform (IESR), Fabby Tumiwa, stated that global energy transition has been in progress and inevitable. For energy State-Owned Enterprises in Indonesia, it is important to survive this era of energy transition by transforming business and making innovations.

“In the electricity sector, the government needs to design changes for the structure in electricity industry and set electricity rates that reflect long-term marginal cost,” said Fabby.

PLN needs to integrate a distributed-energy supply system and strengthen its consumers. That way, consumers could become energy producers and help PLN address the need for energy supply investment that—according to the IEA (2020)—requires $25 billion investment per year to accelerate energy transition.

“The challenges for the government is making the energy transition road maps, planning and managing the transition; considering the infrastructure assets of fossil fuel owned by BUMN are very large. There is not much time left—5 years at most to prevent an energy BUMN like PLN from financial losses due to the uncompetitiveness of its PLTU assets with solar generator and storage technology,” said Fabby.