Green Job is a recovery solution for COVID-19 Aftermath 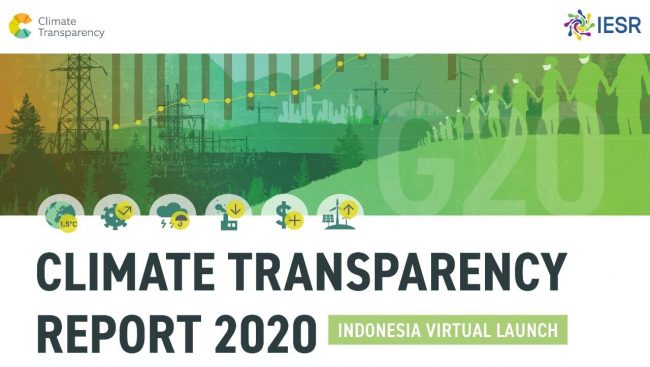 Jakarta, 3 December 2020 – The sturdy economic contraction due to the Covid-19 pandemic has prompted many countries, including the G20, to channel stimulus to protect their economies. Although it is not as big as the support for the fossil energy sector, 17 of G20 member countries (apart from Mexico, Russia, and Saudi Arabia) provide some support for the green industry, with a primary focus on increasing the capacity of renewable energy and low emission transportation.

Green recovery is also a recommendation in the Climate Transparency Report 2020 to sustain the CO2 emission reduction.

The Climate Transparency Report (previously known as Brown to Green Report) is the world’s most comprehensive annual review of G20 countries’ climate action and their transition to a net-zero emissions economy. Climate Transparency is a global partnership of 14 think tanks and NGOs that brings together experts from the majority of G20 countries supported by the Federal Ministry of Environment, Nature Conservation and Nuclear Security, the German Embassy to Indonesia, or the German BMU.

“The time to act is now to transform into a low-carbon economy. Indonesia has the opportunity to align its economic response with a long-term decarbonization strategy, ” said Fabby Tumiwa, Executive Director of the Institute for Essential Services Reform (IESR), at the launch of the 2020 Climate Transparency Report.

According to Fabby, rather than supporting the fossil fuel industry, an economic stimulus package, if properly directed, could provide funds to initiate an energy transition.

“Green recovery provides good opportunities globally to generate jobs that are compatible with green initiatives, for example, on solar power compared to fossil energy. The younger generation must start to consider and take opportunities in environmentally friendly jobs (green jobs),” he explained.

Andhyta Firselly Utami, Environmental Economist and co-founder of the Think Policy Society, on the same occasion, said that natural resources management tends to create more jobs. Andhyta, or who is familiarly called Afu, explains the concept of green jobs according to the ILO definition.

“Green job means producing outcomes that help reduce emissions, improve process efficiency in general, and are low in emissions and decent works in terms of working hours and working environmental conditions,” she explained.

Agreeing with Afu, Gita Syahrani, Head of the Secretariat of Lingkar Temu Kabupaten Lestari, said that whatever the profession, it can contribute to the green recovery.

“Synergize the existing professions to meet climate change targets. For instance, as a building expert, you can make energy-efficient buildings,” she explained.

Seeing the world trend that is starting to open up great opportunities for green jobs, Gita expressed the need to increase the capacity of local human resources.

“Without competitive local human resources, our dream (in participating in green work) will be challenging to come true. We need research and development that is strong enough to manage natural resources,” Gita explained.

She gave an example, as the district community’s efforts are to protect mangrove areas from burning by planting pineapples, they have to be equipped with the ability to manage their pineapples.

“For example, face masks from pineapple processing products will be much more expensive,” he explained.

In terms of creating green jobs, according to Sean Nino L, founder & CEO of Eco-Mantra, Indonesia has great potential.

“Indonesia has many islands with sunlight to generate electricity through solar power,” he said.

He also shared his experience in developing solar power plans in hotels in Bali. He managed to keep energy by half, thus saving operational costs.

According to him, the biggest challenge in developing green jobs is that policies change frequently.

Another difficulty addressed by Gita is the division of authority between the central government and the regions.

“It is difficult if there is no national legal protection even though the region is already enthusiastic. We recommend using a juridical approach so that national policies can be translated more specifically in the regions and more contextually,” she explained.

Furthermore, according to Gita, the government often prepares development and spatial planning plans but neglects to formulate investment plans. It is essential to synchronize with the low carbon development vision.

Director of Manpower, National Development Planning Agency (Bappenas), Mahatmi Parwitasari Saronto, said the other challenge in realizing green recovery is the preparation of human resources for the implementation of green jobs.

“The current trend for green jobs has numerous potential. We cannot deny it, because other countries have run for green jobs. We are already left behind, “said Mahatmi, who is familiarly called Ami.

The problem is that currently, her party does not have a green work framework, such as how much demand is needed to encourage a green economy in Indonesia.

“Bappenas is ready and guided by the low carbon development policies adopted by the government. Today, the green economy is included in the government’s vocational policy strategy that we are currently drafting, “she concluded. (US/Gb)

Jakarta, 9 September, 2021-In the past year, there was a dynamic change in the energy sector. The approaching deadline of the Paris Agreement and the

Jakarta, August 26, 2021 – The coal industry in Indonesia has a high enough risk to become one of the stranded assets in the future,

The Director of Electricity, Telecommunications and Information at the Ministry of National Development Planning said that the optimal zero emission scenario option would be achieved