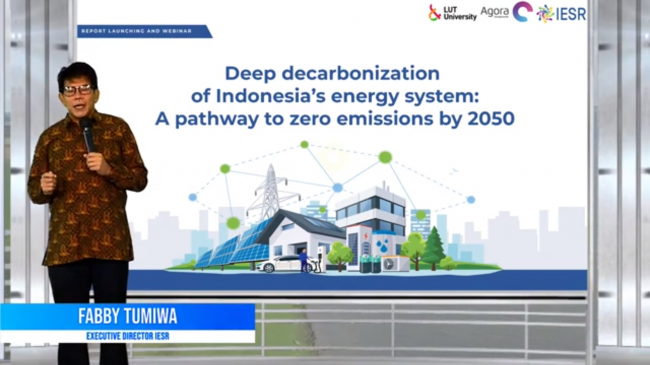 Jakarta, 28 May 2021 – The Institute for Essential Services Reform (IESR), a think-tank that focuses on renewable energy and environmental issues, launched its latest study entitled, “Deep Decarbonization of Indonesia’s Energy System: a Pathway to Zero-Emission by 2050”. This study is a collaboration between IESR, Germany’s Agora Energiewende, and Finland’s Lappeenranta University of Technology (LUT).

In his remarks, Fabby Tumiwa, Executive Director of IESR, emphasized that this decade is a decisive decade to achieve zero emissions by 2050.

“This report shows that Indonesia is technically possible and economically viable to achieve zero emissions in its energy system by 2050. Thus, Indonesia should be able to meet the Paris target of limiting global temperature rise to below 1.5 degrees and achieving carbon neutrality by 2050. This study is quite different from government modeling which states that Indonesia will only reach carbon neutral in 2070,” said Fabby. This difference in results can be caused by various factors, one of which is the different modeling methods. However, Fabby emphasized that this difference should foster discussion.

“This report is the first comprehensive report that looks at the energy system in Indonesia, covering electricity generation, transportation, and industry,” added Fabby.

Philip Godron, Senior Associate Global Energy Transition emphasized that the trend is obvious, transition to renewable energy is currently happening. The sooner we act, the more space for innovation will open up and also increase global competitiveness. 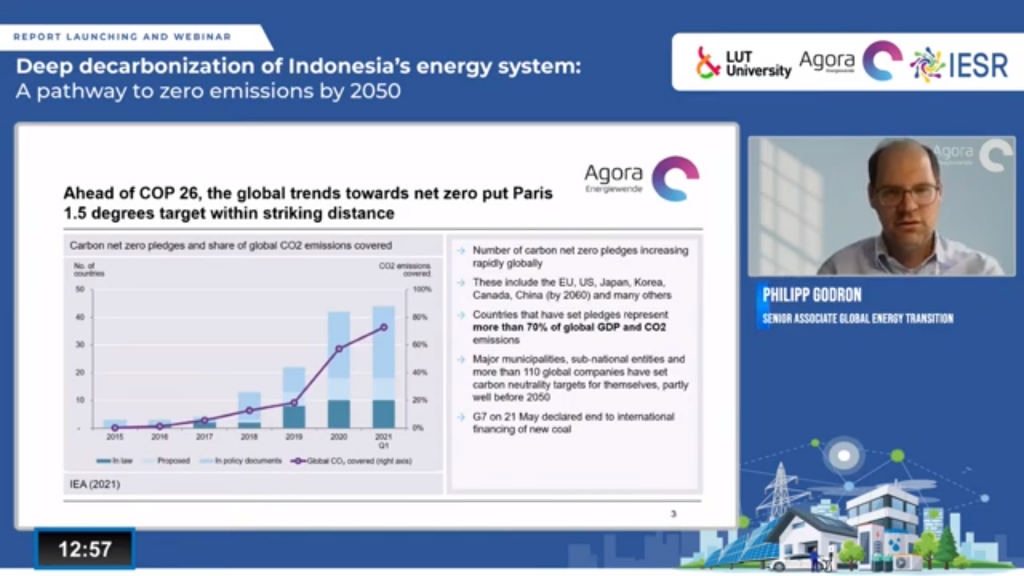 “For example, the European Union will strictly enforce the carbon footprint standards for goods that can be sold there. So setting a target to become zero emissions will be very useful not only for fulfilling international commitments and dealing with the climate crisis but also maintaining and even increasing competitiveness in the international arena,” said Philip.

The results of this modeling are in line with the latest report by the IEA (International Energy Agency) which states that solar and wind power will dominate the energy mix by 2050, because of the cost of generating renewable energy in Indonesia, especially from solar energy, will be cheaper.

In the long term, there are several advantages of achieving zero emissions in the energy system by 2050, among others, system costs and Levelized Cost of Electricity (LCOE) which are cheaper than if Indonesia continues to do business as usual. This means that people will have cheaper electricity prices. Pamela Simamora, the lead author of this report, added that other benefits of Indonesia achieving zero emissions by 2050, such as millions of jobs that will grow. “There will be 3.2 million new jobs. This figure is still higher than the number of jobs at risk of being lost, which is 1.3 million. So actually we are still gaining, not losing when we become zero emissions in 2050,” said Pamela.

There are four main pillars in Indonesia’s decarbonization process. First, the promotion of renewable energy that relies on solar energy and the integration of the electricity grid for the export and import of inter-island electric power. Second, electrification in the transportation and industrial sectors. Third, reducing the use of fossil energy, especially coal-fired power plants, because will not be economically competitive in the next 10-15 years. Fourth, the development and utilization of clean fuels can be in the form of hydrogen, synthetic fuels, or biofuels for the decarbonization of transportation and industrial systems.

“Solar PV will be the backbone of our energy system, supported by storage systems (batteries), electrification, and clean fuel which are the keys in each sector,” concluded Pamela closing her presentation.

Darmawan Prasodjo, Vice President Director of PLN, welcomed this report positively but did not deny the fact that PLN could not undertake all efforts to decarbonize the electricity sector on its own.

“We appreciate this comprehensive report, and as already explained that Indonesia is capable of decarbonizing and achieving zero emissions by 2050. PLN supports this initiative and we are currently developing a model that includes technical and policy calculations. What is certain is that PLN supports this initiative, the RUPTL that will be issued is the green RUPTL,” he said.

“There are at least 3 benefits that can be felt by the community from decarbonization, i.e fighting climate change, supporting the use of renewable energy, and ensuring industrial competitiveness. I think everything (decarbonization efforts-ed) is doable and realistic to implement. Actually, the sooner we reach zero-emission, the greater our chances of escaping the middle-income trap,” he said.

On the other hand, Luh Nyoman Puspa Dewi, director of Energy Conservation at the Ministry of Energy and Mineral Resources, stated that the awareness to go towards zero-emission already exists, but according to her, the current condition of Indonesia is still rather difficult if we have to make drastic changes.

“We are aware that we have to start thinking towards net-zero, this has already been done, but we have to be realistic by looking at the conditions in Indonesia,” she said in response to the report.

It is obvious that to decarbonize and achieve zero-emission by 2050, it takes confidence from policymakers, strong political leadership, and concrete actions from the government. Political commitments must be embodied in, including by setting more ambitious NDC targets and issuing policies that support the creation of an enabling ecosystem for renewable energy, to attract more investors. This is important, considering that the efforts to decarbonize the energy system in Indonesia require an investment of around USD 20-25 billion/year in the period 2021-2030 and USD 60 billion/year for the period 2030-2040.

IESR is soliciting individual/organization/Production house in Indonesia to submit a proposal to produce a video campaign project, please refer to the document below to see

Selengkapnya >
Women in Energy: Ensuring the Presence of Gender Equity and Equality in Energy Sector
26 July 2021 No Comments

Energy is a basic need for everyone, including women. So it is appropriate to consider the allocation and supply of energy that meets the needs

Please refer to the document below: