If Government Ignores to Issue Policy for a Just Energy Transition, It Will Cause Series of Social Economy Problems for Coal Producer District 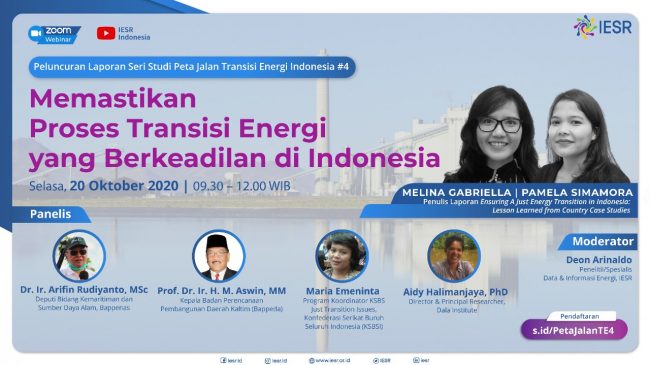 Attending the online report launching was the IESR’s executive director, Fabby Tumiwa. The Head of Regional Planning Agencies of East Kalimantan H.M. Aswin, Aidy Halimanjaya, of the Dala Institute for Environment and Society, and Maria Emeninta of the Confederation of Indonesian Prosperous Trade Unions (KSBSI) presented as responders.

In his opening speech, Fabby Tumiwa explained that the energy transition issue is relevant to Indonesia, considering its position as a coal producer. Energy transition will impact the coal industry. As we might be aware that coal has become an export commodity, and it contributes significantly to national and regional income. Moreover, as the cost of renewable energy technology is getting competitive, coal-based power plants will no longer be economical to be continuously operated for the future decade. It will cause lower coal consumption domestically. Currently, power plants use 90% of national coal consumption.

The commitment to leave fossil-based energy from the countries that used to be the customer of Indonesia’s coal will transform the future of the Indonesian coal industry. Lower coal demand will directly affect the Gross Regional Domestic Product (GRDP), the balance of trade, jobs, and business opportunity. Therefore, the just energy transition approach is needed to ensure impacted labor and community are carefully considered, and no one is left behind.

The four countries have experienced struggles in the energy transition. Ruhr, the biggest coal producer in German, takes 60 years to do energy transition. Germany’s first step was granting a significant amount of subsidy to secure the coal industry, which at that time was experiencing lower demand due to price liberalization.

“Its step increased the transition cost, and made economic diversification longer than it should,” added Pamela Simamora.

In Indonesia, the energy transition process seems to attract less attention to the Government. Energy transition may bring negative side effects such as the lowering of GRDP in coal producer areas, the deficit in the balance of trade, an increased number of unemployed who lost their job in the coal industry. However, if the implementation of the just energy transition process is successful there will be a series of benefits and opportunities for Indonesia such as lower cost of the electrical system, economic diversification, the birth of green jobs, better air, soil, and water quality, and lower public health costs.

According to the lesson learned of the four countries, IESR urges government to prepare strategy and policy to ensure the process of just energy transition, with the following consideration; implementation of good governance in planning energy transition pathways, enabling condition for investments in renewable energy, public consultancy, and dialogue, establishing policies related to social protection and skill development, economic diversification, and establishing funding mechanism to support just energy transition.

Responding to the IESR Study report, M. Aswin admitted that since 2007 coal has become the most prominent contributor for East Kalimantan GRDP. Yet, he explained that the local government plans to transform into a sustainable economy by lowering the contribution of the oil and gas sector from 45.49% to only 17% in 2050.

“We plan for no longer exporting raw coal. If we want to export (coal), it should be down streamed. Unfortunately, the provincial government has limited authorization regarding this matter. The authority is mostly handled by the central government. We only arrange the plan, but they (central government) determine it.”

Aidy Halimanjaya assumes that the lack of discussion about the direction of policies on the use of resources in the regions happens due to weak political communication at the national level and the knowledge gap of each government institution.

“Generally, government institutions do not see policy to its impact. It stops at the output level. We know that output level doesn’t need much coordination,” Aidy said.

IESR realizes that even though energy transition is a global issue and phenomenon, it is still considered new in Indonesia. However, IESR believes that Indonesia’s energy transition planning is important concerning reaching the target to lower the earth’s temperature as it is agreed in the Paris Agreement.

Thus, the launching of the Energy Transition Roadmap Study became one of the ways to urge policymakers to understand this issue and seriously discuss it. Later on, it is needed to unify the understanding of the policymakers and other parties so that we can draw tangible urgency and concrete action plans to deal with the impact of the energy transition.