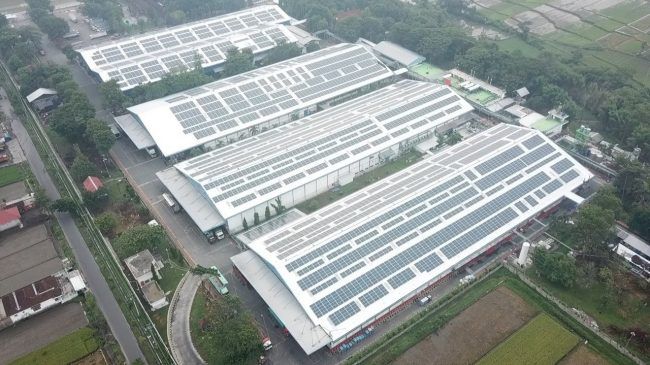 Klaten, 6 October 2020 – A year since the declaration of Central Java Solar Province (the pioneer province in Indonesia utilizing solar energy in their energy mix) on 17 September 2019 by the Ministry of Energy and Mineral Resources (MEMR) of Central Java Province, in collaboration with the Institute of Essential Services Reform (IESR) and supported by the Indonesian Solar Energy Association (AESI), the development of the use of rooftop Solar Power Plants in Central Java is increasing.

Central Java Province itself has the potential for solar energy radiation of 4.05 kWh/kWp per day, slightly above Indonesia’s average (3.75 kWh / kWp). The installation of rooftops solar can help the Central Java Provincial Government achieve the renewable energy mix target in the 2020 Regional Energy Plan (RUED) of 11.60%.

The initiation of Central Java Solar Province is in line with PT Tirta Investama (Danone-AQUA) efforts to use renewable energy electricity. On October 6, 2020, Danone AQUA inaugurated its Solar Roof installation of 2.9 MWp at its factory in Klaten. The Solar Roof installed at the AQUA factory in Klaten consists of 8,340 modules solar panels in four roof buildings covering an area of ​​16,550m2. This power plant can generate energy for 2500 housing units with an installed power of 900 VA.

As part of RE100, the Danone group is globally committed to using 100% renewable energy for its operations by 2030. The roof-top PV installation is part of meeting this target. With the inauguration in Klaten, until 2020, Danone-AQUA has operated 5.67 MWp PLTS in its four factories.

To install PLTS Roof, PT Tirta Investama is collaborating with Total Solar. Total Solar itself was originally an oil and gas company from France. The company is starting to switch to diversification to develop renewable energy. Total Solar has installed PLTS in three AQUA factories in the Java region.

He also highlighted the involvement of Total Solar as a multinational company initially involved in the oil and gas sector, which is currently switching to the renewable energy sector.

“The investment in Rooftop solar by Danone-AQUA is an interesting phenomenon because it brings together two multinational companies that work together to encourage the global energy transition to ensure that global temperature increases do not exceed 2 degrees,” he explained.

According to Fabby, the energy transition is necessary to see that many industrial players have set targets to use clean electricity through the use of renewable energy technology.

Fabby also reiterates if PT Tirta Investama’s investment shows that solar technology has now become more affordable, and the price of electricity is competitive. Following the fact that the cost of modules has fallen 90 percent in the last decade, the price of electricity from solar PV is getting cheaper and can match fossil plants such as PLTU. The widespread use of Rooftop solar also shows that intermittent renewable energy is not an insurmountable obstacle. This debunked the myth that has been circulating so far that PLTS is not reliable and expensive.

Questioning the government’s target for a 23 percent renewable energy mix by 2025, Harris Yahya, Director of EBTKE, Ministry of Energy and Mineral Resources, explained that there is still a large gap between targets and planning must be addressed immediately.

“Currently, our projection is still at 15 percent from 23 percent,” he said.

Harris explained that the government had taken several actions to meet the target of the 8 percent difference.

“The government has issued a Ministerial Regulation (Permen) number 49 of 2018, which has undergone improvements to Permen number 13 of 2019 and number 16 of 2019. This effort is to make Rooftop solar more attractive in the home industry and in all commercial buildings. , “He added.

“There are solar-powered lights for street lighting that broken because they are not maintained, or the battery is missing. Maintenance funds from the central government are not available, but local governments can do something like this. Therefore, it is necessary to have an umbrella of cooperation between government agencies, training to maintain it and the great involvement of various parties so that the technology can be used sustainably, “he said.

Ganjar believes that Indonesia can move forward in the Rooftop solar sector because of the availability of the basic material for making solar cells. Therefore, Indonesia needs to build a solar cell industry and other supporters.

“In collaboration with universities in Indonesia, we can certainly make battery technology (Rooftop solar) so that it can be mass-produced for households,” concluded Ganjar (US, FT).

Kompas | Anticipating the Effects of the Energy Transition on the International Trade Sector
December 1, 2020 No Comments

Aris Prasetyo | Kompas.id JAKARTA, KOMPAS – The world is moving away from fossil energy towards clean and sustainable energy sources. Indonesia must be ready

Selengkapnya >
Kompas | Optimizing the Use of Renewable Energy is More Effective than the Household Level
December 1, 2020 No Comments

Erika Kurnia | Kompas.id JAKARTA, KOMPAS – The use of environmentally friendly renewable energy as a form of energy conservation is urgent to reduce the

Jakarta, Petrominer – Indonesia Energy Transition Dialogue (IETD) is back to facilitate discussions on energy transition in Indonesia. Entering its third year, this time, the

Verda Nano Setiawan | Katadata.co.id The government has appointed the Indonesian Institute of Science, aka LIPI, as the research coordinator for the development of national