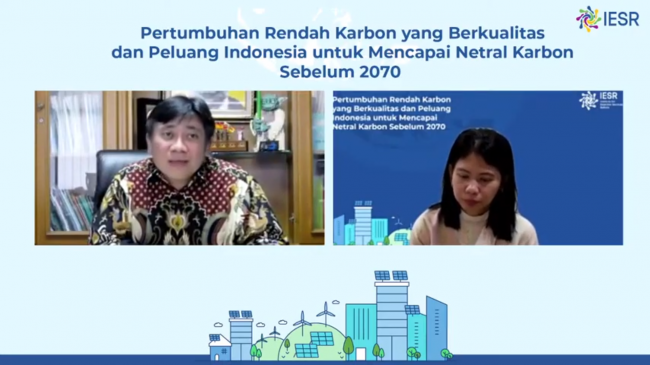 Jakarta, 28 April 2021 — President Joko Widodo’s speech during the Leader Summit on Climate Change which stated that he would seriously tackle the issue of the climate crisis was considered less ambitious by a number of parties. This is because President Jokowi’s statement emphasizes the FOLU sector (Forestry and Land use Conversion), while the energy sector, which will be the largest contributor to emissions in the future, was not even mentioned at all. Meanwhile, on the same occasion, a number of country leaders expressed their commitment to reduce emissions and their target to be carbon neutral. Indonesia through the Ministry of Environment and Forestry has released a 2050 Long-term Strategy on Low Carbon and Climate Resilience (LTS-LCCR) which targets that Indonesia will become carbon neutral by 2070. Institute for Essential Services Reform (IESR) ) views this target as less ambitious and shows the government’s half-hearted efforts in dealing with the climate crisis.

Responding to this, IESR continues the discussion series #Before2070 to see Indonesia’s opportunities to achieve carbon neutrality by 2070. This webinar is the second part of a series of #Before2070 webinars aimed to encourage the government to make more ambitious climate policy targets. Indonesia’s target to become carbon neutral by 2070 is considered inconsistent with the Paris Agreement commitment that was signed by Indonesia in 2015 and ratified by Law no. 16 of 2016.

Preparing a Long-Term Strategy towards being carbon neutral by 2050 is the obligation of each country that signs the Paris Agreement. However, the LTS-LCCR 2050 document that is owned by the government has become a debate and has caused controversy even among the government itself. This can be seen from the inconsistency of documents and explanations between government agencies regarding Indonesia’s carbon-neutral targets.

For example, the Ministry of Bappenas previously explained about Low Carbon Development in Indonesia (LCDI) which offered several scenarios if Indonesia became carbon neutral in 2045, 2050, 2060, or 2070 and its implication to Indonesian economic growth.

“Climate commitments must be integrated with national development programs. Indonesia’s commitment to achieve net zero-emission has been stated in the RPJMN, ”explained Medrilzam, Director of Environment at Bappenas. He also emphasized that there should be no trade-off between economic growth and efforts to reduce emissions. According to him, achieving carbon-neutral requires a lot of funds. Therefore, apart from cooperation and multi-stakeholder commitment, Indonesia needs to receive strong support from international countries.

From the energy sector, Agus Cahyono Adi, Head of the Center for Data and Information at the Ministry of Energy and Mineral Resources, said that his party is preparing to support Indonesia in achieving net-zero emission to meet energy needs with various efforts.

“The energy sector is an important sector in the net-zero emission plan because we are one of the emission contributors. In addition to reducing emissions, we are also trying to increase energy demand. Increasing renewable energy and the use of clean fuels play an important role in increasing energy demand, “said Agus.

However, his party has not dared to announce a target figure or deadline to become carbon neutral from the energy sector.

“For each choice that we will take, we need to consider the aspects of availability, accessibility and affordability,” he explained.

To achieve carbon neutrality, more innovative efforts are needed, especially through developing an investment climate such as carbon trading. Kus Prisetiahadi, Assistant Deputy for Climate Change and Disaster Management, Coordinating Ministry for Maritime Affairs and Investment (Kemenko Marves) explained that currently the Presidential Decree for the value of the carbon economy is a guideline for GHG emission reduction and low-carbon national development is still being drafted. There are at least 8 regulatory components in this Presidential Decree and the marine sector is one of the sectors that will be developed for efforts towards mitigation.

Dian Afriyanie, Lokahita senior researcher, highlighted the lack of integration across sectors and scales in policymaking. This results in policy products that often feel out of sync between one ministry/agency and another ministry/institution.

Furthermore, Eka Melissa, Senior Advisor of The Partnership for Governance Reform, emphasized that low-carbon development should be seen as an opportunity to develop the country, be environmentally friendly while meeting the targets of international agreements.

“I see that Bappenas has seen it (as an opportunity) but other ministries seem to still see it as a proven challenge from the various documents produced. Low carbon development is still seen as an obstacle and a challenge,” she said.

The role of local government is considered very important in achieving carbon-neutral development. Andy Simarmata, Chair of the Indonesian Planning Experts Association (IAP) gave a view that the government and other relevant stakeholders can campaign for carbon neutrality down to the regional level so that it can be translated into the RPJMD (regional medium-term development planning). Incentives for the business world, especially the pattern of business behavior, also need to be provided in addition to encouraging the technology.

For climate commitments, especially targets to be carbon neutral, each related party needs to see the current climate situation as a crisis that requires a quick and precise coping strategy. The more we postpone dealing with the climate crisis, the greater the costs and the heavier the efforts that must be made in the future.