Indonesia – Germany Collaborate to Accelerate the Energy Transition in the Electricity Power Sector through the Clean, Affordable, and Secure Energy for Southeast Asia (CASE) Program 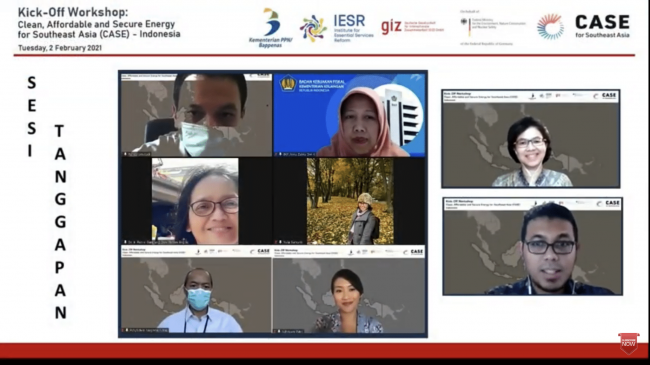 The Kick off workshop of the Clean, Affordable, and Secure Energy for Southeast Asia (CASE) program (2/2/2021) signifies the collaboration between the Indonesian and German governments to support the energy transition, especially in the electricity sector in Indonesia and also the Southeast Asia region.

Norbert Gorrißen, Deputy Director-General of the German Federal Ministry for the Environment, Nature, Conservation and Nuclear Safety (BMU), said in his opening remarks that climate change is currently the concern of many major countries in the world. He pointed out regarding Japan, China, Philippines that have taken a commitment to fulfill the Paris Agreement to maintain the earth’s temperature below 2°C by reducing the use of coal in its energy sector. He pointed out that Indonesia, as one of the most influential countries in Southeast Asia and the G20, should also do the same.

“The energy situation in Indonesia is indeed very complex, but there is no other way than to do an energy transition. The CASE project is a big project between Germany and Indonesia. Through it, we are ready to share experiences related to the energy transition that Germany has undertaken. Currently, in Germany, more than 50 percent of electricity comes from renewable energy, ”he explained.

Lisa Tinschert, Program Manager for CASE Indonesia for GIZ Indonesia, stated that one of CASE’s most prominent challenges to overcome to achieve its goal is a low capability and political will or the limited and decent or sufficient information about the energy transition.

“The next challenge is policies, regulations, and plans that are not always consistent and do not prioritize the development of decentralized renewable energy, as well as business ecosystems and access to funding that are not very supportive of the energy transition,” explained Lisa.

Fabby Tumiwa, Project Lead CASE Indonesia from the Institute for Essential Services Reform (IESR), explained that the energy transition is not only by developing and increasing the number of renewable energy power plants but also stopping the construction of (new) coal-fired power plants after 2025, and phasing out the older coal-fired power plants than 20 years as soon as possible.

“Although growing modestly, there will be an increase in renewable energy development in 2020, generally coming from hydro and solar power as much as 28.8 MW. The total capacity of renewable energy generators installed until 2020 is around 10.5 GW, “he added.

According to Fabby, our homework in the energy transition is energy efficiency. Several programs to support energy efficiency in Indonesia need to be monitored, such as reducing energy consumption in the transportation sector, updating and introducing Minimum Energy Performance Standards (MEPS), and requiring the inclusion of Energy Saving Labels for electrical appliances, as well as utilizing the potential of green buildings. Quoting the latest IESR report, Indonesia Energy Transition Outlook 2021, Fabby stated that the lack of funds and the lack of monitoring made the extensive potential in green building energy wasted.

Answering the mandate of the renewable energy mix with a target of 23 percent by 2025, PLN’s EVP Electricity System Planning Edwin Nugraha Putra said that PLN committed to achieving it. One of its efforts is by intensifying co-firing at coal-fired power plants. However, he realized that the biggest challenge for co-firing is the availability of feedstocks, up to 16 million tons of biomass/year.

“The finance ministry is committed to an energy transition. CASE will be a partner in providing fiscal policy input that supports renewable energy investment to accelerate this energy transition. Currently, the government is doing its job to supply affordable electricity by providing subsidies for fossil energy. However, on the other hand, the government also has other obligations to develop clean energy. Even though the state budget (APBN) is still very limited, “she said.

Zulvia hopes that Bappenas as the political partner of the CASE program can play its role as a locomotive to see various aspects of the energy transition such as the fitness of PLN condition, the state budget, and the economy of renewable energy into one integral part.

Representing Bappenas, Director of Electricity, Telecommunications and Informatics, Rachmat Mardiana, hopes that working together on the CASE program can help provide solutions to problems in the electricity sector in Indonesia, starting from the primary energy side such as dependence on fossil energy, transformation in the electricity system, including not yet integrated and synergistic, as well as obstacles at end-users, such as unequal access to electricity.

The programme “Clean, Affordable and Secure Energy for Southeast Asia” (CASE) aims to drive change in the power sector in SEA towards increased ambitions with regards to climate change. It focuses on the four main SEA countries including Indonesia in terms of energy demand and also foresees regional activities.

Anchored in Indonesia with the political partner “Ministry of National Development Planning”, with support of a country implementation team and international partners, CASE will propose evidence-based solutions to the challenges met by decision-makers in the design and implementation of the energy system of the future and build societal support around those solutions. A joint fact-finding approach will be applied, involving expert analysis and dialogue to work towards consensus by narrowing areas of disagreement.

CASE will also support dialogue and coordination in the Indonesian power sector, provides technical and policy support, and facilitate dialogue around a new energy vision. Through these activities, CASE will directly contribute to the transition of the power sector towards an innovative, economically successful, and environmentally friendly model for SEA. CASE functions as an aligned programme to the SEA Energy Transition Partnership (SEA ETP).

Bali can lead as the clean energy province, the island owned enormous potential for technical and market of solar PV
15 June 2021 No Comments

Jakarta, 28 May 2021 – The Institute for Essential Services Reform (IESR), a think-tank that focuses on renewable energy and environmental issues, launched its latest

“Solar cells will be the new promising commodity in the future, just like oil now,” said Fabby Tumiwa during his explanation in the REinvest Indonesia