Indonesia Needs not only Energy Transition, but The Accelerated One 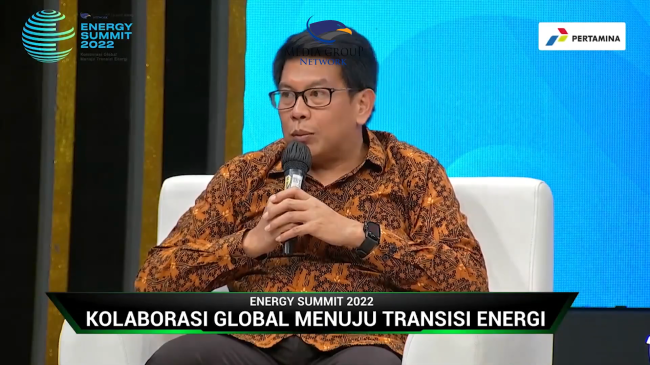 Jakarta, May 31, 2022 – The geopolitical conflicts that have occurred in the last few months have affected a number of global situations, one of which is the condition of energy supply. European Union countries that feel the impact of the disruption in energy supply have begun to look for various alternatives, both in the short and long term. As a long-term solution, the European Union issued a new energy policy entitled “REpower EU”. Under this policy, the European Union plans to increase its renewable energy capacity to 740 GWdc by 2030 to reduce their dependence on Russia’s fossil energy and ensure its energy security.

Fabby Tumiwa, Executive Director of IESR, at the MGN Media Summit on Tuesday, May 31, 2022, stated that the current global geopolitical situation is indeed not favorable for the energy transition not only in Indonesia but in various countries in the world. However, after several months of ongoing geopolitical tensions, a number of countries have begun to use this momentum to break away from dependence on fossil energy and accelerate their renewable energy. Indonesia should also be able to do the same thing for instance by ensuring that the regulations made to support the acceleration of renewable energy such as the Minister of Energy and Mineral Resources Decree number 26/2021 are implemented.

“The weakness of this country is that the plan has been made but its implementation and enforcement is still weak, for example the Minister of Energy and Mineral Resources Regulation 26/2021 regarding rooftop PV,” Fabby explained.

Fabby explained that the MEMR Ministerial Regulation number 26/2021 had not yet been implemented by PLN because several issues were still hampered, one of which was the Ministry of Finance’s compensation for PLN, whose regulations had not yet been made.

“Then maybe the DPR RI can summon the Minister of Finance and the Minister of Energy and Mineral Resources to explain the situation and ask them to immediately design a compensation scheme for PLN,” he added.

The energy transition situation in Indonesia itself is not very encouraging. Having a renewables mix target of 23% in 2025, data from the Ministry of Energy and Mineral Resources in February 2022 shows that the target has only been achieved around 11.5%. Sugeng Suparwoto, Chairman of Commission VII DPR RI which handles energy, admitted that it was difficult to pursue the renewable energy mix target, but that did not mean it was impossible.

“I have to admit this is hard, but with our extra hard work together, I am still optimistic that we can achieve it,” explained Sugeng.

PLN as a key actor, especially in accelerating renewable energy, stated that apart from providing energy, the demand side for energy must also be ensured.

“We also need to ensure that the demand for renewable energy is available. PLN itself will rely heavily on existing technology to pursue net-zero emission (NZE) and energy mix targets,” Cita Dewi, EVP Planning & Engineering for EBT at PT PLN (Persero), explained.

Cita added that his party cannot work alone to execute the acceleration of renewable energy on its own. It takes collaboration of various parties to ensure this energy transition runs.

Daniel Purba, Senior Vice President, Strategy & Investment, PT Pertamina (Persero) stated that our fossil reserves are not as large as they used to be. In terms of consumption, even though at this time fossils still dominate, in the future it will definitely change.

“Even though now, for example, fuel dominates people’s consumption, in the future electric vehicles and alternative fuels such as hydrogen will be widely used,” he said.

With this phenomenon, corporations have a need to diversify and even transform their business so that the company can be sustainable, and gain the trust of both investors and consumers.

“Pertamina itself has started to diversify its business by starting to develop hydrogen and using solar power in our operational offices,” added Daniel.

Highlighting energy policy in Indonesia, Djoko Siswanto, Secretary General of the National Energy Council, stated that Indonesia has quite complete policy instruments, starting from road maps, targets, and plans. However, according to him, it is important to measure whether we are on the right path of the various policy instruments that exist in Indonesia and if Indonesia energy security is resilient.

“Various policy schemes that currently exist put our energy security index in the ‘resistant’ category. We haven’t been able to reach the ‘very resilient’ category because of several things, including our energy (oil) imports are still high, our energy infrastructure (grid) still needs to be improved, and our NRE mix is ​​still low,” Djoko explained.

Djoko added that the government needs to resolve these issues to ensure Indonesia’s energy security and to reduce GHG emissions from the energy sector. In this way, Indonesia’s commitments to various international agreements are fulfilled.