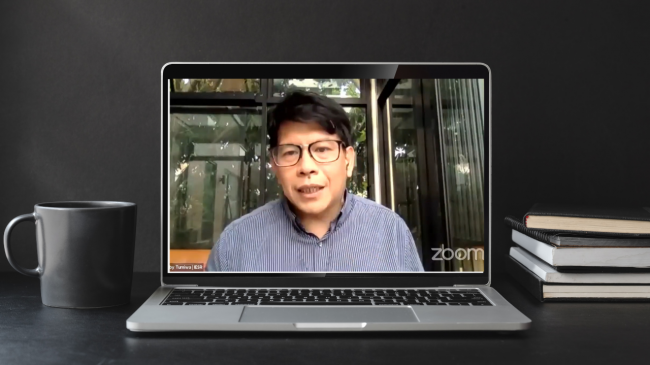 Stakeholders in Indonesia have realized that climate change is an important aspect of development planning in Indonesia. In addition to economic growth through the development of key sectors according to the principles of sustainable development, the aspect of emission reduction also requires special attention in order to quickly achieve net zero emissions. On this basis, the Institute for Essential Services Reform (IESR) in collaboration with the Indonesian Foreign Policy Community (FPCI) held a presentation and discussion regarding the roadmap to Indonesia’s net zero emissions by 2050.

On this occasion, IESR’s Research Coordinator, Pamela Simamora, stated that in formulating a strategy to achieve emission reductions, it is by remembering the 2015 Paris Agreement on climate change. Regarding the agreement and the global target, Pamela said that the government needs to refer back to Indonesia’s commitment (through Undang-Undang No. 16/2016, concerning the Ratification of the Paris Agreement) to reduce emissions by 29% with its own efforts or 41% with international assistance by 2030.

However, along the way, according to a report issued by the Climate Action Tracker in 2020, Indonesia’s Nationally Determined Contribution (NDC) document that year was not in line with the targets agreed in the Paris Agreement. In addition, Indonesia’s Long-Term Strategy on Low Carbon and Climate Resilience (LTS-LCCR) document also does not show zero emissions as a target that must be achieved by 2050. Pamela said the government’s planning through the low-carbon development planning documents earlier was not in line with the downward trend in electricity prices with renewable energy sources (which are expected to contribute substantially to emission reductions).

The IESR study entitled “Deep Decarbonization on Indonesia’s Energy System: A Pathway to Zero Emission by 2050” shows that the energy sector (power generation, transportation and industry) can achieve zero emissions by 2050 because it has achieved the technical and economical feasibility. The roadmap has 4 main pillars; renewable energy, electrification, reduction of fossil fuels, and clean fuels. The study states that a drastic increase in the use of renewable energy, electric vehicles, and electric heating is necessary to be implemented within this decade. 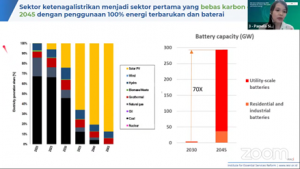 This study also states the need for the implementation of a coal moratorium to reach the peak of carbon from coal by 2025. This study also projects that the electricity sector will become the first sector to be carbon-free by 2045 by utilizing renewable energy sources and battery technology. On this basis, Pamela said that the Government of Indonesia could further increase its emission reduction target.

Responding to the explanation, Satya Widya Yudha from the National Energy Council (DEN) said that beside the Paris Agreement, Indonesia also has a target and vision of Indonesia Emas in 2045 which targets 6% economic growth. With this target, Indonesia has a strategy to develop and grow the manufacturing and service industries, which of course will follow the rules of green growth. Based on this, Satya said that energy consumption will also increase, so that the peak of national emissions is still difficult to achieve even in 2040-2050.

In addition to the aspect of industrial growth, Satya also responded to IESR’s input regarding the moratorium on coal that needs to be terminated as soon as possible. Satya explained that there is a legal risk and financial impact that harms Indonesia if the use of coal is immediately stopped, this is feared to be a premature policy and it is felt that there is still much need to be studied about its implementation strategy.

The same thing was conveyed by Chrisnawan Anditya, Director of the Directorate of Various New Energy, DGNREEC, Ministry of Energy and Mineral Resources. Chrisnawan stated that there is a need for a study related to the calculation of Indonesia’s peak emission that covers all related industries. This is considered to be very important as the basis for planning the development of net zero emissions in Indonesia. Chrisnawan also said that the use of new technologies such as batteries and pumped storage needs to be targeted by the Ministry of Energy and Mineral Resources to be applied in 2030.

In addition, important aspects due to the COVID-19 pandemic were also discussed at this event. Rachmat Mardiana, Director of the Directorate of Energy, Telecommunications and Communication at Bappenas, stated that it is projected that until 2022, changes in global geopolitical dynamics and uneven global economic recovery will more or less be a challenge for Indonesia, especially in terms of energy transition. To compensate for this, Rachmat said Indonesia needed to quickly change its economic structure, implementing a greener economy. He also said that the energy sub-sector has a very complex structure that affects the structure of other sectors such as the economy and population; this concludes that energy planning needs to be carried out through careful studies.

Noor Syaifudin, Policy Analyst from Fiscal Policy Agency (BKF), Ministry of Finance said that towards the 41% emission reduction target, Indonesia needs global assistance, which so far has only been found to be in the form of loans that have the consequence of returning public funds. In addition to this, Noor also said it was necessary to prepare a strategy for the utilization and optimization of existing natural resources, as well as an affordable energy transition strategy for Indonesia. Closing the panel session, Noor said that local and provincial governments also have an important role in achieving the net zero emission target.

In closing the event, the panelists and speakers agreed that the involvement of young people and students in the energy transition process and the success of the net zero emission target is very important. For example, students can conduct research related to technological efficiency so that the cost of new and renewable energy is getting cheaper. This is expected to facilitate the making of supporting policies, which are still influenced by the assumption that renewable energy is an expensive technology.

COP26 resulted in the Glasgow Climate Pact but has not satisfied many parties. According to Fabby Tumiwa, Executive Director of the Institute for Essential Services