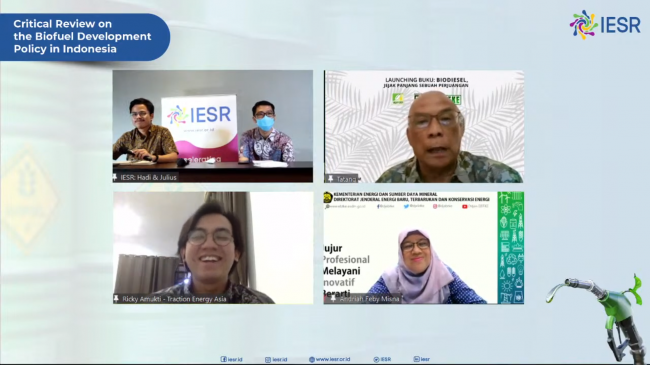 Jakarta, May 4, 2021– Since the early 2000s, Indonesia’s oil production has continued to decline. To meet domestic oil demand, the Indonesian government has imported oil. Therefore, the government has also sought to find alternative fuels. Biofuel is one of the government’s focuses to be developed and became the mainstream of Indonesia’s energy policy.

“There is a hope that biofuel will become a prime energy supply in Indonesia. However, we need to note several points such as the government planning and strategy for the future of biofuel amid the development of alternative technology and energy transition acceleration,” explain Fabby Tumiwa, the Executive Director of Institute of Essential Services Reform (IESR) at the opening of the report launching on the Critical Review on the Biofuel Development Policy in Indonesia. Moreover, the meeting, which was attended by around 70 people online, also discussed the availability of feedstock and price disparities with current fossil fuels.

The Indonesian government’s strategy in developing biofuels has sparked the discussion. Julius Christian Adiatma, the author of the report, states that the use of liquid fuels in Indonesia is dominated by the transportation sector and the trend continues to increase. Under a business as usual scenario, the increase in liquid fuel consumption will triple. In the technology intervention scenario, the penetration of electric vehicles and the use of fuel cells were chosen as solutions. If not properly planned, the development of biofuels and the acceleration of penetration of electric vehicles will collide in the future. The global trend towards the use of electric vehicles also poses a threat that investment in the biofuel sector has the potential to become a stranded asset.

Djoko Siswanto as Secretary-General of the National Energy Council (DEN) said that based on the National Energy Plan (RUEN), until 2050 Indonesia will use a variety of energy sources to meet national energy needs, “We are using fossil fuels and new and renewable energy. Today, we still import crude oil, LPG, and gasoline. So our focus now is reducing imports, because we believe that if there are fewer imports, our energy security will certainly be better. “

Responding to the conditions of price disparity, he acknowledged that the price difference between biofuel and other fossil fuels is a challenge in itself.

“For example, currently green gasoline costs IDR 19,000. Can people afford to buy it? Or will the state be able to subsidize the price difference if it is sold at a lower price? ” he said.

In line with Djoko Siswanto, Andriah Feby Misna, Director of Bioenergy at the Ministry of Energy and Mineral Resources, also said that one of the goals of developing biofuels, such as biodiesel in Indonesia, is to reduce the number of imports of fuel oil, which is currently still high.

“We are referring to RUEN as a roadmap for biofuel development. In 2020, our target is 8 million kiloliters. This target is achieved as biodiesel usage reaches 8.4 million kiloliters. Even so, in the National Grand Strategy, there is an adjustment, namely a reduction of the biodiesel target by 15% with the consideration of the entry of electric vehicles, “explained Feby. Feby added that the government’s homework is gasoline, 50% of which is still imported.

Chairperson of the Indonesian Bioenergy Expert Association, Tatang Hernas Soerawidjaja highlighted the government’s responsive, not-anticipatory tendency in issuing policies on biodiesel as well. “Government policy tends to be reactive rather than anticipative, it’s not prepared for new technologies to come,”

The feedstock for biodiesel, which currently depends on palm oil, is also in Tatang’s spotlight. He said that the dependence on oil palm in biodiesel development is an indicator of unsustainability.

The dependence on one raw material is also a concern of Ricky Amukti, Engagement Manager of Traction Energy Asia. “Unfortunately, our biodiesel product is a single feedstock from palm oil. We have the potential for other raw materials, such as cellulose from palm oil trunks, which can be processed into gasoline. Another potential that exists is biodiesel from used cooking oil which has an emission of 0.31 – 0.62 Kg CO2 equiv/L, “

According to Ricky, if this potential is realized, there will be six million kiloliters of biodiesel produced and 2.2 million new jobs that will be created.

IESR sees it is important for the government to ensure the availability of energy for the community. In the future, liquid fuel will still be needed considering that the penetration of electric vehicles in various regions in Indonesia will vary in the period. Through the launch of the Critical Review on the Biofuel Development Policy in Indonesia, IESR recommends that the government: 1) develop a long-term strategy for the role of biofuels in the energy transition, in line with the development of alternative technologies. 2) Establish clear and transparent criteria for measuring the economic, social, and environmental benefits of the biofuel program. 3) Diversify biofuel feedstocks. 4) Establish policy support to encourage the production and development of second, third, and next-generation biofuels. 5) Change the incentive scheme to encourage innovation to include sustainability as a requirement.

Critical Review on the Biofuel Development Policy in Indonesia