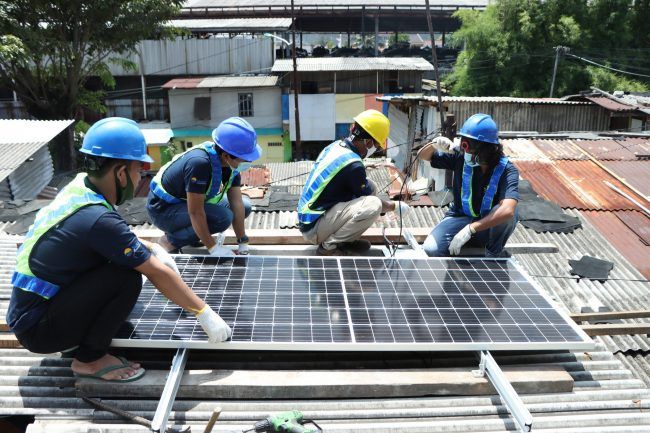 As the name implies, the colourful walls in the houses immediately greet the eyes when entering Kampung Warna Warni at RW 3, Kebon Pala Village, Cililitan, East Jakarta. Gathering at the Citizens’ Hall (Balai Warga), about 10 (ten) people who were dominated by young people, wearing masks to meet Covid-19 protocols, wanted to get technical training on the installation of rooftop solar held by IESR in collaboration with one of the solar PV development companies, ATW Solar, to residents who are members of FAKTA (Forum Warga Kota Jakarta), or Jakarta City Citizens Forum.

The declining cost of solar and wind in the past decade has made the use of renewable energy even more massive. Currently, with an investment of IDR 15-20 million, people can enjoy environmentally-friendly electricity from the solar rooftop for up to 25-30 years. In the labor sector, various groups of people, without higher education requirements, can take part in carrying out solar panel installation by following short practical training and are applicable.

However, if we look deeply at the lifetime of solar rooftops and the calculation of the payback period, the investment value is competitive. According to the IESR calculation, the return on investment period ranges from 7 – 10 years. After this period, it can be said that solar rooftop users enjoy cheap, clean, and environmentally friendly electricity.

For 2 (two) days (25-26 / 3), all participants enthusiastically engaged in the training facilitated by trainers from ATW Solar. On the first day, participants received a basic understanding of roof-top PV technology, various installation networks, components, and safety induction during installation. Meanwhile, on the second day, despite the intense heat, the participants, who were dominated by teenagers, remain enthusiastic to practice the installation of solar panels at the Citizens’ Hall (Balai Warga). ATW Solar also opens opportunities for participants who have the potential and interest in rooftop solar power plants to become freelance workers for ATW Solar so that they can handle projects in the nearby area. This was confirmed by Chairiman, VP Retail, and Residential ATW Solar. He revealed that in terms of job opportunities, installers will be needed in the future. According to him, the Indonesian government has set a target of one million solar rooftops. However, until now only about 3000 PLN customers have used rooftop solar.

“Currently, only 3,000 PLN customers are using the rooftop solar PV, whereas the target is one million users, so there are still around 997 thousand houses that will install rooftop PV. If for one installation we need 4-5 people, meaning that we need more personnel to work on it,” said Chairiman.

The Executive Director of IESR, Fabby Tumiwa, in his remarks, stated that the Kampung Warna Warni is now called as Kampung Surya initiative must belong to the local community. So that the program will sustain.

“This first batch was trained by ATW and continued for on-the-job training and we hope that some can become freelancers for the rooftop PV installers. Later on, those who participated in this training can train other people in this village or even in the next village” said Fabby.

A similar sentiment was conveyed by the chairman of the Jakarta City Citizens Forum (FAKTA), Azas Tigor Nainggolan, “Rooftop PV is a technology that will be widely used in the future, so we must be prepared to take the offered opportunity, not only become spectators.”

Bagas Septiansah, Head of the Regional Youth Organization (Karang Taruna) RT01 RW 03, Kelurahan Kebon Pala, who was one of the participants admitted that he could understand the installation process training easily.

“Previously, I only saw solar panels in large buildings in Jakarta without me knowing what it was. However, after this training, I got a better understanding of the use of solar panels and the process of using solar energy into electrical energy for daily activities,” he said.

Bagas is committed to sharing the knowledge he has gained with the youth group he leads as well as maintaining of the solar panels that have been installed at Balai Warga.

One of the participants, Iskandar, apparently has been installing off-grid solar panels for a long time, only he felt that his knowledge had increased after attending the training, especially about hybrid and on-grid PV rooftop.

“At home, after installing an off-grid solar panel, I felt that there was a reduction in electricity payments because I use solar cells and PLN electricity alternately. With the 40 Wp power solar PV, my electricity bill payments can go down by 20 percent,” he added.

This Kampung Surya initiative is the first in Jakarta, where it’s not only installing Solar PV but also empowers residents as skilled personnel for installers. With this initiative, it is hoped that clean energy will be increasingly enjoyed by all people because clean and high-quality energy is the right of every citizen. Through the training scheme and the installation of PV mini-grid for public facilities, the community can see and enjoy the benefits of installing a rooftop PV mini-grid, such as the emergence of jobs, getting clean electricity, and also being environmentally friendly.

Jakarta, 9 April 2021.  The government through the Ministry of Environment and Forestry (KLHK) recently announced a Long-Term Strategy to achieve carbon neutrality and climate

Jakarta, April 1, 2021, the Institute for Essential Services Reform (IESR)  presented on the Transition towards Green Economic Development in Paser Regency, East Kalimantan in