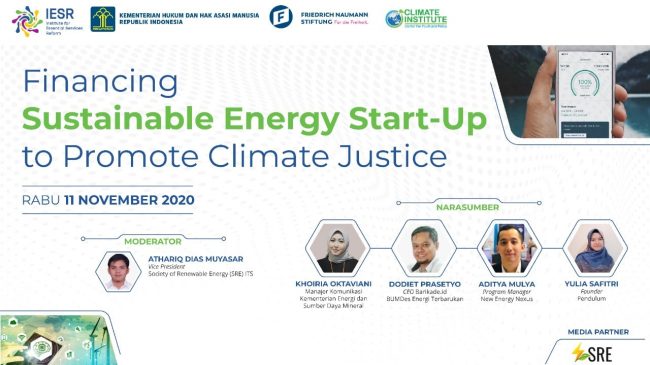 Jakarta, 11 November 2020-In the midst of the COVID-19 pandemic that is beating the world’s economies, the International Energy Agency (IEA) reports that renewable energy (RE), especially in the electricity sector, continues to grow compared to other fossil energies. The IEA is optimistic that by 2025, renewable energy will become the largest source of electricity generation in the world by supplying one-third of the world’s electricity.

This promising development of renewable energy is in line with the spirit of the world in fulfilling the Paris Agreement to prevent the earth’s temperature from rising by more than 2oC. Seeing the trend of many countries in the world that have already made energy transitions from fossil energy to renewable energy, of course, this is increasingly opening up to start businesses in the RE sector.

The Institute for Essential Services Reform (IESR), in collaboration with Friedrich Naumann-Stiftung for Freedom (FNF), held a discussion entitled Financing Sustainable Energy Start-up to Promote Climate Justice to build networks for young people who are interested in developing RE businesses.

Khoiria Oktaviani revealed that Indonesia is committed to reducing greenhouse gases by 29% from business as usual (BAU) by 2030 and 41% with international support. Indonesia has an RE mix target of 23% in 2025. However, until today, it has only reached 9%.

She highlighted that the opportunity to develop a business in the RE field is numerous because Indonesia has majestic potential in RE.

Khoiria invited the Indonesian youth generation to be involved in developing RE startups. She explained that since 2018, the Ministry of Energy and Mineral Resources has taken an active role as a hub for various stakeholders to encourage the application of RE.

“We provide access to ideas, innovations, pilot and semi-commercial projects, and connect startups with governments, associations, or funders or capacity building in the energy sector,” she explained.

She stated that currently, it is easier to gain business financing in the RE sector. If only, as Khoiria reminded, the startups ensure their products are not only innovative but also applicable to society. It will make the product stay sustainable fot it answers the issues in the community. Besides, she urged RE business pioneers to recognize the market and develop their products.

“Therefore, we do not stop at just one product. We should follow the pattern of community consumption. If it changes, then we must adapt as well. It is also important to promote our products and collaborate with various parties, ”Khoiria explained.

Dodiet experienced the importance of the collaboration to develop RE in his assisted village. As a provider of consolidation services for 25 Bumdes (village-owned enterprises)  in Banyumas, he felt that the networking in RE helped them to map the potential of river water by conducting a feasibility study for the development of RE electricity in the village.

Although Dodiet finds challenges in developing RE in the village, for example, such as laborious village contours or uneven sources of RE, he believes that rural communities can compete and innovate to be energy independent villages.

On the other hand, Aditya found that from his mentoring to RE startups, many startup projects are still ideas. Through New Energy Nexus, he assists them in moving forward by channeling startup groups with mentors, increasing their capacity in the fields of finance, promotion, or website development.

One of the assisted startups in New Energy Nexus, Yulia from Pendulum, shares her story when she built her business that focuses on wave power. It took her three years to make her idea into reality.

Yulia as an ITS graduate tries to solve the problem of bagan fishermen (light fishing)  in meeting their fuel needs while fishing on the sea. Bagan fishermen are fishermen who use nets and lights as a fishing instrument composed of bamboo, which is stuck into the seabed, while the upper container is equipped with a generator and gas to turn on the lights. The lamp is for drawing the fish into the net. These bagan fishermen need at least 4.5 kg of gas to keep the lights on. Besides the high price, they also have to queue to get the fuel. Moreover, they struggled to maintain electrical systems in the middle of the sea.

The development of ocean wave energy will overcome their energy needs because it can be directly produced from the ocean waves.

Yulia feels that nowadays, the opportunity is opening bigger for young people to start a startup because the ecosystem that supports the development of RE has been formed. The panelists agreed that to keep startups sustainable, it requires a binding agreement for everyone involved in building a startup as well as building a network with diversified expertise and policy support that benefits RE from the government.