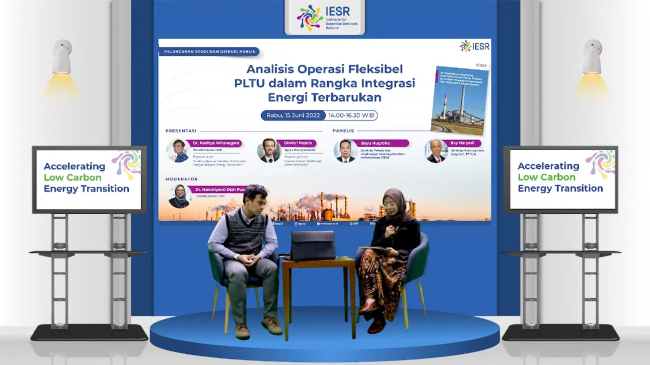 Jakarta, 15 June 2022 – Indonesia has committed to no longer build coal except those already in the contract process. At COP 26, the Minister of Energy and Mineral Resources said that Indonesia is ready to retire 9.2 GW of coal-fired power plants if there is international assistance. The Ministry of Energy and Mineral Resources is targeting old power plants whose efficiency has decreased. To pursue the 23% energy mix by 2025, apart from executing the plan to add renewable energy capacity in the RUPTL, at least 18 GW of solar energy is still needed until 2025 to meet the 23% renewable energy target in the national energy mix.

Another alternative that can be taken is to integrate renewables into the current electricity system by modifying the CFPP to be more flexible. In the latest IESR’s report, entitled Flexible Thermal Power Plant: An Analysis of Operating Coal-Fired Power Plants Flexibly to Enable the High-Level Variable Renewables in Indonesia’s Power System, it is explained that flexible CFPP’s operations can be carried out in Indonesia by retrofitting the CFPP unit first.

The retrofitting process will make the CFPP operation more flexible by reducing the minimum load. This is done to reduce operational costs that arise due to the increase in the start-up/shutdown process as a consequence of the increase in renewable energy variables in the grid. Two countries that have carried out CFPP operations flexibly are Germany and India.

“In Germany the CFPPs being retrofitted are the old ones. One of the strategies taken is to provide incentives for thermal power plants. Meanwhile in India, flexible CFPP operations are still in the pilot project stage, and currently preparing market policy instruments like what has been done in Germany,” explained Raditya Wiranegara, author of the Flexible Thermal Power Plant report.

Raditya added that the cost of generating flexible coal power plants is lower than gas turbine or combine cycle so that it can be considered as an option for generating power in the transition period efficiently and making room for renewable energy.

Bayu Nugroho, Director of Electrical Engineering and Environment, Ministry of Energy and Mineral Resources, said that it is possible to operate this flexible power plant in Indonesia, but some preparations need to be made beforehand.

“To achieve NZE 2060 we have to make various efforts. One of them that the government is currently preparing is a carbon tax mechanism. This scheme can also be done, we (Ministry of Energy and Mineral Resources) need to mix everything so that it can run optimally,” explained Bayu in the panel discussion during the report launch.

Arief Sugianto, VP of PLN’s RUPTL Control, stated a number of prerequisites if we want to make the coal fleet in Indonesia operate flexibly.

“First we need to think about what incentives will be given to the CFPP which will be operated flexibly, and who will bear the subsidy,” he said.

Arief added, in the context of PLN, which uses a take or pay scheme in buying and selling electricity with an IPP, it is rather difficult to directly implement this flexible PLTU operation because the initial retrofit costs will burden the government or customers.

With the current state of coal still dominating electricity generation in Indonesia, there are several steps the government can take to increase the renewable energy mix, including reducing coal capacity and operating CFPP flexibly.

“We see that there are 5 GW of old coal capacity (above 35 years) as low-hanging fruit that can be retired immediately, because its efficiency has decreased and is full of emissions,” explained Fabby Tumiwa, Executive Director of IESR.

Fabby added that operating the CFPP flexibly can open up some space for renewable energy to enter the grid.

“Flexible power plant is not a clean energy source, but it provides space for renewables to be  integrated into the grid efficiently, so it can be used as a temporary solution to transition to a renewable energy system,” said Dimitri.

Dimitri further explained that the technology used in flexible CFPP operation is quite complex and still produces emissions, so the carbon price instrument is an important element to maintain a balance and we must immediately switch to a renewable energy system.