Measuring the Urgency of EBT Bill 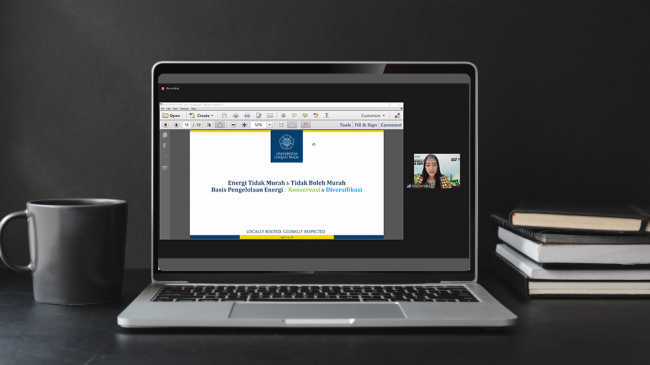 Jakarta, 10 September 2021 – Since January 2021, the Indonesian House of Representatives Commission VII has prepared an academic paper for the New and Renewable Energy (EBT) Bill and is currently in the process of consolidation. This bill is considered important to provide legal certainty for the development of renewable energy in Indonesia. Even so, until now several parties have expressed objections to the substance or questioned the urgency of this law.

The development of renewable energy in Indonesia itself over the last five years has not been encouraging. The average additional installed capacity per year is only around 400 MW. In fact, Indonesia has a commitment to achieve 23% of renewable energy in the primary energy mix by 2025. Currently, Indonesia’s achievement is still in the range of 11-12%. As time is running out, various strategies are needed to accelerate the development of renewable energy in Indonesia. In collaboration with Soegijapranata Catholic University, the Institute for Essential Services Reform (IESR) held a webinar entitled “New and Renewable Energy Bill: for Whom?”. This webinar aims to explore the perspectives of various fields and hopes to formulate recommendations for this bill.

In his opening remarks, Fabby Tumiwa, Executive Director of IESR reminded the importance of the public knowing about the New and Renewable Energy (EBT) Bill and having the space and opportunity to provide their views on this Bill.

“In the midst of Indonesia’s current condition of pursuing net-zero emissions of 2060 or faster, the development of renewable energy is one of the keys to achieving this target. The role of the EBT Bill is important here,” explained Fabby. 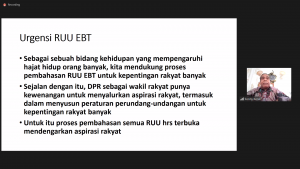 Sonny Keraf, the Indonesian Minister of the Environment from 1999 to 2001, revealed that the problem of renewable energy which is slow in progress is not a problem in the regulations, but lies in the government’s seriousness in transitioning from fossil energy to clean energy.

“So if the big question is do we need this New and Renewable Energy Law? The answer could be no. Because we already have enough regulations that regulate energy in detail,” he said.

Irine Handika, Lecturer at the Faculty of Law, Gadjah Mada University, has a similar argument with Sonny. From the legal aspect, according to her, there are several things that are problematic about the New and Renewable Energy (EBT) Bill. One of them is the term ‘new energy’ which will make this law die before it is born. This is because the ‘new energy’ parameter itself is uncertain and unclear.

“We see that currently the main problem is at the implementation level of existing energy regulations, so making new laws may not be the right solution. Even if it is considered that there are things that have not been covered in existing regulations, the solution that can be taken is revisions or amendments to existing regulations or laws,” explained Irine. 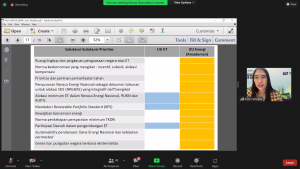 The partiality of the new law will really be seen when the draft law is finalized, but we need to ensure that the substance of the EBT Bill is not counterproductive to Indonesia’s decarbonization ideals to become net-zero emissions by 2060.