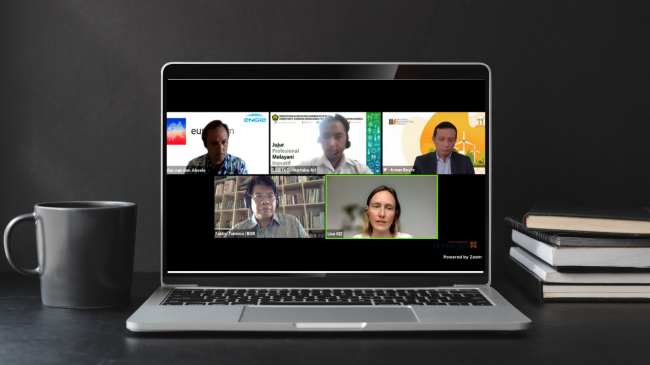 Jakarta, 1 July 2021. To achieve the target of 23 % of the renewable energy mix, now reaching 11,2%, the Indonesian government is currently reviewing the regulation related to renewable energy, especially solar PV, promising that it will be the progressive policy for solar development in Indonesia.

Mustaba Ari Suryoko, Head of Sub-directorate for Supervision of New, Renewable Energy Infrastructure Development, and Energy Conservation at the Directorate General of New, Renewable Energy, and Energy Conservation, MEMR, during the Asian Solar Summit 2021, explained that in response to accelerating renewable energy deployment, the Indonesian government made some improvement points in the Minister Decree No 49/2018 about the solar rooftop, related to the net meter tariffs.

Indonesia is a large country blessed with abundant sources of renewables. Institute for Essential Services Reform’s latest study shows that Indonesia has 20,000 GWp of solar PV technical potential. Despite the abundance of renewables, solar becomes the low-hanging fruit to develop as it can be installed modularly, and it is available all across the country.

Moreover, Ari also shares the progress of presidential regulation on renewable energy regarding the purchase of electricity by PLN, explaining several schemes provided to get the best price.

“PLN as the State-Owned Utility Company is also discussing the new RUPTL that will accommodate a bigger share of renewables up to 48% of power generation. It increases significantly from the previous planning that will only accommodate 30% of renewables,” he added.

Nicolas van den Abeele, Head of Business Development of ENGIE, gladly appreciates the government’s effort to accelerate renewables focusing on solar installation. As the Indonesian market is developing and big potential for the solar market is widely available. The initiative from the government in reviewing and revising several policies is a key to boost solar deployment in Indonesia.

“Despite the big market potential in Indonesia to integrate big-scale solar, especially in the Java – Bali – Sumatra grid, the rule of the game is at times volatile and unclear related to varying power purchase agreement, and different pricing from different companies,” said Nicolas.

Nicolas also raised the obligation to fulfill local content requirements for solar panels as a constraint. “It is understood that the Indonesian government wants to develop the local industries, however this requirement somehow discourages foreign investors, since at this stage, it’s not proven yet that the capacity is enough, nor is it of sufficient quality,” he said.

The Executive Director of IESR, Fabby Tumiwa, highlights the change of attitude of the government and hopes that it’ll become a good start to shift Indonesia’s energy system to a cleaner and sustainable one. Though he also raised that currently Indonesia’s government ‘fails’ to catch the economic benefit of solar, as the cost of PV installations has fallen up to 90% in the last ten years.

“Previously, solar PV was seen as an expensive technology that cannot compete with fossil fuel, which has changed now. Solar is quite competitive now yet its deployment is still so slow in Indonesia. Hopefully, the government’s commitment seen from the effort to revise some regulations may transform Indonesia into the next hotspot for solar power development,” Fabby said.

There are numerous parties interested in solar development in Indonesia, but the issue right now is whether there is enough project supply. The government target to reach 23% of renewables in 2025 and the higher target in the upcoming RUPTL must be translated into the project pipeline.

Completing the discussion, Irman Boyle, Executive Vice President of PT Indonesia Infrastructure Finance, shared his view on the potential and challenges of renewables development in Indonesia,

“Basically from the equity and debt sides many parties are interested to finance the renewables project but until now, there is not enough project pipeline. Therefore the government (the MEMR and EBTKE) as well as PLN, need to ‘do the homework’ to make sure that there are enough projects available,” said Irman.

Jakarta, August 3, 2022– CFPP early retirement needs to be done to achieve emission-free by 2050 according to the Paris Agreement commitments. A study by