Jakarta, April 1, 2021, the Institute for Essential Services Reform (IESR)  presented on the Transition towards Green Economic Development in Paser Regency, East Kalimantan in Musrenbang (Musyawarah Rencana Pembangunan Daerah), and Public Consultation of the RPJMD (the regional mid-plan development) 2021-2026 Paser Regency (1/4). This opportunity was a follow-up to the IESR meeting with Bappeda East Kalimantan and Paser Regency in 2020.

In front of the Regent of Paser and his staffs, IESR encouraged the Paser government to no longer rely on coal in both the energy and economic sectors but began to diversify the economy to increase Paser’s economy such as industrial development, including the agricultural industry (rice, maize, shallots), the tourism industry, and the renewable energy industry. 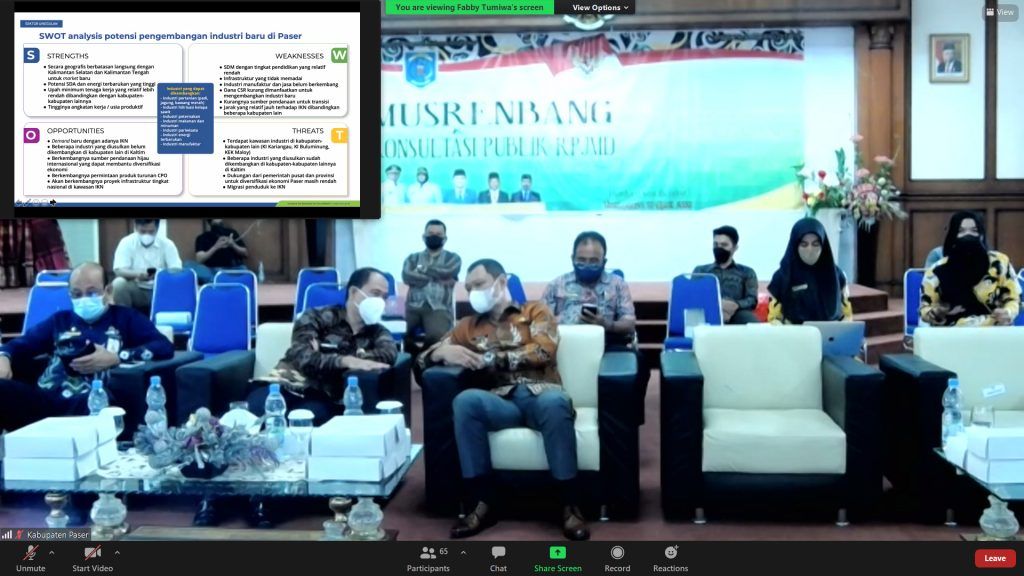 To date, Paser has depended on the Gross Regional Domestic Product (GRDP) on coal. It makes Paser vulnerable to economic turmoil due to decreasing demand for export coal. It is because many coal importing countries have adopted energy transitions. Particularly, since 80% of Paser’s coal production is exported so that Paser’s economic growth is strongly influenced by Reference Coal Prices (Harga Batubara Acuan, HBA).

“Coal export destination countries such as China, India, Korea, and Japan are very ambitious in making an energy transition. Furthermore, many countries to overcome the threat of the climate crisis are moving from fossil energy to renewable energy. It is estimated that in 2050 world coal demand will fall by 40-90%. Of course, this decline in demand will occur gradually soon. It warns the regions that have been the largest coal producer, such as East Kalimantan, “said Fabby Tumiwa, Executive Director of IESR.

This situation was also acknowledged by HM Aswin, Head of Bappeda East Kalimantan, “Although the structure of East Kalimantan’s GRDP is still dominated by the mining and quarrying sector, the declining coal price and low demand for coal from export destination countries still make the economic growth of the coal sector minus 4.58 in East Kalimantan.”

The contribution of the coal sector to the GRDP of Paser is very large, more than 70%, but the GRDP per capita of Paser Regency has been relatively stagnant in the last decade. This indicates that the mining industry has very limited leverage to support economic growth. For this reason, the government is required to develop a new economic sector.

“Coal production is relatively stagnant, but 95% of this production activity is carried out by one company only. So that in 2016 there was a decline in the production of the mining sector, especially coal, causing negative economic growth in Paser Regency 2016 (Diskominfo Paser, 2019), “added Fabby.

A similar opinion was conveyed by the Chairperson of the Paser Regency DPRD, Hendra Wahyudi, on the same occasion when he conveyed the main thoughts of the DPRD in the context of the preparation of the Paser Regency Work Plans 2022 and the Regional Medium Term Development Plan Public Consultation of 2021-2026. He emphasized that the economic contraction during COVID-19 was significantly impacted Paser, with economic growth of minus 2.77 in 2020.

“We suggest taking strategic steps by maximizing the non-mining economic sector such as the agricultural, processing, and trade industries so that they do not depend too much on the mining and quarrying industry,” he said.

The IESR analysis shows that the agriculture, fisheries, and hunting sectors absorb more labour than mining, which only ranks fourth. Moreover, the agricultural industries have experienced less significant economic fluctuations when compared to the mining sector.

Paser’s Agricultural Industry Included in the Focus of Green Development

The direction of the East Kalimantan Bappeda (Agency for Regional Development) as placing Paser as the center of agriculture and food for the New Capital City of Indonesia (IKN), especially for rice, onion, and chilli commodities, will encourage Paser to improve infrastructure that supports the agricultural industry and protects Sustainable Food Agricultural Land (LP2B).

Increasing the productivity of rice fields can also increase employment in the agricultural sector. The calculation of the increase in land productivity to 7 tons/ha and assuming a fixed amount of land, then Paser Regency can absorb around 9,479 workers. This figure is equivalent to the number of workers in the mining sector. It means that it can absorb the workforce affected by the decline in mining activities.

Furthermore, through the IESR calculations, Paser also has enormous renewable energy potential, with the successively technical production of Rooftop Solar of nearly 81000 GWh/year, water energy of 721 GWh/year, and pumped hydro storage (PHS), 3,5 thousand GWh/year. The development of the electricity sector based on renewable energy will be able to supply electricity for IKN and other areas around Paser.

“Paser Regency has Corporate Social Responsibility (CSR) funds of 58 billion in 2020. This fund can be used for the development of MSMEs and human resources more optimally,” said Fabby.

He suggested that the process of economic transformation requires careful planning. The Paser government must plan a more comprehensive study; the impact of the energy transition on the coal industry, local economy, environment, and health so that Paser can make a road map for Paser’s economic transformation. Another thing that needs to be prepared and deepened is the diversification of the economy, its supporting considerations, and policies.

Regent Paser in his speech also said that his party would prioritize the agricultural sector.

“I hope the agriculture department can compile a work plan to improve the agricultural program in Paser. We have large tracts of land in 139 villages. Activating this land with modern agricultural technology will open up job opportunities for youth. Agriculture will be our focus, ”promised the Regent of Paser, Fahmi Fadli.

Jakarta, May 4, 2021– Since the early 2000s, Indonesia’s oil production has continued to decline. To meet domestic oil demand, the Indonesian government has imported

Jakarta, 28 April 2021 — President Joko Widodo’s speech during the Leader Summit on Climate Change which stated that he would seriously tackle the issue

Selengkapnya >
On Climate Crisis, Accelerating Energy in Indonesia is a Must
2 May 2021 No Comments

Jakarta, 27 April 2021 – Indonesia can protect the earth from carbon emissions by encouraging the acceleration of renewable energy development. The urge for the