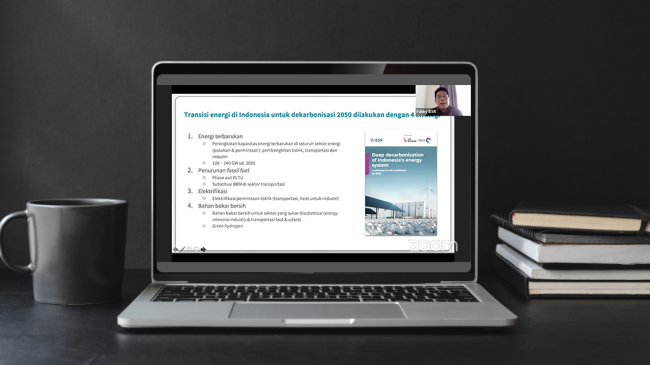 Jakarta, 14 December 2021 – 2021 is considered as a progressive period marked by a number of important events and the birth of various commitments aimed to reduce the impact of climate change. A number of heads of state in the world are competing to show their leadership in dealing with climate change. This is not surprising because according to the report from the Intergovernmental Panel on Climate Change (IPCC) AR6, in August 2021, it was stated that the time for us to repress the increased global temperature below 1.5 degrees Celsius is less than a decade. Our climate action in a couple years to go will determine whether we will succeed in achieving the climate target under the Paris Agreement, which is to achieve net-zero emissions by the mid of this century.

To explore perspectives and encourage collaboration from various parties, the Indonesia Business Council for Sustainable Development (IBCSD) held a webinar titled “What Net Zero Emission Means for the Private Sector” on Tuesday, December 14, 2021.

Indonesia through the Ministry of Environment and Forestry has updated its NDC and equipped it with a strategic document, Long Term Strategy – Low Carbon Climate Resilience aligned with the Paris Agreement (LTS – LCCR). Indonesia also announced net-zero emissions by 2060 (or sooner). With climate change increasingly critical, the Government of Indonesia is urged to accelerate its net-zero emission target.

Laksmi Dewanthi, Director General of Climate Change Control at the Ministry of Environment and Forestry, said that the government is aware of the need to accelerate net-zero emissions.

“So, if we want to achieve net-zero faster, we ask all stakeholders to take more roles in Indonesia’s net-zero plan,” she said.

Medrilzam, Director of the Environment at National Development Agency (Bappenas) added, collaboration and concrete actions from all parties will be the key to achieve the net-zero emission target in Indonesia. “The government needs to prepare enabling conditions so that cooperation with the private sector and other parties can run well,” he said.

Medrilzam also emphasized that based on the Bappenas study, low carbon development results in higher economic benefits than business as usual.

Not only for the government, there are various benefits for corporations if they have a net-zero emission target.

“Aligning to climate science is good for business. Because apart from being in line with the government’s agenda, implementing climate commitments also increases the competitiveness of companies. Companies are expected to continue to seize such opportunities,” explained Amelie Tan, Regional Lead for the Carbon Disclosure Project.

On the same occasion, the Executive Director of IESR, Fabby Tumiwa, emphasized that the government needs to intervene in at least four areas to encourage private sectors to move towards low-carbon businesses. The four sectors include (1)policies and regulations, (2) low-carbon technology and infrastructure, (3) innovation, and (4) raising market and consumer awareness to choose low-carbon products.

Fabby also added the importance of carbon emission disclosure for corporations who are committed to reducing their emissions so that the wider community knows which companies have commitments to control climate change.