On Climate Crisis, Accelerating Energy in Indonesia is a Must 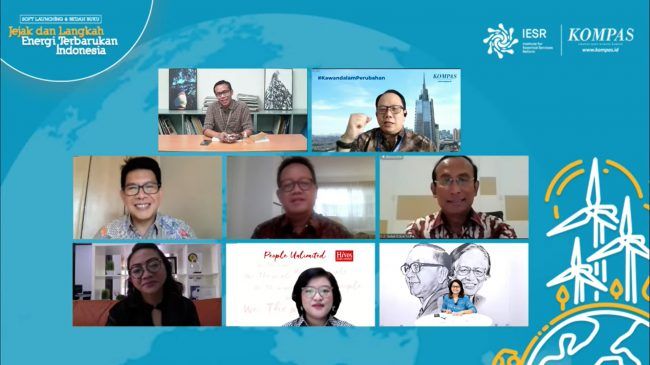 Jakarta, 27 April 2021 – Indonesia can protect the earth from carbon emissions by encouraging the acceleration of renewable energy development. The urge for the government to be more confident, courageous, and ambitious in developing clean energy was voiced in the discussion and book soft-launching “Footprints and Pathway for Indonesia’s Renewable Energy” by Kompas journalists hold by Harian Kompas and the Institute for Essential Services Reform (IESR) (27/4).

Sutta Dharmasaputra, Editor-in-Chief of Kompas Daily, said that Harian Kompas’ editorial policy supports the acceleration of renewable energy. He stated that the current increase in the earth’s temperature is due to the use of fossil energy so that the speeding up of renewable energy will be able to keep its temperature at not exceeding 2 degrees Celsius.

“Hydrometeorological disasters in Indonesia for one year caused a loss of 22.3 trillion rupiahs. I casually calculated that if using that amount of money to buy Padang rice, it would be equivalent to 639 million boxes of Nasi Padang (Lunch Box). It’s a huge loss, ”he said.

Fabby Tumiwa, Executive Director of IESR, on the same occasion, said that over time, the climate crisis would have to be more serious.

“The study of experts states that if the global temperature rises by more than 1.5 degrees, it has broader implications for the ecosystem, food production, and the economy as a whole,” he explained.

An energy transition is an option that must be taken by policymakers to reduce greenhouse emissions. Fossil energy systems contribute 75 percent of GHGs worldwide. The Paris Agreement even mandates all countries in the world to develop renewable energy to achieve carbon neutrality by 2050.

“This means, currently, our NDC target is not compatible with the Paris Agreement. If we want emissions compatible, then we have to reach the peak (peak emission) in 2030 and have to drop drastically by 2050. If it is too late, the efforts must be more drastic and more expensive, “he said.

IESR has completed carbon-neutral modeling of Indonesia in 2050 which shows that Indonesia will be able to achieve net-zero by 2050. Even by using 100% renewable energy, the cost of energy systems will be cheaper than systems based on fossil energy.

“The electricity sector is a quick win because the development of renewable energy in this sector can be faster than industry and transportation. Indeed, the energy transition policy requires many innovations, changes in regulations, and the way we look at the energy resources we have. However, if we can do 100% renewable energy, 3.2 million new jobs will be created, ”said Fabby.

In line with Fabby, the head of the writing team, Aris Prasetyo, explained that the development of renewable energy by boosting an energy transition is something that will happen. He also shared about the energy independence he met during his visit to Kamanggih Village in Kahunga Eti Subdistrict in East Sumba.

“The community is energy-independent. The electricity comes from the Micro Hydro Power Plant (PLTMH), and even they sold the surplus to PLN. For cooking, they use biogas from livestock manure. However, when this pandemic occurred, it turned out that PLTMH customers did not get a discount on electricity rates, meaning something clean and supporting government programs and climate change adaptation was not supported, while programs that depend on fossil energy received incentives, “he said.

Aris also added that policy imbalances also occur on an industrial scale, especially in the matter of buying and selling tariffs for electricity from renewable energy. He said that even the developer felt the tariff offered by PLN is not economical for developers because the production costs are higher. As for the renewable energy tariff policy, the Perpres does not establish yet.

Questioning about renewable energy policies, Sugeng Suparwoto, Chairman of the House of Representatives Commission VII DPR RI is determined to finalize the law on renewable energy, although, according to him, many interests do not support the emergence of this law.

“Even though the existence of this law will create an ecosystem that supports the development of EBT,” added Sugeng.

On the other hand, Satya Widya Yudha, a member of the National Energy Council, views that in building energy security, the government must ensure supply security, accessibility, affordability with capability, and environmentally friendly.

“If we talk about the economy, then the renewable energy that can be further developed is PLTS. We are pumping PLTS on a large scale, “he said.

IESR is soliciting individual/organization/Production house in Indonesia to submit a proposal to produce a video campaign project, please refer to the document below to see

Selengkapnya >
Women in Energy: Ensuring the Presence of Gender Equity and Equality in Energy Sector
26 July 2021 No Comments

Energy is a basic need for everyone, including women. So it is appropriate to consider the allocation and supply of energy that meets the needs

Please refer to the document below: