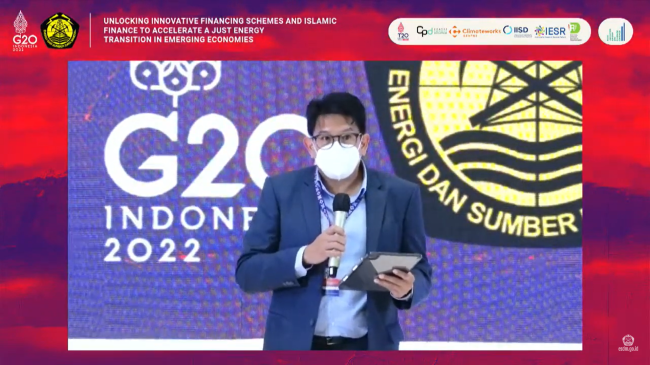 Jakarta, 27 June 2022 – Energy transition has been a global concern lately. As the urge to address climate change rises, energy transition becomes one of the key actions in keeping the global temperature. Fossil fuel burning is believed to be one of the biggest pollutants of GHG that causes temperature rises. Therefore, shifting the energy system into a renewable one is essential to cut  polluting emissions.

Minister of Energy and Mineral Resources of Indonesia, Arifin Tasrif, in the G20 seminar titled “Unlocking Innovative Financing Scheme and Islamic Finance, to Accelerate a Just Energy Transition in Emerging Economies” said that during this time, energy transition is challenging.

“With the Covid-19 and the escalation of conflict between Ukraine and Russia, energy transition is challenging as well as for Indonesia as the G20 presidency this year,” he said.

“One of the potentials to finance the transition is Sukuk/Islamic bonds as an instrument to raise funds from the public for the energy transition. Sukuk innovation and promotion need to be improved so that people are more interested to invest,” Amin said.

At the same event, the Minister of Finance, Sri Mulyani, explained that Indonesia is currently looking for a strategic way to finance energy transition through various schemes.

“We just launched Energy Transition Mechanism (ETM) with ADB to support coal retirement. We will also apply a carbon pricing mechanism for CFPP, as well as develop blended finance. Since 2018 Indonesia successfully issued green sukuk, and it is allocated for the green sector and climate mitigation project,” she concluded.

Sri Mulyani also added that to fulfil Indonesia’s NDC target, the state budget is only able to cover around 34% of the required budget. For the rest, we need to figure out a way, in order to finance the transition.

The fossil fuel economy has supported Indonesia’s economy for decades. Not only the economy, but the electricity and energy system is also dominated by fossil fuels. No wonder shifting it into a renewable-based system is challenging, not to mention requires huge investment. However we cannot just stay in the fossil-based economy either. Coal demand around the world will be declining as the climate commitment strengthened, and the coal mining region will see the impact soon in 2030. Coal has brought revenue for Indonesia especially for the coal mining region, transforming from coal meaning that we will lose this revenue. This has to be anticipated or else there will be a catastrophic impact on the coal transition.

Fabby Tumiwa, the Executive Director of the Institute for Essential Services Reform highlighted that providing sufficient finance for transition is not only addressing the finance issue but also the impact of the energy transition itself.

“This (providing finance for transition) is a key for Indonesia to reach a just and inclusive transition that leads to equitable development,” Fabby said.

Besides seeking affordable financing, there should be a shift in the behaviour of the financial institution. Indonesia’s financial institutions usually lack the technical ability to assess the risk of renewables projects. Amjad Abdulla, Head of Partnership IRENA, emphasized  this matter.

In terms of moving away from coal, the government needs to calculate how much it can be covered by the just transition mechanism, and how much is left behind so we need to prepare for them; this includes upskilling workers, creating economic diversification, etc.

Udetanshu, Climate Transition Analyst, said that besides the budget that should be prepared, the government also needs to ensure that the local workers who previously worked in the CFPP get new job opportunities.

“If possible, the new plant (that will be renewable) should be built near the old one, to ensure that the workers can be hired locally,” she said.