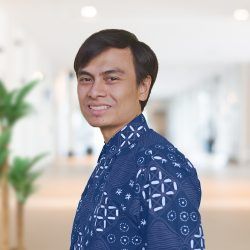 Radit’s passion for energy transition research theme has led him to IESR, where he took up the role as a Senior Researcher in Renewable Energy. He is responsible for conducting research on the energy transition in Indonesia towards 100% renewables. Part of this is on the decarbonization of the country’s available thermal power plants.

Prior to his role now, he was a doctoral researcher at Cranfield University, UK. His research there was part of an EU-funded project, TURBO-REFLEX (TURBOmachinery REtrofitting enabling FLEXible back-up capacity). The project itself aims at providing technology upgrades to retrofit existing power plants, which in the case of the project is the gas-fired one, enabling them to operate flexibly alongside the renewables without penalties on the plants’ components life, operating cost, and emissions. Major European Gas Turbine (GT) OEM, well-known research institutes and universities are part of the project. Radit contributed to one of the Work Packages (WPs) to look at the impact of an integrated system that combines the GT with Compressed Air Energy Storage (CAES) on the GT combustor performance and emissions. His interaction with one of the project industrial partners, Mitsubishi Power Europe, gave him a good sense of the feasibility and applicability of the system within the context of the energy transition. He holds two master’s degrees, respectively, in Thermal Power and Fluid Engineering and Mechanical Engineering, both obtained from the University of Manchester, UK. His bachelor’s degree in Mechanical Engineering was awarded by Institut Teknologi Bandung.

Radit is a public transport and bicycle commuting enthusiast. The interests were developed during his time in the UK, where he had to commute between London and Cranfield. He believes Indonesia should have more cycle lanes on its roads to encourage its citizens to use a bicycle, especially to work, therefore supporting the nation’s agenda on net-zero emissions, eventually. He is also an avid runner to keep himself fit and healthy; physically and mentally.