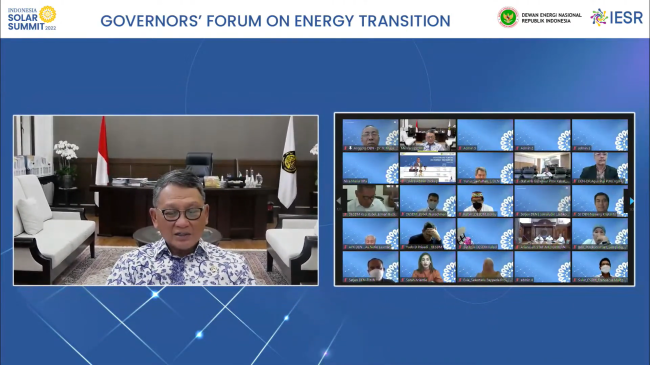 Jakarta, March 9, 2022 – The Ministry of Energy and Mineral Resources recorded an increase of 217 MW in mid-2021. This brings the total renewable energy generating capacity in September 2021 to 10,807 MW. Nationally, Indonesia’s energy mix is ​​still dominated by fossil energy up to 85%. The Indonesian government has taken the initiative to accelerate the penetration of renewable energy in the energy mix, one of which is through the RUPTL (Electricity Supply Business Plan) document for 2021 – 2030. In this document, the government targets the addition of electricity from renewable energy plants by 51.6% or 20,923 MW. Cooperation with various parties, including local governments and the private sector is important to achieve the RUPTL targets and accelerate the energy transition in Indonesia. One of the focuses of the Indonesian government is to increase the installed capacity of renewable energy by including rooftop solar in the national strategy program.

Minister of Energy and Mineral Resources, Arifin Tasrif, in his remarks at the Governor’s Forum for Energy Transition, which was held on March 9, 2022 by the National Energy Council in collaboration with the Institute for Essential Services Reform (IESR) emphasized the role of local governments in Indonesia’s energy transition.

“Local governments are expected to make policies that are more in favor of developing new and renewable energy (EBT) and support energy saving efforts. Support can be seen from the Regional Medium Term Development Plan (RPJMD). The RPJMD which is oriented towards energy transition and green energy-based economic acceleration will be a key factor in the success of the energy transition in the regions. The Regional Energy General Plan (RUED) will also be a reference for making energy transitions in the regions.”

“The government of Southeast Sulawesi has made efforts to encourage investment and development of new and renewable energy through solar PV and geothermal power plants (PLTP), hopefully they will become role models throughout Indonesia,” said the Governor of Southeast Sulawesi, Ali Mazi.

In addition, several regions have a fairly high renewable energy target, such as West Sumatra at 51.7% in 2025. Audy Joinaldy, Deputy Governor of West Sumatra, on the same occasion stated that his party is working on diversifying energy sources and one of the priorities is the installation of rooftop PV.

“Every year we install PV rooftops, especially for households that have not received PLN electricity. The installation of PV rooftops is also carried out in government buildings, as well as floating PV on Lake Singkarak,” he explained.

Audy added that one of the big obstacles for local governments to develop renewable energy is limited access to funding. So it needs assistance from the central government for financial access.

In response, Musri, a member of the National Energy Council, said that the government has issued supporting regulations such as the Minister of Energy and Mineral Resources Regulation 26/2021 which is expected to attract consumers to use renewable energy such as rooftop solar power plants, but there are further technical problems such as the PLN network.

“If we talk about the energy mix, of course this is not only from the electricity sector, other sectors such as transportation also play a role. To encourage the energy transition in Indonesia, local wisdom must be encouraged so that the steps taken are in accordance with the potential and the local social context,” Musri explained.

The province located in the eastern part of Indonesia, West Nusa Tenggara, is targeting 25% renewable energy in its energy mix by 2025. Zainal Abe, Head of the ESDM Office of West Nusa Tenggara, explained that his party is currently drafting a Governor’s Regulation on green energy.

“Hopefully in the future, the roofs of government offices, especially the MEMR Office can use rooftop solar panels,” said Zainal.