Renewable Energy Development First, Nuclear should be the last option or not at all 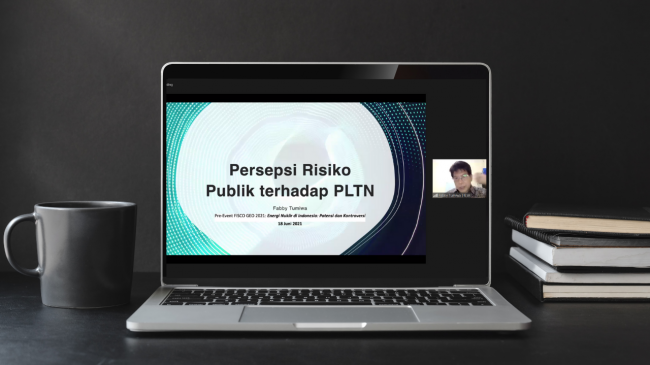 Nuclear energy has created a dialogue and debate about the benefits and risks it brings. On the one hand, nuclear energy can meet energy needs, and can be used in various fields such as medical and military. But nuclear power also carries the risk of radiation leakage. There are noteworthy nuclear accidents, starting from Three Mile Island (1979), Chernobyl (1986), and Fukushima (2011). From this the question arises, is nuclear still worthy to be developed on a large scale? If so, what aspects must be considered in its development? Presenting three speakers with different backgrounds, FISCO UGM held a webinar on Nuclear Potential and Controversy to try to solve this question.

On the occasion, Fabby Tumiwa, Executive Director of IESR, said that there are several things that must be considered regarding the development of nuclear energy, including three factors of nuclear reactor safety, namely regulations or regulatory bodies, operational security, and security systems.

To ensure this security aspect, in addition to strict regulatory bodies and security procedures, the economic or cost issues required also need to be re-examined.

“The trend of nuclear power plant investment from year to year is getting more expensive. If the goal of building a nuclear power plant is to meet the growing demand for electricity, then there are other renewable energy alternatives that are more affordable and less dangerous,” continued Fabby.

Environmental factors, including public acceptance, are important and make this nuclear issue dynamic. Derajad S. Widhyharto, Lecturer of Sociology at the Faculty of Social and Political Sciences, UGM, also revealed that the public’s concern about nuclear power, both as nuclear power plants and new energy, lies in management issues.

The management aspect that is a concern for the community is further exacerbated by the dynamics of nuclear regulation which are not interrelated with the findings of surveys or research conducted by various institutions.

Alexander Agung, a lecturer in Nuclear Engineering UGM, complements this discussion with a more technical perspective on nuclear energy. Nuclear power plants were developed to meet the increasing demand for electricity, as well as to support industrialization. Countries such as the United States, Japan, and European countries do meet their electricity needs from nuclear plants.

However, in its development, it is also necessary to ensure that this regulatory body continues to work optimally so that the development of nuclear energy does not endanger the community and the surrounding environment.

Jakarta, 9 September, 2021-In the past year, there was a dynamic change in the energy sector. The approaching deadline of the Paris Agreement and the

Jakarta, August 26, 2021 – The coal industry in Indonesia has a high enough risk to become one of the stranded assets in the future,

The Director of Electricity, Telecommunications and Information at the Ministry of National Development Planning said that the optimal zero emission scenario option would be achieved