Seizing and Keeping the Momentum of Solar Energy Rise 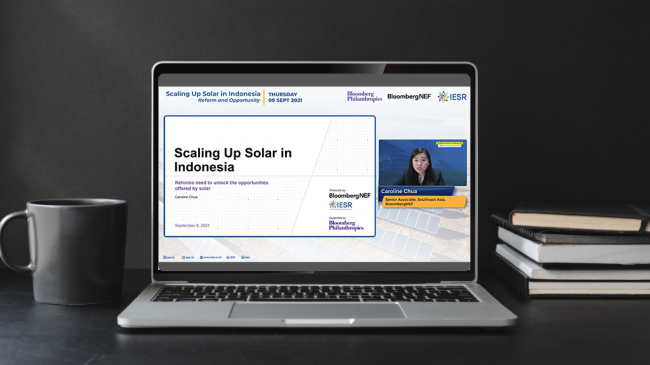 Jakarta, 9 September, 2021-In the past year, there was a dynamic change in the energy sector. The approaching deadline of the Paris Agreement and the latest IPCC AR6 report stated that our time shortened to keep temperature rise. It  has raised discourse about decarbonization and net-zero commitment from all around the globe. Rapid deployment of renewables is one of the keys to decreasing emissions as the energy sector is the biggest emitter. In fact, the cost of clean energy keeps coming down. Studies show that wind and solar are the cheapest for ⅔ of the world’s population which is about 77% of GDP and over 90% of the generations (BloombergNEF, 2020).

Solar energy will be the backbone of decarbonization due to its flexibility to be installed on various scales, from household size to utility size scale. Thus, it makes possible a massive solar deployment in Indonesia “Indonesia has a huge potential of solar energy, with the declining cost of a solar energy system and its ability to be installed in various power scales, it will enable more parties to take part of this collective action to not only deploying renewable energy but also to fight the climate crisis,” Fabby Tumiwa, the Executive Director of IESR summarized his speech during the report launching of Scaling Up Solar in Indonesia: Reform and Opportunity. 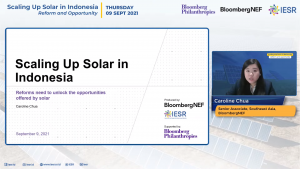 Caroline Chua, a Senior Associate of Bloomberg NEF Southeast Asia, as well as lead author of the report, emphasized that achieving Indonesia’s renewable target of 23% in 2025 needs double effort from the current condition.

“Indonesia’s 23% renewable energy target can be achieved by installing 18 – 23 GW of solar PV. Solar alone can help Indonesia to meet its 2025 target as it can be deployed rapidly and the technology is already available and getting cheaper day by day,” she said.

The economy of solar is getting more and more competitive, and in the future, it will outcompete coal power plants. The solar tariff in Indonesia has declined by 76% from 25 cents/kWh in 2015 to 5,81 cents/kWh in 2020. Daniel Kurniawan, IESR’s Solar analyst said that there is already interest from the market to bloom in Indonesia.

“The challenge here is really to replicate the solar procurement. I think the market is already sending a strong signal that they are interested in Indonesia and it can be achieved. The question now is how Indonesia can think not only to achieve its renewable energy target but also to decarbonize its energy system,” he said. 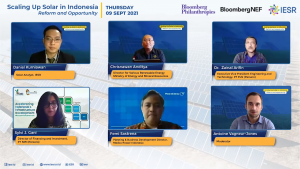 Earlier this year, PLN announced that it’s going to be net-zero emission by 2060. In their new draft of RUPTL the plan to retire old coal power plants is included.

Chrisnawan Anditya, Director of Various New and Renewable Energy, Ministry of Energy and Mineral Resources, agreed that solar will be the key to achieve Indonesia’s target as well as fighting climate change.

The commitment is renewed and updated to achieve net zero-emission, yet,  it needs to be manifested through concrete planning. So that all stakeholders in Indonesia can use this momentum to seize renewable energy deployment in Indonesia for a common and greater good in the fight against the climate crisis.

Semarang, 6 October 2021– With the technical potential of solar energy reaching 193–670 gigawatt peak (GWp), and the potential for generation from solar power plants

Jakarta, 11 October 2021– The energy crisis in Europe is a lesson for many countries, especially Indonesia to maintain their energy security by reducing dependence