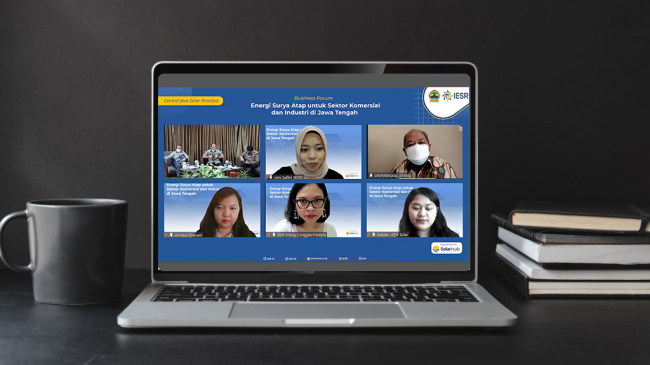 Semarang, October 06, 2021 – The Commercial and Industry sectors are potential partners to accelerate the penetration of renewable energy. The increasingly strong market demands for green products encourage the commercial and industrial sectors to switch to environmentally friendly technologies in order to maintain their existence in the global market. Solar PV is a strategic choice for the commercial and business sectors considering its relatively fast installation, as well as the availability of solar energy sources that are evenly distributed throughout Indonesia. In addition, investing in solar PV can reduce production costs.

Fabby Tumiwa, Executive Director of the Institute for Essential Services Reform (IESR) explained that currently in line with efforts to reduce greenhouse gas (GHG) emissions, the industrial sector is faced with the obligation of the economic value of carbon. Especially for goods that are exported such as to European countries, America and Japan. The carbon footprint of a product that exceeds the specified maximum will be taxed. In addition, public awareness about sustainability issues is increasing, as stated by a survey by WWF and The Economist which found that searches on search engines with the keyword ‘sustainability’ increased by more than 71% during 2016-2020.

“Shareholders of companies have asked that all these companies commit to use 100% renewable energy. So if we want Central Java to become an industrial center, access to renewable energy must be facilitated,” said Fabby at a webinar organized by IESR with the Central Java Government entitled “Rooftop Solar Energy for the Commercial and Industrial Sector in Central Java” (6/10/2021).

Chrisnawan Anditya, Director of Aneka EBT at the Ministry of Energy and Mineral Resources, explained that the government has given priority to the development of rooftop solar power plants considering its huge potential, fast installation, and very competitive prices.

“The medium-term strategy that is being pushed for the development of PV is rooftop solar which is targeted at 3.6 GW by 2025. In addition, we also continue to encourage utility-scale PV,” explained Chrisnawan on the same occasion.

To support infrastructure and services towards the energy transition, PLN must also improve on preparing grid adaptations and adapting to a business model that accommodates large amounts of renewable energy.

“This rooftop PV has an impact on the current PLN grid due to its intermittent nature. So PLN must provide a standby unit to supply electricity when the power generated by the PV rooftop cannot meet the existing electricity needs,” explained M. Irwansyah Putra, General Manager PLN Central Java – DIY.

Irwan also explained that in supporting the carbon tax mechanism, PLN has issued an REC (Renewable Energy Certificate). By purchasing this certificate, PLN will distribute electricity obtained from clean energy to the industry.

Questioning policies to encourage renewable energy in Central Java Province, the Head of the Central Java Province ESDM Office said that his party had prepared various policies. However, according to him, to encourage certain changes, in this case the transition from fossil energy to renewable energy (Solar PV-ed), policy support alone is not enough.

“Change will happen more quickly if it is driven by a market driven mechanism, so it’s not just complying with certain rules. The Central Java ESDM Office has tried to make policy packages that cover this market aspect with input from various parties such as the government, universities, and NGOs,” explained Sujarwanto.

Opportunities for the commercial and industrial sectors to adopt solar PV are getting wider with the availability of various Solar PV investment schemes such as installments and leases. Anggita Pradipta, Head of Marketing for SUN Energy, said that there are three schemes offered by SUN Energy for prospective rooftop solar PV customers, namely Solar purchase, Performance Based Rental, and Solar Leasing.

“For the commercial and industrial sectors who want to install solar panels but are constrained by the initial installation cost, we recommend taking a performance based rental scheme. With this scheme, the customer will be bound by a contract for 15-25 years, where all the costs of maintaining the solar PV unit will be borne by SUN Energy, after the contract ends, the assets will become the property of the customer,” explained Anggi.