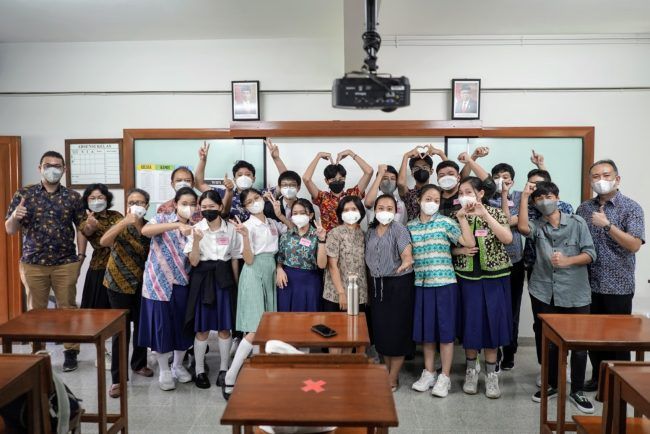 South Tangerang, May 23rd, 2022 – The energy transition is a global agenda whose impact will be felt in the medium-long term. Conducting research, agreement, and policy formulation are various efforts to urge stakeholders to take action in the “present days” that are expected to have an impact on the near future. Of course, in the long term, a fair & just energy transition must be encouraged and implemented to mitigate climate change.

However, have we ever thought that in the future, who will be most affected by the implementation of the energy transition? Of course, the younger generation. Thus, it is only fair to teach them from an early age to understand the concept of the energy transition. Because, in the future, policymakers in 2060, the year Indonesia targets to achieve net-zero emissions, are currently still in school.

As a concrete effort based on this understanding, the Clean, Affordable, and Secure Energy for Southeast Asia (CASE) project in Indonesia held an activity entitled “Teaching for Future” which was held at Santa Ursula School BSD, specifically for Class IX students. In this activity, CASE seeks to instill an energy transition mindset by initiating discussions and active teaching and learning activities involving students from Santa Ursula School BSD.

“Santa Ursula School actively and systematically provides teaching and learning activities related to climate change and renewable energy issues. It is hoped that students will have an understanding as to the initial capital for their real actions in the future.”

During the Teaching for the Future activity, CASE invited George Hadi Santoso, Vice President of Xurya Daya Indonesia, a company that provides installation and procurement services for rooftop solar panel systems, to directly attend the session and discuss with students of Santa Ursula School.

“I especially appreciate Santa Ursula BSD School and CASE Project who initiated this activity in an effort to support the energy transition process in the long term. I really hope that my presence here can be an inspiration for these youngsters in choosing a career in green jobs in the future,” said George, opening the discussion session in class. 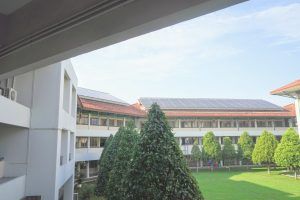 Santa Ursula BSD School is a school that has taken the initiative and is in the process of installing a rooftop Solar Power Plant (PLTS) with a capacity of at least more than 1 Megawatt peak (MWp). CASE Indonesia sees this initiative as a concrete action for schools to support the energy transition in Indonesia. In addition, CASE Indonesia hopes that this initiative can become a real example for students regarding the use of renewable energy and how non-governmental actors can play a role in supporting the energy transition. Coming from the same spirit (real action against climate change), CASE and Xurya also invite students to understand other things that can be done at their age to support the energy transition, such as energy-saving habits.

An interesting finding during the activity was conveyed by Agus Praditya Tampubolon, CASE Program Manager from IESR.

“It is very interesting how junior high school students can think further about the implementation of renewable energy, for example, we were asked about the risk of dependence on imported solar panels if Indonesia uses solar energy intensively. Findings like this, that students can think ahead and beyond, we hope, will be a good sign for Indonesia’s energy transition efforts in the future,” Agus explained at the end of the event.