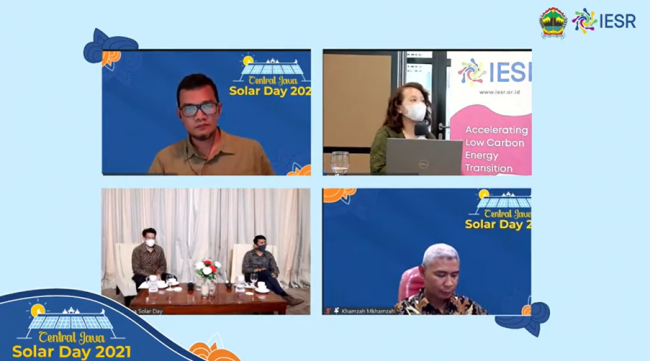 On this occasion, several stakeholders explained that there is a great opportunity available for Central Java to seize the big goals i.e: to be the first solar province in Indonesia. Central Java Solar Province was initiated in 2019, the webinar is also meant to track the progress of the initiative.

Dadan Kusdiana said that Solar PV is one of the priority solutions for fulfilling the clean energy mix by 23% in 2025 while reducing greenhouse gas emissions by 29% in 2030. He said that this is his concern in preparing a grand national energy strategy, to achieve an energy mix target of 23% by 2025.

“We only have five more years to go, so if renewables are not achieved, surely the target of reducing greenhouse gases will not be achieved,” he said.

Executive Director of IESR, Fabby Tumiwa, in his presentation, explained that based on the studies that have been conducted by IESR, the potential for solar energy development in Central Java is high, both for ground-mounted PV as well as for floating PV.

“According to the Ministry of Public Work and Public Housing Regulation No. 6/2020 that part of the reservoir area can be used for floating PV, we see that the technical potential of floating PV can reach more than 700 MW if the 10 largest reservoirs in Central Java are also used for floating PV mini-grid, “said Fabby.

He emphasized that in the future, “Central Java Solar Province” should not just be a slogan, but to achieve the highest possible results. One of the ways that his office will encourage in 2021 is by opening a consultation room for those who are interested in installing rooftop PV.

Sujarwanto also targets that the industrial and commercial sectors will be the main target to develop rooftop solar power plants. To make the investment cost for the rooftop PV more attractive, Sujarwanto encourages various financial institutions to get involved and explore the potential of a zero Capex financing scheme, or without the initial investment cost with soft credit.

Furthermore, he said that for 2021, the development agenda would focus on economic recovery after Covid 19 through the construction of roof-top PV at MSMEs and Islamic boarding schools. The construction of the rooftop PV 2021 will be carried out in 31 units in around eight districts/cities in Central Java.

Industrial customers such as Danone are one of the groups that have a great interest in using renewable energy, including rooftop solar power plants. Karyanto Wibowo underlined the commitment of various multinational companies to use 100% renewable energy in a certain year. Many of the RE100 members also have operational facilities in Indonesia, so the government must also look at this condition in planning and adjusting the electricity system.

According to Chairiman from ATW Solar, product knowledge from prospective users determines the level of adoption of the rooftop PV, so service and product providers (EPC companies) must ensure to build public awareness and that the quality of the product offered is assured. Comprehensive information regarding benefits, costs, and maintenance, and operational certainty are important factors for users to install roof-top PV mini-grid. The solarhub.id portal is an IESR initiative that is expected to be able to answer the imbalance of information for the public about solar energy in general and rooftop PV in particular.

Considering that Indonesia has a target to achieve a renewable energy mix of 23% by 2025, the penetration of rooftop solar is important because this is the most strategic way to do it at this time. Collaboration from various parties supported by clear policies and regulations will accelerate the penetration of solar energy in the national energy mix.