Jakarta, 03 November – President Joko Widodo at the 26th World Leaders Summit on Climate Change or COP-26 did not announce a firm statement about increasing Indonesia’s climate ambitions. The Institute for Essential Services Reform (IESR) views that the Indonesian government should be using this moment to lead and encourage the G20 countries to set compatible climate action with the Paris Agreement. However, in his speech at COP 26, President Jokowi seemed to hand over the responsibility to developed countries to determine the achievement of carbon neutral conditions in Indonesia. It showed the less ambitious state of the Indonesian government in dealing with the climate crisis.

“Indonesia should clearly state its climate ambitions, increase its Nationally Determined Contribution (NDC) targets and convey the funding needs from developed countries to achieve peak emissions by 2030 and decarbonization by 2060 or earlier. Unfortunately, the President did not state targets and plans for more ambitious mitigation actions in his speech,” said Fabby Tumiwa, Executive Director of IESR. He is also currently in Glasgow attending the COP 26 event.

The Climate Transparency Report, Country Profile of Indonesia 2021 finds that staying in the current NDC unconditional reduction target of 29%  will contribute to increased emissions (excluding the emissions from land use) to 535% above 1990 levels, or around 1,817 MtCO2e in 2030. Meanwhile, to stay below the 1.5˚C temperature limit, Indonesia’s 2030 emissions should be around 461 MtCO2e (or 61% above 1990 levels). This indicates an ambition gap of 1,168 MtCO2e.

“As a country that has quite large natural and mineral resources, such as nickel, Indonesia can raise its climate ambitions beyond the target of 29% by 2030. Moreover, if Indonesia with a large population has implemented energy conservation and efficiency since earlier, without the funds from a developed country, Indonesia can reduce carbon greater than the target in the NDC,” explained Lisa Wijayani, Manager of the Green Economy Program, IESR.

Furthermore, IESR observes that Indonesia’s plan, which was stated by Jokowi on the same occasion, to transition to clean energy is still constrained by regulations that have not yet been issued. Jokowi proposed to build the largest solar PV in Southeast Asia, but until today the Regulation of Minister of Energy and Mineral Resources No. 26/2021 Regarding Rooftop Solar Power Plants is still waiting for approval at the Ministry of Finance. Besides, the Presidential Regulation regarding new and renewable energy, which has been awaited since early 2021, has not yet been released.

“The Indonesian government should simultaneously issue appropriate regulations to create a more massive renewable energy ecosystem for development, as well as encourage investment from developed countries. Clear regulations and targets can open up greater opportunities for investors to invest in renewable energy,” added Lisa.

Not only that, but in his attention, Jokowi also plays an important role in carbon markets and prices in solving climate problems. This October, the government has issued the Law on Harmonization of Tax Regulations. A carbon tax of IDR 30 per kilogram of carbon dioxide equivalent will be applied to the number of emissions that exceed the stipulated emission limits (cap and tax).

Jakarta, 19 October 2021– Indonesia has updated its climate commitments through its Nationally Determined Contribution (NDC) to achieve carbon neutrality by 2060 or sooner. Indonesia’s commitment which is ten years behind the target of the Paris Agreement implies the government’s unambitious efforts in responding to the climate crisis that threatens the lives of the Indonesian people.

Fabby Tumiwa, Executive Director of the Institute for Essential Services Reform (IESR) said that the problem of reducing greenhouse gas (GHG) should not be seen as a burden but as an opportunity to transform into a low carbon economy.

Fabby added that the community will feel the economic benefits by the creation of new industrial opportunities that can absorb a larger workforce. Moreover, Indonesia’s energy prices will be more affordable by using cheaper renewable energy technologies and cleaner air. He said that the compatible climate ambitions with the Paris Agreement will lessen the threat of hydrometeorological disasters as a consequence of increasing the earth’s temperature exceeding 1.5 degrees Celsius.

The absence of a climate emergency declaration by the government, according to Melissa Kowara, Activist, Extinction Rebellion Indonesia, indicates the government’s low level of seriousness in dealing with the climate crisis.

“There has not been a firm stance from the highest levels of the country to say that we are in a crisis. (There is no declaration that says-ed) that we will do everything by the private sector, civil society, and government to overcome problems that affect the lives and survival of all of us,” said Melissa. She said this is also the cause of low public literacy regarding climate change.

“Even if there is (climate discourse-ed), yet it is not the top priority issue. Therefore, climate change literacy is also necessary for religious leaders because religious life is impossible to prevail in the climate crisis,” he explained.

Furthermore, Jimmy Sormin, Executive Secretary for Witness and Integrity of Creation, Communion of Churches in Indonesia (PGI), encouraged religious leaders to play their role in increasing people’s understanding of climate issues by discussing them according to the local context.

“In the regions, the impacts of climate change, such as the emergence of new pests, crop failure, are experienced by the community, but they do not understand it. It is necessary to ‘rationalize’ it according to their perspective (the local community-ed),” said Jimmy.

Looking at the issue of climate change from a woman’s perspective, Mike Verawati Tangka, Secretary-General, Indonesian Women’s Coalition (KPI) believes that the climate change effect has a close impact on women’s lives. However, Mike regrets that environmental issues and change tend to be considered as masculine issues that override the role of women in caring for nature and advocating for climate issues.

“The impact of climate change is perceived the most laborious by women because our policies and systems are not prepared inclusively. Positive initiatives taken by women by advocating for climate change must also be recognized by the state,” said Mike

Jakarta, 28 April 2021 — President Joko Widodo’s speech during the Leader Summit on Climate Change which stated that he would seriously tackle the issue of the climate crisis was considered less ambitious by a number of parties. This is because President Jokowi’s statement emphasizes the FOLU sector (Forestry and Land use Conversion), while the energy sector, which will be the largest contributor to emissions in the future, was not even mentioned at all. Meanwhile, on the same occasion, a number of country leaders expressed their commitment to reduce emissions and their target to be carbon neutral. Indonesia through the Ministry of Environment and Forestry has released a 2050 Long-term Strategy on Low Carbon and Climate Resilience (LTS-LCCR) which targets that Indonesia will become carbon neutral by 2070. Institute for Essential Services Reform (IESR) ) views this target as less ambitious and shows the government’s half-hearted efforts in dealing with the climate crisis.

Responding to this, IESR continues the discussion series #Before2070 to see Indonesia’s opportunities to achieve carbon neutrality by 2070. This webinar is the second part of a series of #Before2070 webinars aimed to encourage the government to make more ambitious climate policy targets. Indonesia’s target to become carbon neutral by 2070 is considered inconsistent with the Paris Agreement commitment that was signed by Indonesia in 2015 and ratified by Law no. 16 of 2016.

Preparing a Long-Term Strategy towards being carbon neutral by 2050 is the obligation of each country that signs the Paris Agreement. However, the LTS-LCCR 2050 document that is owned by the government has become a debate and has caused controversy even among the government itself. This can be seen from the inconsistency of documents and explanations between government agencies regarding Indonesia’s carbon-neutral targets.

For example, the Ministry of Bappenas previously explained about Low Carbon Development in Indonesia (LCDI) which offered several scenarios if Indonesia became carbon neutral in 2045, 2050, 2060, or 2070 and its implication to Indonesian economic growth. 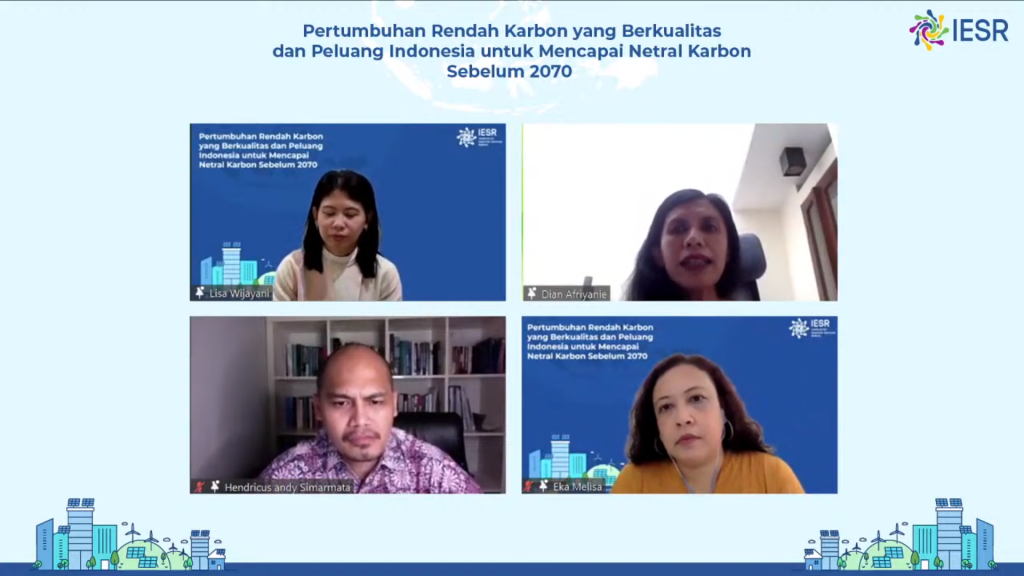 “Climate commitments must be integrated with national development programs. Indonesia’s commitment to achieve net zero-emission has been stated in the RPJMN, ”explained Medrilzam, Director of Environment at Bappenas. He also emphasized that there should be no trade-off between economic growth and efforts to reduce emissions. According to him, achieving carbon-neutral requires a lot of funds. Therefore, apart from cooperation and multi-stakeholder commitment, Indonesia needs to receive strong support from international countries.

From the energy sector, Agus Cahyono Adi, Head of the Center for Data and Information at the Ministry of Energy and Mineral Resources, said that his party is preparing to support Indonesia in achieving net-zero emission to meet energy needs with various efforts.

“The energy sector is an important sector in the net-zero emission plan because we are one of the emission contributors. In addition to reducing emissions, we are also trying to increase energy demand. Increasing renewable energy and the use of clean fuels play an important role in increasing energy demand, “said Agus.

However, his party has not dared to announce a target figure or deadline to become carbon neutral from the energy sector.

“For each choice that we will take, we need to consider the aspects of availability, accessibility and affordability,” he explained.

To achieve carbon neutrality, more innovative efforts are needed, especially through developing an investment climate such as carbon trading. Kus Prisetiahadi, Assistant Deputy for Climate Change and Disaster Management, Coordinating Ministry for Maritime Affairs and Investment (Kemenko Marves) explained that currently the Presidential Decree for the value of the carbon economy is a guideline for GHG emission reduction and low-carbon national development is still being drafted. There are at least 8 regulatory components in this Presidential Decree and the marine sector is one of the sectors that will be developed for efforts towards mitigation.

Dian Afriyanie, Lokahita senior researcher, highlighted the lack of integration across sectors and scales in policymaking. This results in policy products that often feel out of sync between one ministry/agency and another ministry/institution.

Furthermore, Eka Melissa, Senior Advisor of The Partnership for Governance Reform, emphasized that low-carbon development should be seen as an opportunity to develop the country, be environmentally friendly while meeting the targets of international agreements.

“I see that Bappenas has seen it (as an opportunity) but other ministries seem to still see it as a proven challenge from the various documents produced. Low carbon development is still seen as an obstacle and a challenge,” she said.

The role of local government is considered very important in achieving carbon-neutral development. Andy Simarmata, Chair of the Indonesian Planning Experts Association (IAP) gave a view that the government and other relevant stakeholders can campaign for carbon neutrality down to the regional level so that it can be translated into the RPJMD (regional medium-term development planning). Incentives for the business world, especially the pattern of business behavior, also need to be provided in addition to encouraging the technology.

For climate commitments, especially targets to be carbon neutral, each related party needs to see the current climate situation as a crisis that requires a quick and precise coping strategy. The more we postpone dealing with the climate crisis, the greater the costs and the heavier the efforts that must be made in the future.