Jakarta, 15 November 2022- Presidential Regulation No. 112/2022 on the Acceleration of Renewable Energy Development for Electricity Supply mandates the Ministry of Energy and Mineral Resources (MEMR) to develop a roadmap for the early retirement of the coal-fired power plants (CFPP). It is in line with Indonesia’s commitment to the Global Coal to Clean Power Transition declaration at the Conference of the Parties 26 Summit (COP26 Summit), which considers the early retirement of coal-fired power plants in the 2040s, with international funding and technical assistance, and achieving the Net Zero Emission (NZE) target by 2060 or earlier as stated by President Joko Widodo.

The Institute Essential Services Reform (IESR) views that the government’s goal needs to be supported by various parties, including Independent Power Producers (IPP), who currently operate more than 15 GW of power plants in Indonesia.

“Indonesia Independent Power Producers (APLSI) supports the Government of Indonesia’s plans and policies that encourage decarbonisation and energy transition. We are ready to transform to continue contributing to an independent, increasingly environmentally friendly and sustainable national electricity, to support the Indonesian Government’s Net Zero Emission target,” said Arthur Simatupang, Chairman of APLSI, at the declaration of the Just Energy Transition Initiative by Indonesian Power Producers organized by IESR in collaboration with APLSI in conjunction with the 2022 Indonesia G20 Summit in Bali.

“APLSI wishes to optimize the role of the private sector as a government partner in building a reliable electricity system based on just energy transition by diversifying investment in power plants from various renewable energy sources whose potential is huge in Indonesia,” Arthur explained.

It has also been stated in the Expression of Interest between APLSI and the Indonesian Chamber of Commerce and Industry (Kadin Indonesia) at the Kadin Net Zero Hub event at the B20 Indonesia Summit. At that event, Arthur mentioned that his party had signed an agreement to conduct an intensive joint study on the diversification of power plant investment so that the role of the private sector would be optimal in realizing low-carbon economic growth by partnering with the government in building a reliable, independent electricity system, and a just energy transition.

Furthermore, IESR said that a just energy transition would run with the availability of space for renewable energy development, including by terminating the operational period of CFPP more quickly.

“The IESR study found that to be consistent with limiting temperature rise to 1.5°C, all CFPPs, that are not equipped with carbon capture, must be retired before 2045. In the period 2022-2030, at least 9.2 GW of power plants must be retired, of which 4.2 GW comes from private electricity, without which it will be difficult to achieve NZE,” said Fabby Tumiwa, Executive Director of IESR.

On the same occasion, Rida Mulyana, Secretary General, MEMR, said the importance of partnership to decarbonise the energy system. He explained that based on Presidential Regulation 112/2022, Indonesia plans not to build new coal-fired power plants after 2030 except those that are committed or under construction.

Furthermore, Wanhar, Director of Electricity Program Development at the Directorate General of Electricity, MEMR outlined a roadmap for the early retirement of coal-fired power plants in Indonesia.

Through his presentation, Wanhar explained that the government also took various steps to achieve the NZE 2060 target, including ensuring the retirement of CFPP owned by IPP after the power purchase agreement (PPA) was ended, and Combined Cycle PP retired after the age of 30.  Furthermore, starting in 2030, there is an increasingly massive development of solar power plants, followed by wind power plants both on land and offshore starting in 2037.

However, Wanhar emphasized, several provisions need to be fulfilled in terminating the operational period of coal-fired power plants in Indonesia.

“Retirement of CFFP can only be done once grid reliability is ensured, with substitution from renewable replacement and/or transmission system installation, the assurance of just transition of a fair energy transition. There should not be any negative social impact from coal plant early retirement, affordable renewable energy generation prices, and the availability of international financing support,” Wanhar explained.

Based on IESR’s “Financing Indonesia’s Coal Phase-out” study with the Center for Global Sustainability, University of Maryland, to retire 9.2 GW of coal-fired power plants by 2030, Indonesia needs international funding support to meet the cost of retiring the power plants, around USD 4.6 billion by 2030.

Supporting decarbonisation efforts in the power sector, the Government of Indonesia will work with the International Partners Group (IPG) to realize investment plans to support the early retirement of coal-fired power plants as well as other low-carbon technologies. The cooperation will support the achievement of Indonesia’s electricity system decarbonisation targets, including achieving peak electricity sector emissions of 290 million tonnes of CO2 by 2030, preparing CFPP projects that must be retired early, and ensuring the achievement of a renewable energy mix of at least 34% by 2030.

“For the early retirement of coal-fired power plants, especially those owned by IPPs, to take place with the principle of just energy, the government must form a national commission or task force involving relevant government agencies by the end of this year. Its tasks include comprehensively assessing the list of coal-fired power plants that have the potential to be retired immediately, as well as renegotiating with IPPs,” explained Deon Arinaldo, Energy Transformation Programme Manager, IESR.

Deon added that CFPP contract negotiations between PLN and IPP must begin by considering the potential for additional costs without jeopardizing the investment climate in Indonesia.

The Declaration of Supporting the Roadmap of Just Energy Transition was carried out to coincide with the G20 Summit. This is expected to provide a positive signal for the Indonesian Government’s leadership at the G20, which also highlights the energy transition or the transition from polluting energy to renewable energy as one of the main issues.

“Indonesia’s leadership in conducting early retirement of power plants to accelerate the energy transition will create a good precedent for other G20 countries.  The spirit to accelerate the end of CFPP operations through the declaration of IPPs  supported by the government and PLN will be an example for India, which will hold the G20 presidency in 2023 and become an example for other ASEAN countries in Indonesia’s leadership in ASEAN in 2023,” concluded Fabby Tumiwa.*** 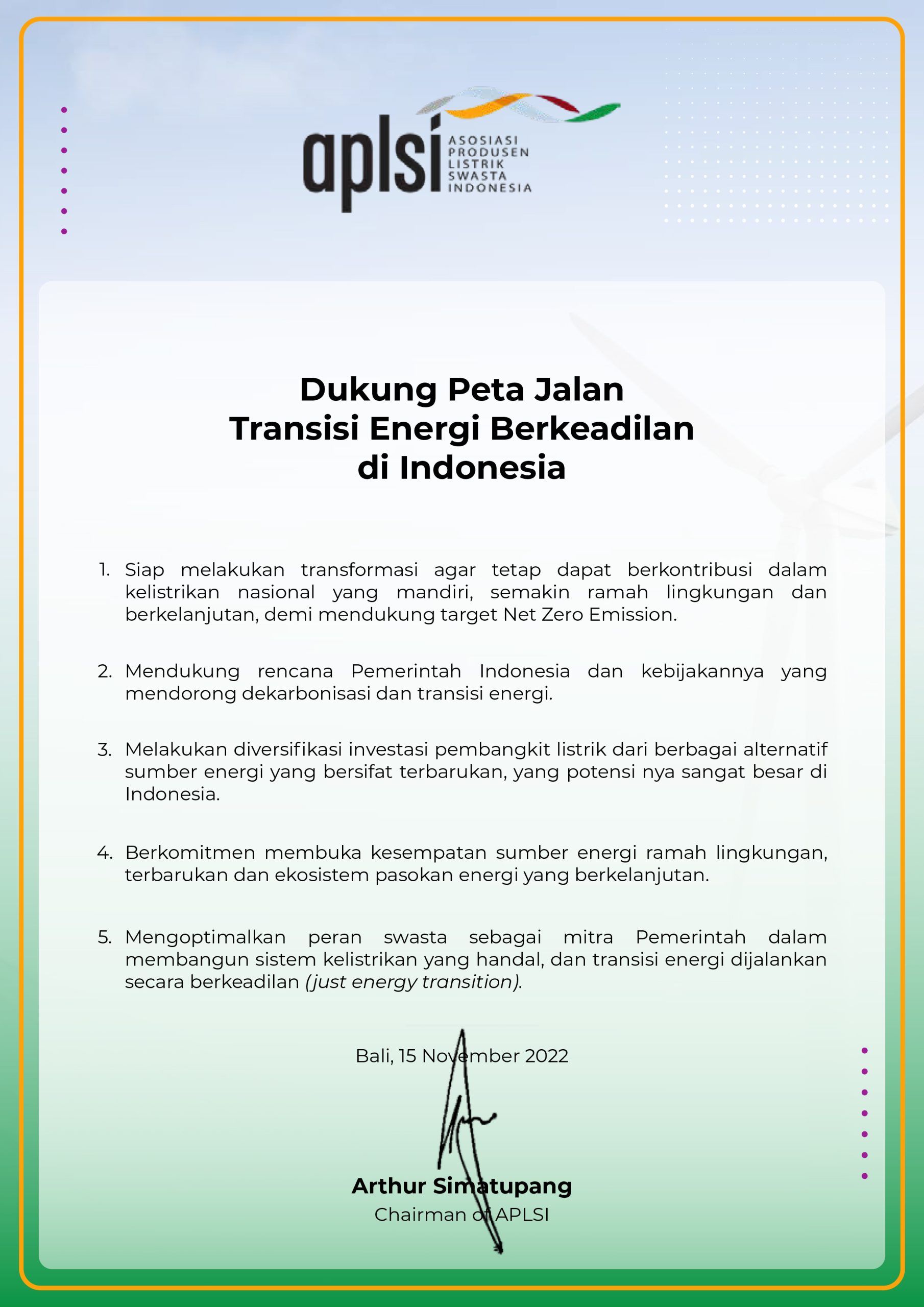 Support the Roadmap for a Just Energy Transition in Indonesia