The new decade started with a terrifying kick-off. Extreme rainfall occurring from the west of Indonesia from Banten and Jakarta to East Nusa Tenggara, which is nearer to the ravaging bushfires of Australia, raised questions as to what has really caused this calamity.

Various factors are suspected as the culprits and climate change is one of the most mentioned. Indonesia as one of the world’s largest emitters of greenhouse gas surely needs to pay more attention to this matter.

Other than land use that contributes substantially to climate change, excessive fossil fuel consumption also plays a key role in this phenomenon. Sadly, the main solution to reduce fossil fuel usage through renewable energy has made very questionable progress in this country.

Indonesia actually has an ambitious target for its renewable energy development.

The latest data from the National Energy Council show that these sources of energy only contribute around 9 percent of the total primary energy supply. Furthermore, various reports also suggest that progress in achieving the target is unsatisfactory.

The Institute for Essential Services Reform (IESR) just released an outlook in December 2019 that stated Indonesia was set to miss all of its 2019 renewable energy targets. These include the targets ratified in the National Medium-Term Development Plan, with a deficit of around 58 percent of renewable power generation capacity, while the One Million Rooftop Solar Initiative produces less than 20 megawatts of its gigawatt target.

Even from the government side, the Energy and Mineral Resources Ministry has also admitted to missing targets even though it argued that the Agency for the Assessment and Application of Technology was using impractical assumption, notably in national economic growth.

The 23 percent target was based on 7 to 8 percent growth per year while national economic growth is stagnant at around 5 percent. The ministry believes the renewable energy portion will only reach 13 percent in 2025 with current growth.

However, instead of blaming wrong assumptions and the now already official target of renewable energy, the government would better acknowledge the slow progress and address the real problems in order to increase the renewable energy portion in the energy mix. Based on numerous analyses, several issues are the most pivotal that constrain progress in national renewables development.

Among these is the pricing scheme. The International Institute for Sustainable Development stated in its report that the power purchase prices are simply too low, thus developers cannot recover their investment and turn a reasonable profit from their renewable energy business in Indonesia.

In addition, the current system of pricing does not really benefit renewable energy and even favors fossil fuels, especially coal, through subsidy and fiscal support, which diminishes the competitiveness of renewable energy.

Inconsistent regulations are considered by many stakeholders to be an important problem to solve. Recurrent policy changes, regulatory setback and erratic implementation ebb the investors’ interest to put their money into developing renewable energy projects in Indonesia. As quoted in the IESR report, investment in renewable energy has been stagnant for the past five years, which shows the low investment attractiveness in Indonesia.

Strong state control in the power sector is also considered an obstacle for renewable energy development. Research from Queensland University, Australia, has concluded that rigid state control across Asian nations including Indonesia does not necessarily lead to favorable output.

Numerous countries that perform electricity market reform to have more private party involvement in the power sector value chain have successfully increased their renewable energy portion. In another research study, many stakeholders believed strong control from the government could present conflicts of interest such as the provision of fossil fuel generators, instead of renewable energy-sourced plants in a rural area, only because the generators are owned by the state electricity company.

Beside those issues, many other studies mention more aspects to work on from political, economic, or technology perspectives, toward boosting our renewables. These findings should be a wake-up call for the government if they are really serious about at least getting closer to the target in 2025. Collaborate and listen more to other stakeholders such as developers, researchers and investors, to generate solutions that could benefit all parties.

Consistent regulation and implementation in the renewable energy sector are absolutely necessary to rebuild investors’ trust and increase attractiveness. Finally, if the government thinks renewable energy is indeed Indonesia’s future, there is no harm in following other developing countries in unbundling their electricity market to increase the renewable energy portion through transparent market dynamics. 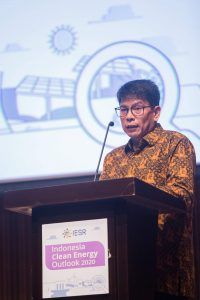