Jakarta, 26 January 2022 – The energy sector which is dominated by fossil energy accounts for ⅔ of global emissions. In order to reduce greenhouse gas (GHG) emissions exponentially, massive use of renewable energy is an important thing to do. One of the efforts to empower 100 percent of the technical potential of renewable energy, which is widely spread across all provinces in Indonesia, is the construction of an interconnection of the archipelago’s electricity network.

“This is to support the 2060 net-zero emission plan. One of the things we want to encourage is the use of NRE, but many NRE sources are far from the many demand sources in Java. So we have to transmit that energy to our load center,” Jisman explained.

Jisman said that his party encouraged PLN to complete interconnections within major islands in Indonesia, which is expected to be fully completed in 2024, later to be connected between islands gradually. 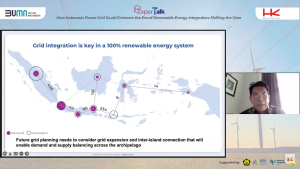 Jisman admits that building this transmission system takes a lot of investment. So the ministry is making a study about priority, to analyze and determine which transmission will be built first. Furthermore, Jisman also mentioned the potential inclusion of this transmission development plan in the Problem Inventory Draft (DIM) of the NRE Bill to ensure the priority of the work.

On the same occasion, Fabby Tumiwa, Executive Director of IESR, believes that this interconnection system should be seen as an investment, not a burden from the choice of shifting to clean energy.

“According to IESR, Indonesia has abundant renewable energy potential. For solar alone, the potential can reach 7,700 GW with the largest potential based on land suitability, located in East Kalimantan, Central Kalimantan, and South Kalimantan,” said Fabby.

Fabby also revealed that the initial investment needed for grid interconnection development until 2030 is still relatively small, around USD 3.3 billion because there is no inter-island integration yet. However, the required investment will increase in 2040 and 2050, respectively at USD 34.8 billion and USD 53.9 billion. 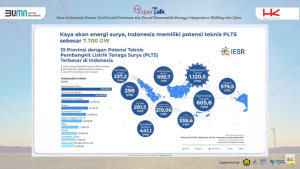 Other benefits that Indonesia can enjoy from inter-island grid interconnection include increased reliability and concentrated power reserves.

“For instance, excessive power reserves in Sumatra can be sent to Bangka, and vice versa,” said Fabby.

In addition, an integrated inter-island network can reduce investment requirements for developing new power generation. According to him again, the interconnection of the grid will create a diversity of generation mix and supply security, which is different from fossil energy systems that only come from one energy source. Furthermore, Fabby explained that if this interconnection system is already running, the cost of generating renewable energy will decrease by 18% – 46% by 2030.