The magnitude of the electric vehicle penetration target certainly needs to be accompanied by a supporting ecosystem such as the availability of charging infrastructure, various models of EV, as well as incentives for electric vehicle users. Zainal Arifin, executive vice president of engineering and technology at PLN, at the IETD 2021, said that to answer the needs of the electrical energy ecosystem, the government opens opportunities for the private sector to develop charging infrastructure. So far, the adoption of electric vehicles has not been very encouraging. Until 2021, there were 5486 units of two-wheeled vehicles and 2012 four-wheeled vehicles have been certified. However, the adoption rate is still 654 units of electric cars.

The limited number of public charging stations is one of the factors that discourage potential consumers from buying electric vehicles. People need assurance if they run out of power in the middle of the trip, there are many charging stations available. 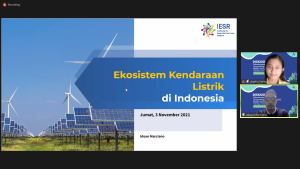 Although for a measured distance, this charging issue can be anticipated and calculated, but, it is necessary to consider the ratio between the number of vehicles and the SPKLU (Public Charging Station). If we fulfill the government’s target, the ratio of electric vehicles to SPKLU will be around 1:70. This ratio is still too small and causes anxiety when people use electric vehicles because of the limited number of charging spots.

“The government must have an attractive business model to provide massive charging stations so that investors are interested in taking part in the project,” explained Idoan Marciano, Electric Vehicle Specialist, IESR.

Particular attention can be paid to the development of faster two-wheeled electric vehicles to encourage penetration in society. The price difference, which is not as much as 4-wheeled vehicles, will be one of the driving factors for the electrification of two-wheelers. In addition, the public procurement of official vehicles for the government and public transportation can be a good strategy to transform the transportation system in Indonesia.