Utilization of Rice Husk as Energy

Sarihusada Generasi Mahardhika – Prambanan Factory inaugurated the construction of a rice husk-fired Biomass Boiler in June 2022. The biomass boiler will use 10,500 tons of rice husk annually and can produce up to 6 tons of steam per hour. With this ability, it’s no wonder this rice husk-fired industrial biomass boiler is claimed to be the first in Central Java.

Rice husk is an agricultural waste sourced from several areas in Central Java Province, including the surrounding agricultural land within this Biomass boiler facility, which is one of the most significant contributors to rice production nationally. Joko Yulianto, Plant Manager of Sarihusada Prambanan Factory, stated that the biomass boiler operated by Sarihusada could reduce carbon emissions by 8,300 tons of CO2 or the equivalent of carbon emissions absorbed through planting 120,000 trees. It also reduces the carbon footprint generated from the production process at the Prambanan Factory by up to 32%. 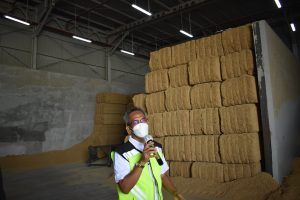 “Biomass boilers are an alternative to environmentally friendly technology. The energy produced comes from natural renewable sources. In the form of biological elements such as dead organisms or living plants, “explained Joko Yulianto.

The IESR Study 2021 assesses the potential for biomass in Indonesia to reach around 30.73 GW, but the efficiency is still in the range of 20-35 percent. The use of biomass in the industrial sector is becoming increasingly popular with the emergence of sustainable business targets. Therefore it must ensure a reliable supply chain to ensure the availability of biomass sources. Biomass feedstocks include crop residues and other plantation product wastes such as oil palm, coconut, and sugarcane.

Solar Power Plants in the AQUA factory in Klaten 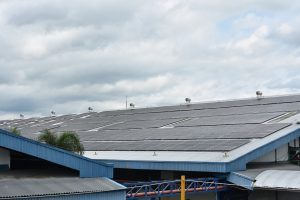 Meanwhile, PT. Tirta Investama-Aqua Factory, Klaten, inaugurated a rooftop solar power plant (PLTS atap) in 2020. The rooftop solar PV installed at the AQUA factory in Klaten consists of 8,340 modules of solar panels in four roof buildings covering an area of ​​16,550m2, with a peak power of around 350 watts per unit.

“This solar power plants can generate 4 GWh (Gigawatt hour) electricity per year which can supply 15-20% of electricity needs for operations while reducing 3,340 tons of carbon emissions per year. It was built starting in August 2019 and required 187,200 working hours carried out by 130 workers with zero accidents,” said I Ketut Muwaranata, Plant Director AQUA Klaten.

Based on the latest IESR report entitled Indonesia Solar Energy Outlook 2023, the industrial and commercial sectors are the biggest drivers of solar power plant use, reaching up to 23 MWp in October 2022. In addition to sustainable business targets, especially for companies that are members of the RE100 coalition, renewable energy also reduces production costs. Innovative financing schemes, such as the zero-CAPEX offered by many solar PV developers, increase the attractiveness of rooftop PV mini-grid for industrial customers.

In the last three years, the growth of rooftop solar PV users in the industrial sector has increased, and when the 10 to 15 percent limit of capacity currently imposed by PLN continues, this trend will change and even decrease. This is unfortunate and does not support the various energy transition commitments from the government and companies, who cooperate in realizing Indonesia’s net zero emission. 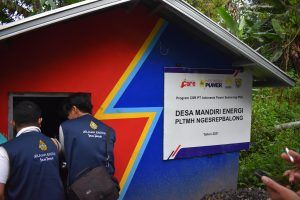 Based on the 2021 IESR study, the technical potential for micro-mini hydropower in Indonesia reaches 28.1 GW in all Indonesian provinces. In Central Java, the technical potential of micro-mini hydropower comes to 730.3 MW. If this potential is utilized optimally, it will increase the productivity of rural communities, thereby encouraging access to quality and affordable energy and improving the economy and people’s welfare.

The Micro Hydro Power Plant (PLTMH), Ngesrepbalong Village, Kendal Regency, was developed by the youth around 2020 and used for electricity at the Pucue Kendal Coffee shop, which is located on the northern slope of Mount Ungaran. In the process, the village youth got the state-owned company, Indonesia Power, to look at and help their businesses realize independent energy.

The PLTMH in Ngesrepbalong Village, Kendal Regency, has a capacity of around 1,000 watts and can turn on dozens of lights to illuminate the 200-meter road to the coffee shop and turn on the coffee processing equipment in the shop.

Technical potential estimates represent the achievable electricity generation potential (terawatt-hours), including its capacity potential (gigawatt-peak) and suitable land area (square kilometers), given the topographical (geographical) and land-use constraints as well as PV system performance. The technical potential is different from economic or market potential, as it does not consider projected costs and policy and regulatory limits (other than those related to land-use), and thus, do not represent the level of the generation that might actually be deployed, but rather an upper-boundary estimate of development potential. Using publicly available GIS data, this report covers both national- and provincial-level results of Indonesia’s spatial analysis and focuses on large-scale (utility-scale) ground-mounted solar PV applications.

The analysis of this report is the first step of a series of activities to assess potential solar PV projects in Indonesia and provides an overview of national solar power potential before zooming in to the potential regions. The estimation of the technical potential starts with first assessing the suitable areas and terrain for solar PV development. Then, by considering the solar resource potential in the areas and taking some technology-specific assumptions, the technical potential can be calculated. Several constraints to determine the suitable areas include certain terrain features (e.g., ground slope), protected areas, land-use restrictions, water bodies, and others. 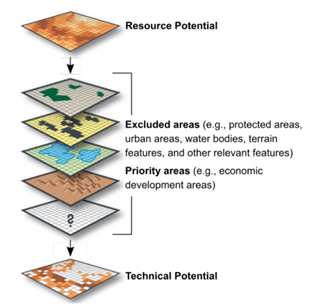 Our findings show that Indonesia’s solar PV technical potential ranges between 16 to 95x larger compared to the current national estimates by the Ministry of Energy and Mineral Resources (MEMR), which is 207 GW (see Table 4). 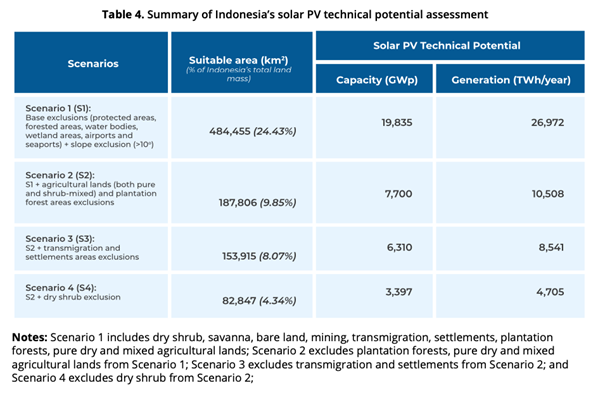 As the assessment goes into provincial and cities/regencies level, the findings can be used to inform policymakers, PLN, business players, and other relevant stakeholders to accelerate solar development in Indonesia, starting by updating Indonesia’s solar potential figure and identifying potential solar projects across the country.

Here are some of the key recommendations that policymakers and PLN could do:

The 23% target of the renewable energy mix in 2025 in the National Energy General Plan (RUEN) until the end of 2020 has only reached around 11.5%. For the next 5 (five) years, the government still has prominent homework to achieve this target. Based on the results of the Institute for Essential Services Reform (IESR) study, one of the potentials that the government can optimize for the acceleration of renewable energy is by developing massive solar power plants.

IESR has calculated the technical potential of residential solar energy in Indonesia. As a result, by using the highest scenario, Indonesia has a potential of 655 GWp (IESR, 2019), with Central Java being one of the top three provinces with the highest technical potential. The market potential study conducted with a survey in 7 cities in Central Java for 3  (three) different sectors also showed significant potential early adopters and early followers: 9.6% for the residential group, 9.8% for business/commercial, and 10.8. % for small and medium entrepreneurship. Central Java also has the potential for floating PV, which is quite large, from 42 dams scattered throughout the province.

In one year since it was declared, according to the records issued by the IESR in the Indonesia Energy Transition Outlook (IETO) 2021, Central Java increased its solar energy capacity to 5.1 MWp with a total of 147 users, compared to only 155.2 kWp and 40 users in September 2019 The largest increase came from the industrial sector, as much as 73% (3.7 MWp) of the total increase in installed capacity. The largest recent contributor was the Danone-AQUA 2.91 MWp rooftop solar installation at the Klaten plant. The rest are scattered in various sectors, including in the ESDM office building, provincial APBD projects, and the housing sector.

One of the supporting factors for the increase in the capacity and number of solar rooftop users in both the private and public sectors is the issuance of a Central Java Governor’s Circular Letter to use the solar rooftop.

However, to achieve the renewable energy mix target in the Regional Energy General Plan (RUED) of 21.32% in 2025; One of them is by a more aggressive penetration of solar energy, the Central Java ESDM Office sees that there are still many challenges to overcome; for example, uneven renewable energy literacy, low level of public awareness, limited availability of solar contractors/installers in the area, and long waiting period for bi-directional meter replacement.

The International Renewable Energy Agency (IRENA) reports that renewable energy (RE) has made up the majority of capacity additions for the last eight years. Its progress is in line with the development of innovation and competition in RE technology, which makes the price of RE cheaper than fossil energy in 85% of countries in the world. Moreover, in the UN Climate Action Pathway for Energy, IRENA maps that in 2025 all coal mining in the world will experience a drastic decline because it is no longer economical compared to RE.

The massive movement of the transition of fossil energy to RE or known as this energy transition was also recognized by Harris Yahya, Director of Various New and Renewable Energy. He explained the development of RE, especially solar energy, in the online event Opening the Solar Roof Market in North Sumatra. This event was organized by the Institute for Essential Services Reform (IESR) in collaboration with the Indonesian Solar Energy Association (Asosiasi Energi Surya Indonesia-AESI) and the Indonesian Employers’ Association (Asosiasi Pengusaha Indonesia-APINDO) North Sumatra in continuing the campaign for the National Movement of One Million Roofs (Gerakan Nasional Sejuta Surya Atap – GNSSA) which turned three years in last September. Following Central Java, which has committed itself as a solar province, AESI is now encouraging North Sumatra to utilize the potential of RE to meet its energy needs.

Harris explained that Indonesia is working on achieving the 23% RE mix target by 2025, while the accomplishment has been only 10.9%.

“One possible way to reach up with the RE energy mix is ​​by implementing solar power plants. Thus, the domestic industry can sustain with the RE industry, especially solar power, and it can open up green job opportunities and reduce CO2 emissions, “he said.

Harris believes that after the president signed the draft of the Presidential Decree regarding RE, the solar power plant will expand extensively. The provision of solar power plants is not only for PLN as a utility-scale but also for replacing diesel generators.

“We plan to use RE to substitute diesel power plants of up to 2,600 MW, either with solar or biomass energy,” Harris explained.

Irwansyah Putra, General Manager of the North Sumatra Regional Main Unit PLN, who was also in the discussion, said that his party fully supports government policies that encourage the development of solar power plants in North Sumatra.

On the same occasion, Fabby Tumiwa, Executive Director of IESR, underlined the immense potential of solar energy in Indonesia based on the results of the IESR study.

“Looking at the existing land capacity, the potential for installing solar power plants by utilizing ground mounting (open land) could reach 9,000 GWp with the potential to generate up to 13,000 TWh/year. With this huge potential, Indonesia can meet 100% of its energy needs from solar energy. The potential for rooftop solar in house buildings alone reaches 655 GWp, “he said.

The North Sumatra Energy and Mineral Resources (ESDM) Office, represented by Karlo Purba, Head of the Electricity Sector, explained that his party has begun to implement a strategy for using rooftop solar as stated in the draft RUED-P (Provincial Regional Energy General Plan) by setting the regulation to utilize solar cells at a minimum of 30% of government buildings, and 25% for luxury housing complexes, and apartments. He hopes to increase the interest of the public and commercial and industrial groups as well.

“The most favorite payment method is the performance-based rating scheme. Customers do not need to spend money on the initial investment in rooftop solar. The rooftop solar system will become fully owned by the customer after the contract ends, ”explained I Made Aditya Suryawidya, SUN Energy’s Head of Business Solutions.