The development of the electric vehicle ecosystem needs to be accelerated. Fiscal incentives for electric two-wheelers and restrictions on conventional vehicles are key to successful EV development in Indonesia 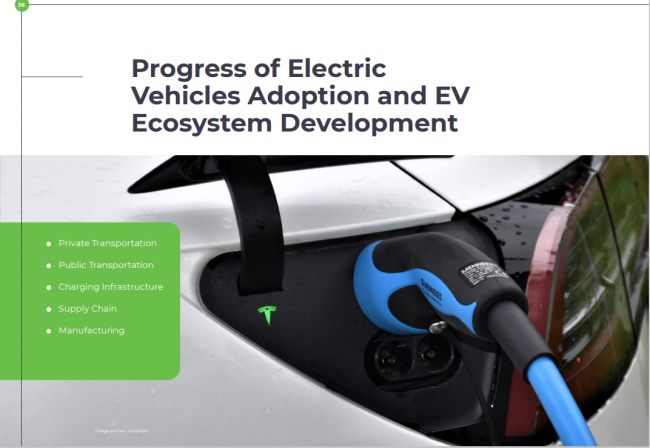 Despite the Ministry of Industry targets to increase annual electric vehicles (EV) sales to 400,000 units (passenger cars) and 1,760,000 units (motorcycles) by 2025, the current EV adoption rate is still low, writes Idoan Marciano, one of the authors of the Indonesia Energy Transition Outlook (IETO) 2021. By 2020, electric cars only reached 0.15% (229 units) of the 150,000 units sales/production target while electric two-wheelers at 0.26% (1,947 units) of the 750,000 units sales/production target. Looking at this trend, “it would be very challenging to hit the targets”, says Idoan.

In order to achieve the targets, it is important to build the electric vehicle ecosystem, which consists of five aspects: (a) charging infrastructure; (b) electric vehicle model availability and supply; (c) public awareness and acceptance; (d) supply chain for batteries and electric vehicle components; as well as (e) supporting policies (including incentives) from the government.

In 2020, derivative regulations of the Presidential Regulation 55/2019 were issued at both the national and municipal levels to provide fiscal incentives and support for charging infrastructure development. This is in line with what the author emphasizes in the report that to increase demand for EV, fiscal -as well as non-fiscal- incentives such as exemptions of VAT, income tax, and import duty or subsidies will be critical. Furthermore, financial incentives such as direct subsidies for developers of public charging stations (SPKLU) and public battery exchange stations (SPBKLU) are also needed to expand charging infrastructure networks in the country.

“Charging infrastructure development is paramount to overcome range anxiety issues. To date, the number of both SPKLU and SPBKLU is still limited, far from the targets. It is also worth noting that the current SPKLU target set on the roadmap will only give a 1:70 ratio (meaning 1 charger to serve 70 EV), much higher than what IEA recommends at 1:10 ratio (or lower when a country is still in its early stages of EV adoption). Responding to this, “the government should aim for a ratio lower than 1:25, emulating what has been applied in high-EV penetration countries such as China, the United States, and Norway”, says Idoan.

In addition, the author also underlines that the development of the local supply chain is necessary to ensure a self-sustaining EV development. Specifically, local production of lithium-ion batteries -the main component of EV- will be vital to help lower production costs of EV in Indonesia. Currently, the country has been building several production facilities for raw materials extraction and refinement of lithium-ion battery precursors. These facilities are scheduled to start their operations in the next 1-3 years. However, slow progress has been made in the battery cells and packs segments with local companies (including MIND ID, PT Aneka Tambang, PLN, and Pertamina) are still planning the development.

Meanwhile, despite the issue of a used battery shortage, the establishment of a local battery recycling facility should be appreciated. “The facility is expected to help bring about cost-efficient EV production while mitigating the environmental impacts that EV development may cause.”

The author further stresses the importance of local EV production, considering that “currently, all electric cars in the Indonesian market are imported as no local automakers have started EV production.” Recent commitments made by some of the global automakers to investing in EV production in Indonesia, however, bring the hope of establishing the EV industry in the country.

By contrast, at least there are 15 companies with a total production capacity of 877,000 units producing electric two-wheelers. However, demand for electric bikes is currently too low to match the supply. “The government, therefore, needs to provide necessary incentives to increase demand”, notes Idoan.

The report also underscores the importance of raising public awareness of EV, its advantages, available incentives, and other useful information such as charging locations to help increase demand for such a new technology. “Demonstration and promotion projects need to be increased through cooperation and partnerships between the government, automakers, transportation companies, and charging infrastructure developers”, says Idoan.

Finally, outlooking the EV development from 2021 onwards, the report proposes three actionable recommendations for the government. First, “the government needs to prioritize the development of electric two-wheelers as their adoption will be relatively easy due to price compatibility with conventional two-wheeled vehicles.” Additional fiscal incentives or direct subsidies to consumers, and other operational incentives are then necessary to help lower the total cost of ownership.

Second, “to see a significant increase in EV adoption in the country, the government should start restricting the use of conventional cars and motorcycles in major cities”. Lastly, “seeing the growing appetite from international investors, the government needs to ensure technology transfer will take in place through tight collaborations with foreign automakers. At the same time, the government should facilitate cooperation between domestic EV manufacturers and R&D institutions for the commercialization of domestically-made electric vehicles”, he concludes.