The G20 is Progressing yet far from the 1.5 degree Plan 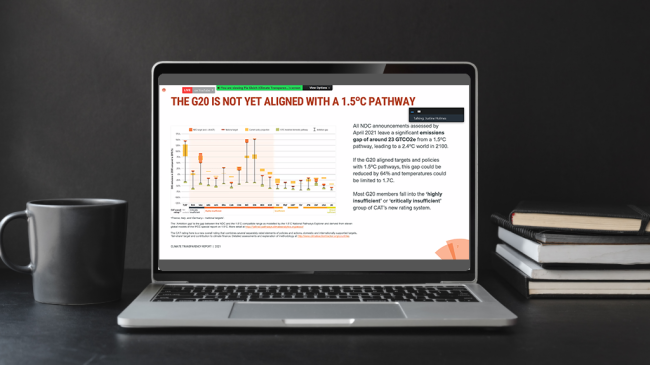 2021 is marked as the year of the rebound of emission especially in the G20 countries as the economic and social activity is restarting. Previously, emission in the G20 recorded a decrease due to government regulation to overcome the Covid-19 outbreak. Although 14 G20 states have proposed net zero targets which covers around 61 percent of GHG emissions in the world, it is still not aligning with the 1.5 degree Celsius pathway. Climate Transparency Report 2021 finds that some countries such as Argentina, China, India, and Indonesia are projected to exceed their 2019 emissions level. As the window of opportunity to comply with the Paris Agreement is getting narrow, the G20 countries need to raise their climate ambition higher and to move together fighting the climate crisis.

The Climate Transparency Report, an annual report reviewing the climate ambition and policy of the G20 countries, stating several key findings for the 2021 report that was launched on October 14, 2021. They are:

In the year of 2021, 14 G20 countries are updating their climate ambition and proposing a net-zero target. 13 updated NDC were submitted to UNFCCC and 6 of those countries i.e Argentina, Canada, EU (including France, Germany and Italy), South Africa, the UK and The US increased their NDC target, and that is good news. Unfortunately, all of them are not enough yet to comply with the 1.5 degree plan. By following the current ambition the global temperature will still rise up to 2.4 degrees. A more holistic and communal effort is definitely needed to keep the global temperature in the 1.5 degrees level.

“If the G20 were to align its targets and policies with one and a half degree pathways and implement those policies,  the global emissions gap of around 23 gigatons can be reduced significantly,” said  Justine Holmes, Solutions For Our Climate 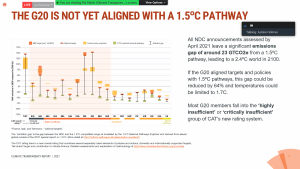 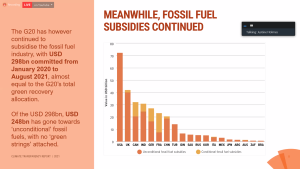 As the economic activity is restarting, emission in the G20 country is rebounding again. Total emissions in 2020 were decreased up to 6% and it is projected to rise 4% this year. Countries like Argentina, China, India, and Indonesia are even projected to exceed the 2019 emissions level. This is actually predicted, that the decreased emissions in 2020 are closely related to the social activity restriction during the pandemic outbreak. 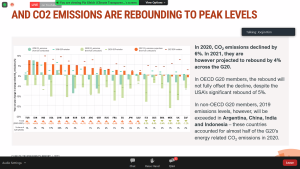 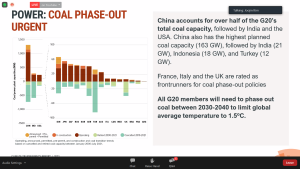 Fabby Tumiwa, Executive Director of IESR, during his presentation explained that currently Indonesia is still dominated by coal in its energy mix. In October, the Indonesian government issued a new RUPTL which accommodates more renewables share rather than thermal power plan, plus PLN plan to decommission the supercritical coal power plant starting from 2030.

“Recently we are also discussing the possibility to do an early coal moratorium before 2025 but it’s still the plan, not yet settled and we still provide subsidies on fossil fuel. Phasing out fossil fuel subsidies will help to expedite the energy transitions,” he concluded.

The energy transition has become a global necessity as an effort to mitigate climate change. Fossil energy burning is proven to contribute greatly to the

Executive Director of the Institute for Essential Services Reform (IESR), Fabby Tumiwa, said that the distribution of rice cookers could increase people’s electricity consumption, but

Executive Director of the Institute for Essential Services Reform (IESR), Fabby Tumiwa, explained the Government needed to explain the amount of the IDR 6.5 million