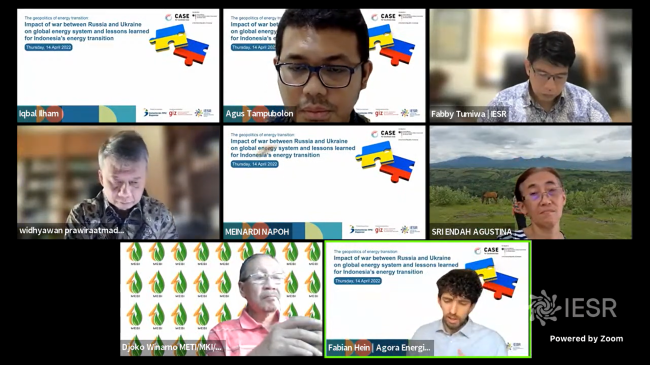 Russia’s political attitude which continues to carry out military action has put the ‘customers’ of Russian oil and gas in a dilemma. If they continue to buy oil and gas from Russia, they are indirectly contributing to the financing of the war. If they don’t buy the oil and gas, their energy security is threatened. Gas and oil currently available have also increased in price, which means higher costs.

Will the Russia-Ukraine war situation have an impact on Indonesia? The Clean, Affordable, and Secure Energy for Southeast Asia (CASE) project held a public discussion entitled “The Geopolitics of Energy Transition” to examine the impact of the Russia-Ukraine war on the global energy system and lessons learned for Indonesia’s energy transition.

“There are two approaches to dealing with this crisis. The first is a short-term approach by replacing gas with coal and oil. Second is a long-term strategic plan by increasing the capacity of renewable energy in the energy system,” Fabian explained.

Widhyawan Prawiraatmadja, a lecturer at SBM ITB, warned Indonesia to be careful in viewing and responding to this geopolitical issue.

“The issue of the current energy crisis is not only an imbalance between supply-demand, but there are other factors, namely war, so that energy commodity prices fluctuate and in the Indonesian context the government is in a difficult choice between providing more subsidies or increasing energy prices such as fuel,” Widhyawan explained. .

The choice of the Indonesian government to maintain the share of fossil energy and even provide subsidies through various policies is increasingly irrelevant in these times. The Executive Director of the Institute for Essential Services Reform, Fabby Tumiwa, stated that the lesson that can be drawn from the impact of the Russia-Ukraine conflict mainly on European countries is that dependence on one commodity is a threat to the energy security of a region.

“The IEA also criticized that European countries failed to implement the first principle of energy security, namely supply variation. Apart from depending on one type of commodity, Europe is also very dependent on one country as a supplier, this is vulnerable to the security of energy supply there,” he said.

Fabby continued, that the Russia-Ukraine conflict had a significant global impact on energy development. Renewable energy is more resilient in terms of price and supply due to its local nature. So developing renewable energy in Indonesia is increasingly becoming a necessity in the future to ensure energy security.