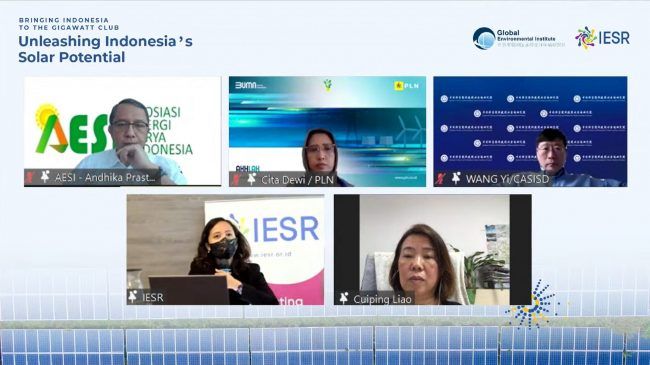 March 18, 2021 — Indonesia has a higher solar power technical potential than 207 GW, which the official data released by the Indonesian government through the Ministry of Energy and Mineral Resources in 2017. Institute for Essential Services Reform (IESR), in collaboration with the Global Environmental Institute (GEI), presented the result of their research in the launching of the study Beyond 207 Gigawatts: Unleashing Indonesia’s Solar Potential (18/3).

Fabby Tumiwa, Executive Director of IESR, in his speech explained that based on technical potential and land suitability, solar power in Indonesia could reach 3000-20,000 GWp.

“If the minimum technical potential, 3 GW, is utilized effectively, it can meet 7 (seven) times the electricity consumption of 2018,” he said.

Fabby added that this study recommends the government update data sources on renewable energy for providing a better signal for developing solar energy in the future.

“Indeed, it will also increase the confidence of various parties involved in solar energy development that Indonesia can rely on solar power to meet clean energy needs. Besides, this study supports PLN’s efforts to develop solar power and local governments in implementing the Regional Energy General Plan, ”he said.

At the global level, the Indonesian government can use the data to strengthen its commitment to global climate action, as stated by Jiaman Jin, Executive Director of GEI. GEI, in particular, has a program to assist developing countries in developing renewable energy by providing capacity building, technical and financial assistance.

“China and countries in Southeast Asia have collaborated on a global climate action program, including Indonesia. To achieve the Paris Agreement, today, about 29 countries have targeted carbon neutrality by relying on renewable energy. Other tools to be carbon neutral are carbon storage and carbon trading (carbon credit). These two things are also what China is currently developing, “he explained.

To achieve its commitments under the Paris Agreement, Indonesia is trying to reach the target of 23% renewable energy mix by 2025. Nevertheless, until the end of 2020, only 11.5% was realized. Meanwhile, in the National Energy General Plan (RUEN) itself, the government has a target for solar power development of 6.5 GW by 2025.

“However, the target is currently under review, and it turns out that solar (photovoltaic (PV)) is targeted to represent a third (17.6 GW) of the total net power generation of 48 GW by 2035 in the national energy grand strategy prepared by the Ministry of Energy and Mineral Resources and the National Energy Council (DEN). About 60 or 76 percent are expected to come from utility-scale solar power including floating solar PV, “said Daniel Kurniawan, Lead Author of the Study Report” Beyond 207 Gigawatts: Unleashing Indonesia’s Solar Potential “.

Daniel explained that out of 23 types of land cover, the IESR research team chose the suitable land type for PLTS development. Only 9 (nine) types of land cover were selected for mapping the technical potential of the PV mini-grid.

Using the most optimistic scenario, 9 (nine) types of land cover covering an area of ​​1.9 million km2, the results obtained from the calculation of the technical potential of PLTS are very abundant, reaching 19.8 TWp, which is 95 times higher than the government’s estimate.

Moreover, talking about the General Plan for Electricity Supply (RUPTL) (2021-2030) that is being drafted by PLN, Daniel explained that until today, there is no definite information regarding the allocation of the target capacity for solar power from a total of 3.7 GW of a combined capacity plan for power solar, water, and garbage in the upcoming RUPTL.

Furthermore, the latest technical potential study data launched by the IESR can also be used by local governments to optimize renewable energy development. Daniel gave an example of Bali and Sumba as two islands in Indonesia that already have sufficient capital in terms of the consistency of the local government in encouraging the use of solar power through the policies they issued and also have higher technical potential of solar power.

Director of Various New Energy and Renewable Energy of Indonesian Ministry of Energy and Mineral Resources (EMR), Chrisnawan Anditya, on the same occasion, said that his party would update the data on the technical potential of solar power in Indonesia.

Having comparable perception with Chrisnawan, the Executive Vice President of the New and Renewable Energy Division of PLN, Cita Dewi, said that PLN is committed to increasing the development of renewable energy. However, due to the COVID-19 pandemic, PLN is still dealing with conditions of low demand for electrical energy.

“The demand crisis is likely to last 2 to 3 years. However, our approach to pursuing renewable energy targets includes accelerating the completion of solar, hydro, geothermal power generation and considering converting 5,000 diesel power plants to solar. The potential of solar after converting is 2 GW, “said Cita.

From the developer side, Andhika Prastawa, Chairman of the Indonesian Solar Energy Association (AESI), said that the results of the study are beneficial for developers to explore more opportunities to invest in solar PV in Indonesia. Notwithstanding, according to him, this must still be in line with the government’s support in establishing friendly policies for solar PV developers.

“The economy of solar PV is already competitive, but until now the net metering regulation is still at 6.5, it should be changed to 1, so that it has a good psychological impact on the solar PV market,” Andhika added.

Agreeing with Andhika, Herman Darnel Ibrahim, a member of the National Energy Council hopes that there will be reforms in the net metering policy. He also emphasized that in terms of installation, solar PV is the easiest renewable energy to develop because it is available in almost all places in Indonesia, so it is easy to harvest in the form of the solar power plant, and has various scales so that it is quickly built.

Wirawan, Acting President Director, PT PJB Investasi appreciated the results of the IESR study and offered to calculate the technical potential of about 192 dams and reservoirs spread across Indonesia.

“The water catchment area in Indonesia is approximately 86 thousand hectares. This is also a huge potential for the development of floating solar, “he suggested.

Jakarta, 15 June 2022 – Indonesia has committed to no longer build coal except those already in the contract process. At COP 26, the Minister

Selengkapnya >
IESR: The Use of Rooftop PV in the Business Sector Brings Three Benefits at Once
24 June 2022 No Comments

Semarang, June 14, 2022 – The growing popularity of the climate change issue and environmental sustainability is slowly affecting people’s consumption and spending patterns in